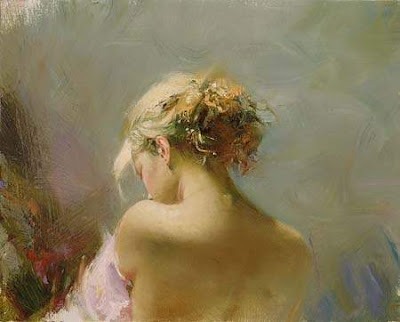 Leafing through Colette's book “Flowers and Fruit” I stumble upon this quote from “A Gardenia's Monologue”:


"That flower boasts of its heady scent [...]throwing the ignorant girl into a science I have taught her . . . and the round world reckons one more night of folly."

She then goes on to compare the heady aroma to orange blossoms and raw mushrooms, alluding to the flower's dirty underside that evokes the sweet, yet earthy decay that permeates its essence. I am wondering what she would have thought of Cruel Gardénia, the latest addition in the L’art et la Matière line by Guerlain. I had been postponing reviewing the fragrance immersed as I was in thought myself, dissecting it like an entomologist would do with a rare lepidopter for months.

Gardenias are elusive in that their heady sweetness cannot be accurately and abundantly extracted from the waxy petals. Therefore ingenious recreation should come to the play, trying to replicate the smell. Too often the compositions named "gardenia" smell anything but. Whether intentionally, like in Chanel’s paradigm ~which was actually inspired by a garden (therefore “garden-ia” and smelling of a mix of white flowers) and the decorative motif of the blossom popular in the 1920s~ or Goutal’s who driven by her dislike of gardenia despite advice that the US market asked for one went instead for rubbery tuberose in her Gardenia Passion, or unintentionally like by Floris, they pose their own enigma. Sometimes the experiment is quite successful in its photographic accuracy, such as in the budding Yves Rocher Pur désir de Gardenia or the creamy Lauder’s Private Collection Tuberose Gardenia, and other times in its tropical ambiance evoked such as in Kai.
Guerlain was faced with a dilemma: should they include a gardenia scent in their magnificent stable of exclusives? After all, gardenias with subtle clean musks backgrounds are supposedly very popular with American consumers and the fact that Cruel Gardénia in an unprecedented move launched first in the US and only some months later in Paris is quite telling in its own way. It seemed like hubris! Yet the result is exquisitely pretty and contradictory to its own name, being neither cruel, nor much gardenia-like. French wordplay on the expression l’art et la manière (=art and manner) produced fragrances that belie their baptism so far: the Rose wasn’t Barbare, Angélique was nowhere near Noire, Cuir Beluga was only imperceptibly leathery and only Bois d’Armenie was true to its name.

Perfumer Randa Hammami of Symrise worked along with art director Sylvaine Delancourt to ply damask rose, peach and neroli into this abstract gardenia accord, which is further enhanced by the popular rose-violet-orris combination that graces several powdery bestsellers of late such as Kenzo Flower or Guerlain’s own face powders in the Metéorites range and the accompanying limited edition scent. Indeed there is here the feel of an expensive makeup product along with a slightly metallic accord that rings melodiously throughout without ever being shrill. Examining the rose accord closer, I realize that it has none of the wine dregs or liqueur odor of many modern roses, such as Rose Barbare in the same line, or Stella Rose Absolute, which form the pillar of modern abstract roses in today’s perfumery.
In Cruel Gardénia this rose combination with orris is rendered powdery but not old-fashioned. It’s a beautiful white rose seen through a gossamer thin veil of fabric, its shape hazy although recognisable with a soapy latheriness that is very pleasant. There is none of the familiar dirtiness of ripe, aged cheese in the central stage, as there is no discernible gardenia in the way one is conditioned to expect it. The drydown of Cruel Gardénia has a mellow whisper of sandalwood and amber which garlands the innocent white musks lingering seductively for a long time and intensifying as time passes, reminiscent of other fragrances in the L’Art et la Matière line.

The overall intention was to render a skin veil (the "muscinade", a new Guerlain signature), a velvety soft aura that would put attention to the wearer instead of the fragrance’s profile itself. In that regard it is a departure from the classic French tradition of Guerlain and a wink to the American ideal of sensually “clean”, abstract musky florals such as Glow by J.Lopez, or contemporary clean “chypres” such as S.J Parker Lovely or Narciso Rodriguez for Her. This it does with conviction, pedigree and the air of cultured defiance to what is expected.
Cruel Gardénia is truly gorgeous, sensually feminine and ultimately a perfume that despite its lack of realistic depiction of a note or angular complexity will earn its wearer compliments on how sublime they naturally smell instead of how interestingly their perfume projects. A perfume to choose to seduce first and foremost one’s self. To quote Colette:


“a well-chosen perfume, linked to your moral person, to your physical charms, a perfume your friends love and recognize, one that surprises people you meet for the first time and that makes them dream”.

And for our readers, a small draw: a sample of Cruel Gardenia. Leave your name in the comments if you want to participate.

$220 for 80 ml bottle with detachable atomiser, available in Guerlain boutique in Paris, Bergdorf Goodman in New York, and Neiman Marcus in San Francisco.
Adding: One of our readers, Kim, mentions that the Toronto boutique in Canada also carries the line.

For another take on the perfumery standpoint of it, check out Octavian's entry on 1000fragrances.

Painting Desire by Pino, courtesy of progressiveart.com
*Share with link: Tuesday, May 06, 2008