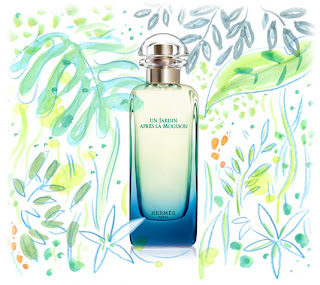 Visiting the Hermès boutique, at which an appointment was made for olfactory appreciation purposes, is a reward in itself. The new summer collection has arrived, in maroquinerie and silk accessories as well as clothes, all in vivid, shocking pinks of India, warm apricots and light greens with themes of elephants and mangoes. And among those the newest fragrance, Un Jardin Après La Mousson (a garden after the monsoon).

This is the latest to join the Jardin trio in the house's more approachable series, which finds itself one regular step behind the grand feminines and masculines and a full rumba step behind the Hermessences. After Un Jardin en Mediteranée, inspired by the Mediterranean and focusing on bittersweet figs and Un Jardin sur le Nil, which focused on green mango (and coming off as grapefruit on a bed of wood shaves), Un Jardin Après La Mousson takes the surprising fruity note of cantaloupe as the thesis for a little summery dance around it, with a sideways wink to Le Parfum de Thérèse in the F.Malle lineup.

Calone, the uber-marine synthetic, is often anathema for myriads of perfume lovers who have declared war on it. Ellena wanted to create a water accord, farther from the usual marine note: I admit I am among the legion who hate Calone and am wondering why it seems like it sneaked its way into a composition that is proclaiming itself a vegetal-spicy. Regarding the latter part, pepper is the protagonist among the spices with its short-wave of coolness, reminiscent of the accord created for Poivre Samarkand. Vetiver in turn disrobes of its earthy, pungent character in a molecular reconstruction by Ellena which sheds the layers of dirty to leave behind a proper and "clean" note that is more like a fabric softener or a good after-shave cream than the viscous essential oil. There is the vegetal theme explored in Kelly Calèche and the mineral aspect of Terre d'Hermès, which combined might appear as laziness, but I suspect is Ellena's way of showing conviction and homogeneity in what he does for the brand.

In the article titled Liquid Assets by Phoebe Eaton for The New York Times, choke full of beautiful pictures, the journey of Jean Claude Ellena to Kerala, India (the cornerstone in the spice market) in a quest for inspiration is recounted for our benefit. Staying at the Kumarakom Lake Resort on the shores of Vembanad Lake in February, Ellena profited from a sojourn in the tropics. And it would be wicked to suggest he goes for such ideas for the chance to do so.

Observation: Jean Claude, despite his identity card and citizenship, doesn't look French. He doesn't dress French. More importantly he doesn't compose perfumes in the French tradition. Instead, he looks Italian (which he is in part) or Greek (which I'd like to think he is judging by his name) and his whole outlook on life and art seems focused in the sparsity and translucence of style that is embedded in the classical tradition of those two cultures. He accepts ornamentation when it serves functionality or innovation, but not otherwise. Like an architect who shuns Caryatids when they don't actually support something or a couturier who abhors brooches which don't hold a dress in place.

He also seems to compose for the particular micro-climate of those two countries, as the rising temperatures of late spring and summer are especially simpatico to the cooling feel of his Jardins, but also Hermessences series. Those scents act as portable air-conditioning around a person, giving an effect of dry cool without the fizzy banalité of sodas perpetuated by the pink fruity florals on the market. I predict his latest offering will sell well in warmer countries which are however removed from the tradition of opulence.

To judge his latest offering we should question ourselves:
Is he loyal to his vision? He assuredly is. He is honing his style, stretching it to its maximum extremities, trying to ascertain that upon sniffing people will exclaim "Mais, c'est un Ellena!" the way they would do it for a Picasso or a Pollock. And incidentally always subtracting, just as they did. He goes for abstraction, not realism.
Is he faithful to Kerala, India? Not particularly, and maybe the fact that the fragrance got promoted in that way leaves something to be desired in the perfume-lover's stakes, much like the leather tag did for Kelly Caleche. It's usually unthinkable to do India without copious amounts of spice and orientalised compositions, although Patou with his Sira des Indes went for the novel approach succesfully with his banana-laced fruity a while ago. 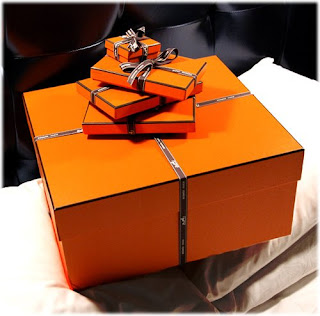 Is he loyal to the Hermès style? This is the trickiest question of the three. Hermès has gone through a dramatic shift in image by hiring Ellena. The older fragrances exuded a luxurious feel of an upscale, very expensive boutique for the elite with the inclusion of precious materials and the honeyed scents of perceived affluence. That image was luxe but also a tad stuffy, prim, too bon chic bon genre and thus ultimately a cliché. The new direction of luxury demands airier scents, ingredients that look humble but perform on a higher level than their constituents (a reconstructed "clean" vetiver for Mousson, a mineral accord for brilliant Terre d'Hermès, a floral-smelling suede note for Kelly Calèche) which, like the recent trend in gastronomy that put back humble rocket on our tables after what seemed like decades, dubs you as not trying too hard. And proper chic, the chic that Hermès is obviously aiming at, is never trying too hard.

In those terms, Un Jardin Après la Mousson is succesful for what it set out to do. Whether it would be my first choice for personal fragrance is seriously debatable. Un Jardin sur le Nil proved to be so lovable and so suited to my summer sensibilities that I am not considering to replace it with the new one. I don't see a void in my collection, to be honest. But I wouldn't resort to aphorisms either!

The fragrance is completely unisex and marketed as such. It performs much better on skin than on the mouillette (blotter) where it loses much of its piquancy. It is rather fleeting however, in comparison to the other Jardins who hold their own well, and might stay put longer if you spray fabric, on which it also performs well.
The complimentary body products (body mist without alcohol: 42euros for 100ml, body lotion: 39euros for 200ml, shower gel: 33euros for 200ml ~and the two limited edition products dry oil: 40euros for 100ml and body mist without alcohol: 42euros for 100ml) are luxurious, though less scented than the Eau de toilette. The latter is presented in a gorgeous bottle which has a degradé of shades from the cap down, from light green to vivid blue and the box illustrations are simply adorable.

Available at the Hermès Boutique US and France, the physical Hermès boutiques, at Saks and soon in department stores worldwide.
Eau de toilette: 83 euros for 100ml

And if you have a few minutes to spare in fun, click here.

Pic via Hermes, boxes courtesy of the Purseblog.com
*Share with link: Thursday, May 22, 2008