Lament for a Fragrance in Sepia ~Cabochard by Gres: fragrance review 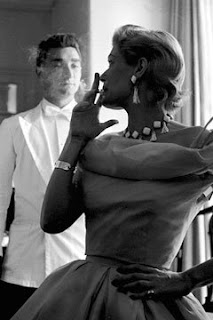 “Headstrong” or “stubborn” is not the first thing that comes to mind when I contemplate on my mother’s personality. Yet it was the formidable, petulant perfume thus named, Cabochard, that had won her heart and ~along with Dioressence~ became her insignia. The Grecian-inspired fluted designs of Madame Grès which were cut directly on the body would have suited the Dorian drama of her beauty. Her dreamy flair for romanticism however betrayed appearences and made a fascinating juxtaposition with her bombshell fragrances. Thus the merest whiff out of her now almost empty bottle never fails to bring back poignant memories of my childhood with a Proustian rush. Talking about it dews my eyes like writing the obituary on an era: trying to recapture those sepia memories like a faded vignette is doomed to fail due to the fragrance being irrecovably changed.

Cabochard comes from the old French word “caboche”, meaning "headstrong" or "self-willed", according to the Petit Robert dictionary. It was Alix Grès, neé Germaine Emilie Krebs and formally trained as a sculptress, who opted for it, to accompany the independent nature of her couture. Alix Barton was her first business pseydonum. But she later took her husband’s ~Serge Czerefkov, a Russian painter ~ first name and with a partial anagram settled on Grès, opening la maison Grès in 1942, amidst the German occupation of Paris. Soon she was dressing everyone, from the Dutchess of Windsor to Marlen Dietrich and Greta Garbo.

The story of creating Cabochard
The credit into making Cabochard a success is attributed to Guy Leyssène, who met Madame Grès at a dinner part two years prior to the perfume’s launch, per Michael Edwards. It was Guy's suggestion that she should issue one because it was a profitable enterprise which all the other fashion designers of the times had embarked on. It took only a month for Grès to ask him to help her create her own perfume. {interestingly, according to history of fashion.com the first perfume was called Muse in 1946}. However, nothing is as simple as it might look. "Cabochard is a miracle of complexity […] the secret life of a Parisian woman with no age and no illusions" wrote Luca Turin about its scent in 1994 and its story is just as complex.

The perfume that was in works was a composition by legendary perfumer Guy Robert, called Chouda. Robert was young and under the guidance of mentor Andrée Castanié, then editor of L'Officiel de la Mode et de la Couture, had been introduced to Mme Grès in 1956. But it took a trip to India, the land of exoticism, which prompted Alix Grès to further her plans on the house’s fragrance. The visit had begun innocuously, invited by the Ford Foundation to assess Indian brocades. It was there that Alix Grès discovered water hyacinth: a flower she became enraptured with. It has a sweet odour, rich like tuberose, yet with a fresher top and slightly warmer. The experimentation of Guy Robert yeilded rich fruits: Alix loved it, however Chouda was almost exclusively used by her (only five litres of Chouda were ever made) as it was too flowery for the tastes of the 50s which veered towards classic chypres. She launched another fragrance under the pressure of public input: the mod of what was to become Cabochard, made by Bernand Chant of IFF, was received much more favourably and thus the plan to push Chouda was ultimately abandoned, although the two were issued almost simultaneously in 1959. It comes as a surprise that there were focus groups even back then, but it is a fact that puts things into perspective: public reception is (and will always be) the moniker of how things work in a sector that, although hinges on art, is also largely a business. 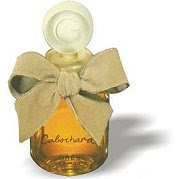 The story of the bottle for Cabochard, as well as Chouda, is also extraordinary in that it was the already made and discarded stock of Guighard, a small glass manufacturer later acquired by Pochet. They had made the bottles for another company who never bought them and in order to save costs, Grès bought all 500 of them for both perfumes. The difference was the little bow that adorned the pharmaceutical stopper: grey for Cabochard, green for Chouda. The Cabochard success (it sold 250 bottles in the first week of its launch alone!) secured numerous backorders to the glass manufacturer. In a way, the commercial success owed to the enthusiasm with which it was promoted by a commission salesman formerly working for Piguet (whose biggest seller at the time was Bandit). According to Leyssène the demand was so pressing the sales were doubled each year for the following ten years!

Scent Considerations: A Leathery Chypre Marvel
Cabochard utilised the same aromachemical with Bandit: isobutyl quinoline, a harsh green and pungent, dry leather aroma, yet fanning expensive, precious, sweet flowers over it. Inspired by the archetype it muted the smokiness until the drydown. Cabochard offers a capricious bitter orange opening instead, with the illusion of wading through wild bracken catching a distant whiff of clove and hairspray. The crackling leather, powdery afterfeel of face cosmetics was sustained for hours on skin, emitting grace and confidence in a similar manner to Chanel’s Cuir de Russie, although with rather more sweetness and less birch. To Gres it recalled a walk along a deserted Indian beach:


“the crispness of the early morning air, the warmth of sandalwood, a hint of far-off flowers, and the dry caress of sea breezes”.


The parfum sitting on the dresser of my mother ever since I can remember was so warm and rich than mere drops were enough to scent her hair and garments, retaining the essence of who she was into my heart of hearts. The eau de parfum in older versions is also exceptionally good, while the eau de toilette has a lighter but sharper quality.

The difference between the vintage and the recent re-editions can be traced back to 1984 when Beecham Cosmetics acquired British American Cosmetics, who had bought the Grès brand in the interim after Alix closed the couture house. To celebrate Cabochard's twenty-fifth anniversary, they changed the grey velvet bow into frosted glass, encased the bottle in a black instead of a black-and-white one and brightened the citrus top while also restraining the animalic accord. The 40th anniversary of Cabochard was celebrated in 1999 with a Bacarrat crystal flacon, designed by Serge Mansau and what seems yet another re-formulation which finally put the tombstone on one of the best in my opinion perfumes of the 20th century.