Few perfumes are entangled in such mythos and in such erroneous rumours as Mitsouko by Guerlain. Mysterious, balanced, sumptuous, it's nothing short of a Gordian Knot which demands a swift cutting through its mysteries to arrive at the truth. And truth is not easily provided for this 1919 fragrance which closed the era of WWI and opened up Les Années Folles. 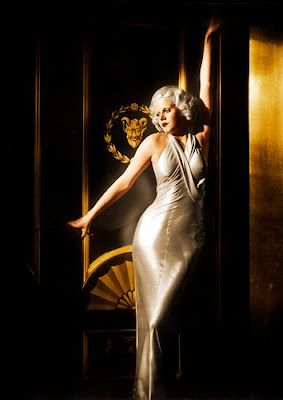 Famous patrons & their fateful stories on Mitsouko
Jean Harlow, the platinum blonde sex-pot of the 1930s who was born on March 3rd 1911, all slinky peignoirs and ice put on the nipples behind those satiny gowns, used Mitsouko in Dinner at Eight; it was her favourite fragrance in real life. Her platinum head was not what the creators at Guerlain had originally thought of: Mitsouko was right from the start destined for brunettes, while L'Heure Bleue was recommended for blondes. She gladly embraced both, much like she let her hairdresser put peroxide, ammonia, Clorox, and Lux Flakes on her naturally darker hair.
Little did Jean know that her first husband Paul Bern would be found dead and drenched in Mitsouko in a astounding case of a suicide just one week after the wedding. Rumours say that it was impotence that drove him to his act of desperation. Jean was put to record saying all three marriages she got into were "marriages of inconvenience". Perhaps the sad story inspiring Mitsouko perfume was a bad omen for her love life as well.

It certainly didn't really bring good luck to other famous patrons, such as the impressario of Les Ballets Russes, Sergei Diaghilev (who drenched his curtains with it) or Charlie Chaplin. In the unexpurgated diary of erotic authoress Anais Nin, Henry and June, Mitsouko features prominently as the perfume that June Miller asks to be given her by Anais. Of course, to follow the truism by Gore Vidal [1], lying had become Nin's first nature, so all bets are off on whether that actually happened: What remains is that Mitsouko was indeed Nin's scent of choice, alongside Narcisse Noir by Caron. Such is the repercussion of the scent in cultural heritage that a pop sensation of the late 1980s, the French duo of Les Rita Mitsouko christened themselves after it! 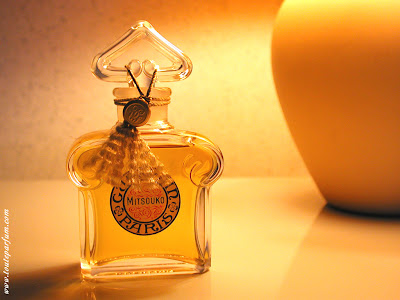 The Legend of the Creation: Myth and Misunderstandings


Lore on the inspiration of Mitsouko wants Jacques Guerlain to have wanted to pay homage to a popular novel of the time, “La Bataille” by Claude Farrère. In it Mitsouko, a beautiful Japanese woman and the wife of Admiral Togo, is secretly in love with a British officer aboard the flagship of the Japanese fleet during the 1905 war between Russia and Japan; Mitsouko awaits with dignity the outcome of the battle, nobly overcoming her feelings. Hence derives the confusion about the spelling of the name: although Mitsuko [sic] is a Japanese word, neither is it spelled Mitsouko nor does it mean "mystery" as the official press of Guerlain would like us to believe. Like other perfume tales, it's just that: a romantic allusion to "zee love storee" that enslaves women's imagination and stirs men's loins. 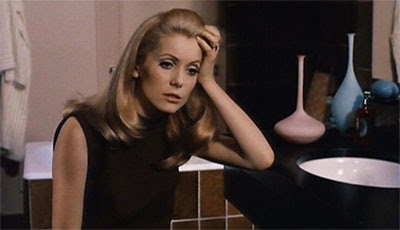 In Louis Bunuel's cult classic Belle de Jour respectable newly-wed doctor's wife, but frigid and masochistic, Catherine Deneuve accidentaly smashes a huge "flacon montre" of Mitsouko in a symbolic scene in her bathroom before setting to spend the afternoon as a prostitute. Would the scene work equally well semiotically with another perfume? Doubtful...

Perfume writer Susan Irvine recounts how one day in Paris she shared a taxi with a woman [wearing Mitsouko] who smelled "the way God intended women to smell: plush, troubling and golden" [2]. And goes on to reveal in a Vogue article that adopting Mitsouko for a year produced no comments whatsoever from anyone, contrary to her compliments galore success with YSL Paris! 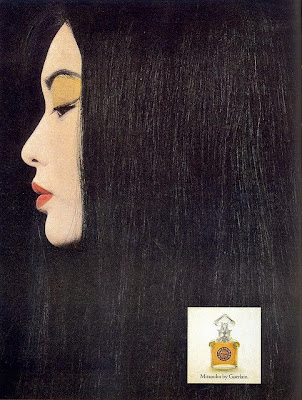 Perhaps what's most interesting about the strange position of Mitsouko in its erotic charge is how it encapsulates two quite different perspectives on how human bodies should or would smell of. The 19th-century Japanese referred to western traders as "batakusai", which roughly translates as "stinks of butter" due to their high dairy consumption which gave their skin a cheesy aspect (isovaleric and butyric compounds do that); while the Brits found the Japanese in turn "fishy", again a reflection on an insular diet. How would the British officer and the beautiful Japanese wife named Mitsouko would have found a middle-ground between their human scents of passion?

Nowadays, Mitsouko is Guerlain's top seller in Japan, in a reverse homage to the brand that ushered Japonism in the mainstream many decades ago. This goes against all received wisdom that the Japanese go for "light" perfume and only rarely ever put it on themselves. One wonders if the cultural milieu of accepting smells that are different than those perceived as pleasurable in the West allows them a higher appreciation of this masterpiece of a scent.

Deconstructing the scent & formula of Mitsouko 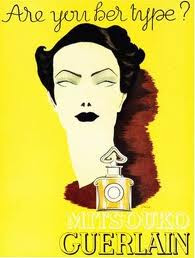 The composition of Mitsouko was revolutionary at the time, even though it updated and -arguably- improved on the seminal formula of F.Coty's Chypre: The innovative peach-skin note perceived at the heart of the Guerlain fragrance derives from a modern synthetic ingredient, aldehyde C14 or gamma undecalactone (Peach essence cannot be naturally extracted). The inclusion of the famous base Persicol ("bases" are ready made smell-chords for perfumers) which included it contributes to the peachy, warm effect. Flanked by murky oakmoss and refreshing bergamot at each end ~thus composing a classic chypre chord~, it adds spicy accents reminiscent of cinnamon and cloves ~especially felt in the Eau de Toilette version which circulated till recently.

Mitsouko also utilizes rose, neroli (a light-smelling orange blossom distillation product), woods, vetiver and patchouli for a short but succinct formula which balances itself between apothecary and pattiserie. The candied orange peel effect mollifies every herbal aspect, while the flowers are so subdued and well-blended as not to be discernible as such; if abstraction is elegance, then Mitsouko is very elegant indeed, without nevertheless losing its sensuality; there's a furry little animal hiding underneath it all, although you can't really place it!

The mysterious, haughty fragrance is in chasm with every recent pop trend, making a difficult love-affair much like its storyline; nevertheless indulging in a bottle of Mitsouko is the hallmark of the true connoisseur, like a fine Pinot Noir wine can be an acquired taste. If you try and do not like it in the end, there is no reason to beat yourself up for it, just because we proclaim it such a beautiful and smart fragrance; but be sure to give it a chance in different times, different weather (it expresses itself wonderfully on rainy days, which bring to the fore its earthy core) and different moods. After all, as The Bombshell Manual of Style declares: “Mitsouko has more sensuous layers to unpeel than Rita Hayworth dancing the Dance of the Seven Veils as Salome." 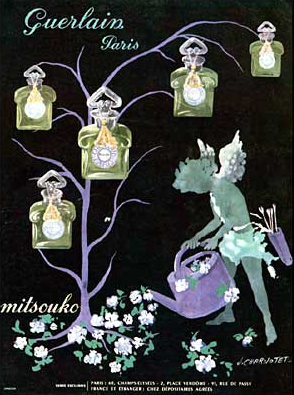 Different concentrations and different vintages produce different effects. Vintage parfum extrait is so rich and luscious as to render experiencing Mitsouko a rare occasion of olfactory satiation. The oakmoss galore of as recent crops as Eau de Toilette and Parfum de Toilette from the 1980s and early 1990s is exquisite in its unsettling, deeply mossy ambience. The modern Eau de Parfum version reworked by Edward Flechier (this happened in early 2007 due to oakmoss restrictions imposed by European Union legislature, with Eau de Toilette being the first to reformulate) is the best rendition closer to the original idea, while the current Eau de Toilette seems thinned and yielding a bread, yeasty note which I personally feel is incongruent with the image which I have in my head of it. 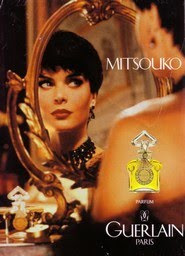 The classic bottle design, called “inverted heart” because of its cap, reprises the design of another Guerlain classic L’Heure Bleue which was issued in 1912, due to the shortages of World War I [3]. It's the golden standard on which both Eau de Toilette and Eau de Parfum still circulate to this day. After the success of Mitsouko, the design stayed, as a gentle stylistic reminder of the two bottles opening and closing the period between the beginning and the end of the war. And indeed if L’Heure Bleue is contemplative daydreaming and above all romantic like La Belle Epoque, Mitsouko is mysterious and emancipated heralding the era of flappers like no other perfume.

Other presentations include the flacons quatrilobe, amphora/rosebud and umbrella bottle (for the extrait de parfum) and the montres (cyclical bottles with a gold pyramidal cap) for the very lasting and robust vintage eau de cologne concentration circulating throughout the 50s, 60s and 70s with the mint green, round label.
A limited edition flanker called Mitsouko Fleur de Lotus circulated a couple of seasons ago (you can read our review on it on the link).