Ambrox/Ambroxan: a Modern Fascination on an Elegant Material

When a new raw material enters the perfumery scene only the involved few are cognisant of the fact. When this raw material however takes the role of manna from heaven in times of crisis, however (see how synthetically-derived irones for substituting orris butter produced "the year of the iris" and how synth aoud made 2009 the year of "oud") companies invest it with panegyrics extoling its qualities. The latest material to do that is Ambrox and if you thought you haven't smelled it before think again: Almost everyone has a rather good scent memory of it through the ubiquitousness of Light Blue by Dolce & Gabbana, composed by Olivier Cresp in 2001, to name but one of the scents which use this raw material in ample amounts. In synergy with other two synthetics, Z11 and Norlimbanol, Ambrox gives Light Blue that non-perfume smooth base which made it so very popular and instantly recognisable on commuters and elevator partners across the globe. 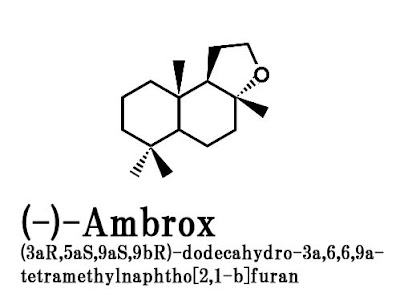 As is usual on Perfume Shrine when dissecting perfumery materials (this is the list with the posts on them) we revert to a little Chemistry 101 to explain Ambrox and its smell in detail. The chemical formula for Ambrox is C16 H28 O. Ambrox was therefore born through organic chemistry in the 1950s at the laboratories of aroma-chemical producing firm Firmenich SA as a substitute for ambergris (grey amber) which was very expensive for wide use in fragrances and exceedingly scarce. (You can read more on ambergris and its commonalities/differences with the term amber on this article). Although used interchangeably with Ambroxan as they share almost identical odour profile, they are not one and the same. The construction of Ambrox follows the route of sclareol, a product of the process of clary sage, a natural essence known to aromatherapists for many years [source]. Nevertheless another path exists for Ambrox synthesis, this time from labdanoic acid, since 2002. The main diterpenoid of the acid fraction of non-polar extracts of Cistus ladaniferus L.) converts using an organoselenium reagent, is then oxidatively degradated in its side chain, and finally cyclization of the resulting tetranorlabdan-8α,12-diol happens. Thus, Ambrox is obtained by a six-step procedure in 33% overall yield from methyl labdanolate. [source] Other paths include synthesis from (E) Nerolidol and β-ionone, as well as through (+) -carvone and thujone. [source]

Ambrox is typically used as one of the base notes of perfume compositions, due to its extremely lasting velvety effect which oscillates between an impression of ambergris (salty, smooth, skin-like), creamy musky & labdanum-like (read on labdanum on this link) and with "clean"/blond woody facets in the mix too. In short, a fascinating molecule that presents itself as a prism through which different facets can shine. Its reception is undoubtedly one of positive response: You're hit with something that smells warm, oddly mineral and sweetly inviting, yet it doesn't exactly smell like a perfumery or even culinary material. It's perfectly abstract, approximating a person's aura rather than a specific component, much like some of the more sophisticated musk components do. Fittingly, Ambrox solves some of the shortcomings of the latest IFRA restrictions on several musks and animal-like base notes. No wonder it's been used so much in perfumes in the last couple of decades! Although one might argue that synthetics replicate naturals due to increasing constrictions on formula costs on the part of perfume companies, the truth is Ambrox is relatively costly in the mostly inexpensive world of synthetics. However until recently companies were reticent into mentioning its inclusion in a perfume formula. It took the pioneering guts of Geza Schoen and his niche brand Escentric Molecules to elevate chemistry into the realm of bottling single molecules in bottles to be put on one's vanity or bathroom shelf: Molecule 02, solely an Ambroxan dilution was coupled with Molecule 01 fed on only Iso-E Super (details on that material on this link).
Recently companies however took on a different path, actually boasting on their flamboyant, mono-chromatic use of this popular material, thus making ultra-hip Parisian concept-store Colette’s newsletter talk about "fragrances fed on Ambrox"! 2010 might well be the year of Ambrox as apart from Juliette has a Gun who boasts on their sole use of Ambrox diluted in ethanol for their Not a Perfume, other companies bravely declare the emphasis on this synthetic: Another 13, from the New York based brand Le Labo and M Mink by Byredo. The latter fragrance uses Ambrox alongside chypry, aromatic and animalic tonalities which are reminiscent of ink.
Whatever you might think of it, we haven't seen the last of Ambrox yet!

List of Perfumes containing perceptible Ambrox/Ambroxan at the base
(Listed in diminishing order of perceptability. NB. The highlighted links lead to reviews/more info):


Please note that another name for Ambroxan is Orcanox, such as mentioned in Etat Libre d'Orange Malaise of the 1970s.