Two new fragrances are getting issued from French-based brand extraordinaire Etat Libre d'Orange this coming autumn 2010. News had leaked at the beginning of the year, but now it is officially confirmed. And the first of them demands its own dissection since it hinges on several cultural axes and one relating the political with the "scentsical"; always within the scope of Perfume Shrine.

Le Parfum Sex Pistols, the brainchild of Etienne De Swardt, the owner of the infamous niche brand is "the scent of anarchy and rebellion worn to bring out your inner punk". Etat Libre d'Orange despite their French roots seems hell-bent on bringing out the most influential of the British: what with their collaboration with Tilda Swinton for Like This recently and now with the Sex Pistols, the revolutionary punk-rock band of the late 1970s whose motto was "We are not into music, we are into CHAOS". All too brief (just 2,5 years of presence and one LP album) and they're still being discussed, nevertheless. Not least because of the legend of "doomed youth" of its tragic man Sid Vicious (his name ironically taken off Johnny Rotten's pet hamster), dead at 21 after a heroine overdose following the accusations of doing his girlfriend in while on a drug-induced high.

The coincidental timing wanted the new fragrance to be scheduled right after impresario Malcom McLaren's death, the man who proclaimed he "used people like clay, like a sculptor would" in order to make the Sex Pistols, initially a subcultural manifestation aided by his lover fashion designer Vivienne Westwood, his very own anti-establishment art project, taking full credit years after the band's splitting for creating the social and cultural phenomenon. To wit, watch the Great Rock n'Roll Swindle. Yet critic Greil Marcus reflected on McLaren's contradictory posture: "It may be that in the mind of their self-celebrated Svengali...the Sex Pistols were never meant to be more than a nine-month wonder, a cheap vehicle for some fast money, a few laughs, a touch of the old épater la bourgeoisie. It may also be that in the mind of their chief terrorist and propagandist, anarchist veteran...and Situational artist McLaren, the Sex Pistols were meant to be a force that would set the world on its ear...and finally unite music and politics. The Sex Pistols were all of these things" [quoted: Hatch, David, and Stephen Millward, From Blues to Rock, p. 170]. Of course the underlying chasm between McLaren and charismatic (and intelligent) Johny Lydon -or "Rotten" as he was widely known "thanks" to his early-70s-British-teeth; the lads sport pearly whites now- makes the auteur's ambition on McLaren's part rather ambiguous. The political agenda was inchoate, the effectuation of change not really solid in anyone's mind, the identification with the working classes not really there [Campbell, Sean, "Sounding Out the Margins", pp. 127–130.] 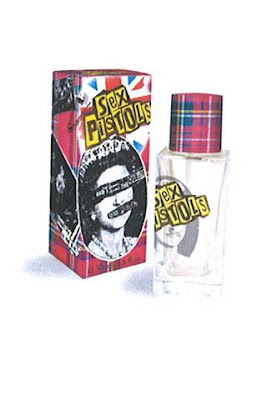 If it had been any other perfume brand, I would have talked about spoliation... Yet something about Etat Libre makes the most unlikely projects seem acceptable! After all they did a scent after homoerotic sex artist Tom of Findland. And another one called Fat Electrician, sporting the (predictable) dawn of a butt-crack on the advertising images. McLaren himself had stated "[Punk's] authenticity stands out against the karaoke ersatz culture of today, where everything and everyone is for sale.... [P]unk is not, and never was, for sale." Then again, there is a lot of "watering the wine" with the passing of years, as even the mouthpiece of the band capitulated to commercialization. All right, it was to fund the reunion of his PiL group because Virgin Records (who had the Pistols signed) refused to sign them, but still...it looks incongruent. And nowadays when the international economic crisis is sending off people into their own little conservative cocoon, how does a conceptual project materialize in a product?

Also related is that De Swardt has "set up a new company, Editions des Sens, to create fragrances which are a little less niche and have a slightly wider market appeal". [source] A reverse concept of "editions" for a wider audience rather than more limited, the way it was back when Malle introduced his own. It's interesting to contemplate in the greater scheme of things.
The unisex juice for Le Parfum Sex Pistols by Etat Libre D'Orange was created by Mathilde Bijaoui from Mane and opens with lemon, grey pepper and ambrette notes. The heart has black plum, aldehydes and heliotrope, drying down to patchouli, orcanox and leather at the base. Luckily not the vomit note of warm beer consumed in punk concerts...we've been spared.
Anyway, the perfume hits international stores in September. Never mind the rest, here comes Le Parfum Sex Pistols!
*Share with link: Wednesday, July 07, 2010