Many summers ago I used to spend my days by the sea at my grandparents' villa, surrounded by majestic pines as old as the original tenants, numerous dusty fig-trees and one wild-pear tree which was later struck by lightning to ash. The wind was sighing in the boughs, a nightingale came to sit on my shoulder and the longings of those long summers promised adventures as yet uncharted, our psyche elevated through a taste of awe. The long pine needles were falling in heaps on the floor of this pine grove ~infuriating my grandfather who had to work doubly hard along with the gardener to keep the grass properly breathing~ counterpointing the mighty trunks, often bleeding tears of golden sticky resin used in both turpentine and retsina. This was different from the mastic and copal resins, which we grounded in fine dust, or the rosin, which I witnessed being used by the student of violin who routinely accompanied me at the piano at the Conservatoire. We were sent as children to gather fresh pine needles, run them through the cold water of the outdoors tap, gather them in bunches and hang them upside-down to dry: they would be stored to make herbal tea with honey to ward off colds, a tip of our German cleaning woman, when the summer villa would revert to its silent existence for half a year. Everything about those precious memories was conjured as soon as I heard of the newest Serge Lutens fragrance, Fille en Aiguilles and the reality of it didn't betray my visuals as some of you will find out for yourselves (yes, there's a draw for samples coming up, keep reading!) 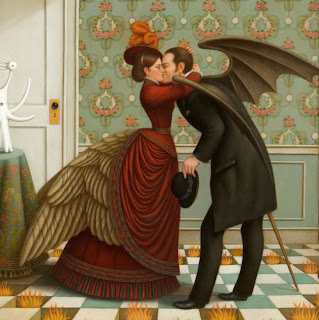 The first announcement containing the notes had been the instigation, the second round of news with the cryptic messages by Serge had been the icing, as it left us with exactly nothing to go on upon ~the mystery was well preserved: this girl ~or boy, who could wear this equally well~ rolling on pincushions was not telling any tales just yet. The aiguilles part (“needles”) in the name has been linked to sewing needles (due to the French idiom "de fil en aiguille" meaning from needle to thread, from one thing to another, ie. snowballing), or stiletto heels ("talons aiguilles" in French) perhaps exactly because there was the "tick tick tick" repetitive sound in the press release. Still pine needles, those long thin lances that strew forest floors and exude their resinous, medicinal-sweet smell when the air is warm, are at the core of the composition rather than the ill-sitting, detergent-like tones of so much "pine"-baptized air pollution posing as home and car ambience.

In a nod to old empirics and apothecaries, who healed ills attributed by the superstitious ailing to supernatual forces or the wrath of God through folkore herb medicine and mysticism, uncle Serge acts as a shaman, letting out blood with his pine needle in his bag of seemingly endless tricks. In Alain Corbin's book "The Fragrant and the Foul" the theory of miasma is documented: the widespread belief that foul smells accounted for disease and therefore eradicating the bad smells would result in battling the disease (Incidentally there was also the widespread belief of bathing disrupting the protective mantle of the skin, but this is the focus of another of our articles). The practice has long ancentrastal ties to ritualistic cleansing via sulphur as depicted in antiquity, remnants of which are referenced here and there in Greek tragedy such as Euripides's Helen. Fire and brimstone led by a savant Theonoi goes far, far back...In the Middle-Ages during bouts of cholera, the plague and other miasmata, empirical healers used a large hollow beak stuffed with cleaning herbs so as to protect themselves, earning them the descriptor of "quack", which by association became synonymous with charlatan later on when the science of medicine prevailed. The word is of Dutch origin (kwakzalver, meaning boaster who applies a salve); boaster because quacks sold their folk medicine merchandise shouting in the streets.The belief in the magical properties of scented compounds runs through the fabric of fragrance history: let's cast our minds back to the alleged cure-all of Eau de Cologne by Johann Maria Farina and his imitators! But is perfume really snake-oil? Only to the extend which we allow it to be, yet there lies artfulness in the pharmacopoeia.

This particular catharctic blood-letting preceding the herbal ointment, forms a trickling kaleidoscope of the elements which Lutens has accustomed us to, via the sleight of hand of perfumer Christopher Sheldrake: There is the candied mandarin peel with its strange appeal of cleaner (La Myrrhe) and putrid aspects (Mandarine Mandarin), the fruits confits of his Bois et Fruits, the interplay of cool and hot of the masterful Tubéreuse Criminelle, the charred incense depths and fireworks of Serge Noire, the vetiver in Vétiver Oriental with a rough aspect peeking through and even some of the spice mix of El Attarine, appearing half poised between cumin and fenugreek. After the last, pretty and atypical for Lutens Nuit de Cellophane, Fille en Aiguilles is an amalgam of strange accords, a disaccord within itself, but with a compelling appeal that pleases me. Contrasting application techniques ~dabbing versus spraying~ I would venture that should you want the more camphoraceous elements to surface, spraying is recommended; while dabbing unleashes the more orientalised aspects. There is sweetness in the sense that there is sweetness in Chergui or Douce Amere, so don't let it scare you too much. The liquid in my bottle is wonderfully dark brown, somber yet incadecent in the light of the day and as dark as ink, much like Sarrasins, in the dusk of the evening (and be warned that it also stains fabric almost as much).

Serge Lutens Fille en Aiguilles has notes of vetiver, incense, fruits, pine needles and spices in a luminous woody oriental formula.
Available in the oblong export bottles of 50 ml/1.7oz of Eau de Parfum Haute Concentration for 95 € /140$ at Paris Sephora and of course Le Palais Royal and later on at Selfridges UK, Aedes US, the Bay in Toronto and online.

For our readers, enter a comment to win one of the five samples given of the new fragrance well ahead of its wider distribution!