Romano Ricci, progeny of the well-known Nina Ricci family, is responsible for the playful and whimsical Juliette has a Gun fragrances which include Citizen Queen, Lady Vengeance, and Miss Charming. Right after introducing "Bullet", literally a bullet-shaped atomiser for his fragrances, there is a new masculine proposition this time: Calamity J. named after the notorious Calamity Jane of the West or perhaps hinting at the Juliette of the eponymous brand. 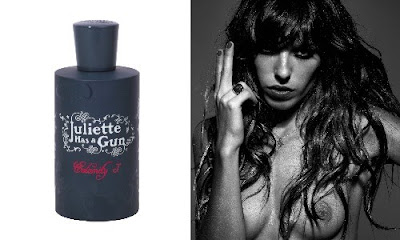 Although marketed as a masculine, the new fragrance is aimed at rebellious women, much like the Wild West heroine, and is centered around a 35% concentration of musk cocktail. Romano Ricci wanted it to recall the essence of a dandy, with an aura that couldn't be characterised neither floral, nor fruity, nor citric, opting for a woody-ambery nuance that is supported by patchouli, amber, iris and musks.

The face to front such a fragrance is Lou Doillon, the sister of Charlotte Gainsbourg (who will be fronting the new Balecianga fragrance as discussed recently) and daughter of Jane Birkin, muse of L'air de Rien perfume by Miller Harris. Her athletic, dynamic but still unconventional physique posed in the nude was considered very fitting the rebellious concept of the series. Romano liked the idea and the "it-ness" of Lou so much he is seriously considering of making her his official "face" of the entire line.
The fragrance is set to launch this November internationally and will be presented in a roll-on version in 2010. Prices for Juliette Has a Gun Calamity J. will be 75 euros for 50ml/1.7oz Eau de Parfum and 98 euros for 100ml/3.4oz.