Nahéma...The sonorous name comes from the 1001 Nights, in a story by Scheherazade recounted on the one and only day of her storytelling. Scheherazade is also the name of a symphonic suite by Rimsky Korsakov, worth exploring; nevertheless the effect of Nahéma more closely resembles the climactic experience of Ravel's Bolero. The Arabian story involved the fate of two abducted princesses: one warm and compassionate, the other called Nahéma, meaning “daughter of fire” of a passionate disposition. No one on the various boards actively bothers to find out the name of the other one, but here at Perfume Shrine we like to question the unquestioned and support the underdog. Mahané was the name of the other princess, then. So now you know, in case you wondered! 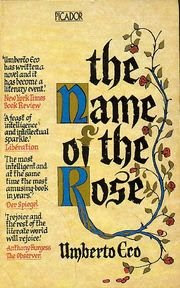 Created in 1979 with Catherine Deneuve in mind by Jean Paul Guerlain who had been fascinated by her in the film "Benjamin", Nahéma follows the fiery character of the fictional heroine who was ruled by passion and the imagery of Deneuve in a gold cage surrounded by roses (as depicted in the film) aiming to express the duality of woman. Although La Deneuve has been tied with Chanel #5 to the collective unconscious, largely due to the hyper successful campaign (that aimed to the American market though and not France), she proclaims to be deeply into all things Guerlain naming her signature scent as L’Heure Bleue. However she is a regular perfume collector too and has an extensive collection indeed that can be viewed on my Celebrities and the Perfumes they Wear list. This comes as no surprise and definitely justifies my opinion that Nahéma doesn’t really suit Deneuve’s icy exterior, which forms however a significant part of her appeal. On the other hand there are other devotees of Nahéma who love it with a passion: “I feel completely unlike myself if I don’t wear Nahéma. It’s a strange scent, but I love it, and I confess it’s a luxury I can barely live without.” Thus waxes poetically about it Shirley Manson of Garbage rock-group-fame.

However Nahéma didn’t do very well, sales-wise ,and thus is not so easy to find at Guerlain counters, but of course it is not extremely rare either. Its being a commercial flop might be attributed to the fact that it was ahead of its time, introducing the fruity floral concept 20 years before its heyday. It came out at a time when light streamlined chypres like Charlie had already established the image of the independent woman and the new thing were the spicy, mysterious orientals that followed the success of Opium. Nahéma was neither. 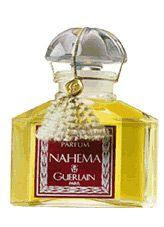 On the contrary, Nahéma is a very feisty affair of honeyed rose backed up with intense fruity and balsamic notes such as passion fruit and benzoin, respectively. The initial start has the intense blast of aldehydes redolent of a classic French perfume, so giving it a little time before judging is strongly advised. The heart also encompasses ylang-ylang, jasmine and lily of the valley, as well as an accent of sweet hyacinth (the most characteristic blossom of Chamade): notes which take the supporting role of subtly underscoring the rose. To my nose however the real mate for the rose is peach and plummy nuances: rich and juicy and sunnier than either the note of peach skin in Mitsouko (undecalactone gamma) or Parure, here rendered by the use of lush damascones, at the time just recently discovered (damascones are natural isolates from the rose, giving rose its very rosiness). The rose-fruits combination as well as the richness of damascenones have been reprised by Sophia Grojsman, notably in Trésor in the early 90’s rendering it an instant best seller. In that case nevertheless it’s much more powdery, sweeter, overwhelming and heavy-handed in my opinion. The moderately powdery, liquor-like rose bouquet in Nahema allegedly comes from no less than five elements: Rose de Mai (Grasse or Centifolia rose)absolute and essential oil, Bulgarian rose (Rosa Damascena) absolute and essential oil and the above mentioned damascenones. However other sources, such as Luca Turin, proclaim "the rose at Nahéma's core [...] a geometric locus bounded by a dozen facets, each due to a different ingredient" making it "too rich even for analytical chemistry to make sense of" (By which I deduce he hasn't had the privilege of running this through a gas chromatograph and mass spectometer).
A little while into the drydown of Nahéma clearly detectable sandalwood, Peru balsam and that prerequisite of orientalia, so beloved by Guerlain, vanilla, make their appearance. Guerlain vanilla is unlike anything else out there – it positively smolders. Deep, rich, completely alien to the concept of teenagers seeking a low-calorie substitute to their Haagen Dazs ice cream, it manages to ignite interest even in people who do not normally appreciate vanillic scents. Suffice to say this is not for those who like lighter or “clean” scents, although I do not detect particularly naughty or indolic notes.
The Nahema parfum in the squat bottle with the quadrilobe stopper (same as Jicky, but with a red label) is rosier and smoother, as usual with Guerlain fragrances, as well as to a lesser degree is the 80s concentration of Parfum de toilette and the more recent Eau de Parfum. Yet the Eau de toilette is not unpleasant either, although the initial opening might seem completely aggressive and thin in comparison. Compared with the retro-chic and light-heartedness of Guerlain's Rose Barbare , Nahema is fiery, voluminous and single-minded to the point of stubborness but generous and expansive.

The advertising makes use of the fiery heroine, always depicting women clad in orientalised robes of red and flames shaped like a wreath surrounding the bottle.In my mind Nahéma can be polarizing, making people react viscerally to it. To my detriment, I am not truly enamored with it, mainly because I am no great lover of roses or peach or passionfruit, so another bottle of it is not in my future, however I can’t fail to appreciate the audacity and pedigree of the composition and keeping a small quantity at my side is a lesson in letting the genie out of the bottle.


A small sample of Nahéma parfum will be given to one lucky reader. State your interest!

Pic of
The name of the Rose mock-manuscript via Wikimedia Commons. Bottle pic through Fragrantica. Clip of the 2nd part of Ravel's Bolero to a choreography of Maurice Bejart, originally uploaded by audiodeluxe on Youtube.
*Share with link: Monday, December 15, 2008