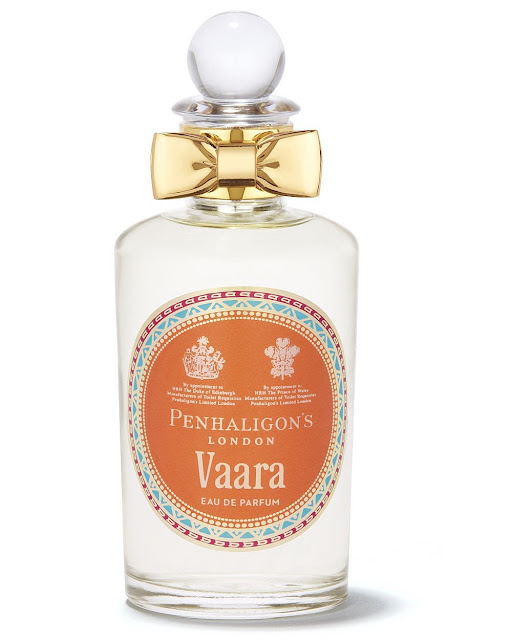 Duchaufour, like Jean Claude Ellena, moves his accords and ideas around, exploring them, revisiting, pushing them to their natural and unnatural limits all the time; on one level, the hallmark of a true artist. Whereas Ellena has the luxury of doing it within the context of one company, since his in-house tenure at Hermès, Duchaufour seems at the flummox of some orgasmic productivity; to map out the sheer volume of the man's creations in the last 5 years alone would take a considerable effort worthy of an ultra-conscientious librarian. And whereas some of them are questionable in their repercussions, the end result is usually what we perfume aficionados refer to -favorably- as a "transparent oriental perfume", namely a composition that can't be faulted for being too thick or dense to be wearable under the most casual of moods, nor the most refined of occasions.

Vaara by Penhaligon's is one such thing, a very deftly aerated meringue of a scent, uniting a lightly gourmand scent impression with rose, like a loukoum nugget. A moutwatering effect which has prompted originaldeftdom on Fragrantica to liken Duchaufour to Heston Blumenthal. Of course Duchaufour is no stranger to this alliance of true minds: rose and saffron is a classic Middle-Eastern and Indian combination (rose is making a comeback as a perfume note of late anyway) and the well-known perfumer has explored the lightly suede/leather-smelling facets of the precious stamens when used with rose in both Traversée du Bosphore for L'Artisan Parfumeur as well as in Mohur by Neela Vermeire Creations previously. (It is important to note that this is an interpretation far removed from the mossy-chypre and more aggressive Agent Provocateur eau de parfum which also explores the accord of saffron & rose).
Indeed many of the official notes are, if not the same, then quite close in all three compositions by the sleight-handed Bertrand (for instance the carrot seed note, referenced in Mohur too reflects the iris, ambrette is a kind of musk, the edible, lightly fruity çay note from Traversée gets a quince jelly treatment here, quince being close to apple and so on...). At least the geographical direction points the compass consistently to the East; near or far, it doesn't matter much to the Parisian and the Londoner who flock to buy Duchaufour's creations. Of course the press release goes on and on about the travels that Duchaufour has gone to, to get inspired by India in all its glory. (At this rate, he must know the area like the palm of his hand by now!)


The name Vaara means both "blessing" and "breeze" and stands for the granddaughter of His Highness Maharaja Gaj Singh II; the perfume was commissioned to celebrate her birth and the family’s love for the city of Jodhpur and was inspired by the Royal House of Marwar-Jodhpur in Rajasthan, India. For the launch, earlier in July, the Penhaligon's boutique in London was filled with images of Jodpur to mirror the chronology of the journey, the fragrance profiling room turned into a Rajasthani spice market with drawings from perfumer Bertrand Duchaufour’s notebook, photos taken at the market and the raw ingredients of Vaara.

The quince and coriander are the dominant allies to the rose-saffron accord in Penhaligion's Vaara scent and enhance it without drowning it. The lightly sweetish message after the top note has dissipated, warm and skin-scent-like is quite delicious with no screech from the flower notes (peony and freesia, two synthetically recreated "notes" are often a culprit).

Vaara despite the repetition of themes and the cliché exotic promo isn't just bon pour l'Orient. It's bon, period.

For our readers, I have a generous and sleek travel atomiser of Penhaligon's Vaara for one lucky winner. Draw is open internationally till Friday 27th midnight. Winner to be announced in the weekend. Enter a comment to be eligible.

In the interests of disclosure, I was sent the sample for reviewing purposes by the company.