“Just because I’m resisting the wine doesn’t mean I can’t appreciate the bouquet,” he whispered. “You have a very floral smell, like lavender … or freesia,” he noted. “It’s mouthwatering.” We can forgive Edward Cullen wooing Bella in Stephenie Meyer's vampire hit Twilight the semi-true reference of lavender as floral (it's really an aromatic in perfume-speak); the matter of the fact is that freesia is mouthwatering indeed and Edward is a major heart-throb for teenage audiences (there's even an online test about how you smell to Edward Cullen). 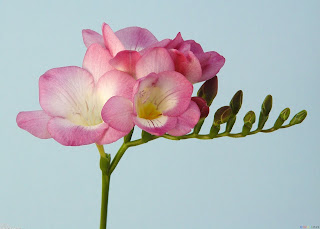 In Meet Joe Black freesia is a symbol of the hidden sensitivity of the aging father about to meet his death, played by Anthony Hopkins:
- We do need some answers on the flowers.
- Ah, yes, freesia, freesia. Everywhere freesia. Daddy loves freesia.

Not so for sophisticated and rather cynical Miranda Priesley in The Devil Wears Prada, quoted: "If I see freesias anywhere, I will be very disappointed"...

But it is Hugh De Sélincourt in The Way Things Happen who highlights the unique heart-aching aspects of this vividly huedblossom" "The happiness of that afternoon was already fixed in her mind, and always would the scent of freesia recall it to her mental sight, for among the smells of the roses and violets and lilies and wall-flowers, the smell of the freesia penetrated, as a melody stands out from its accompaniement, and gave her the most pleasure."

Scent Profile
The cheerful bouquet of peppery zing and floral freshness projected at the right intensity, a delicious aroma that radiates for a long distance, is what makes freesia flowers so memorable. High in linalool, a major component in all freesia varieties, this small colourful blossom emits a refreshing, floral woody aroma with a subtle citrusy-terpenic note. The mollified sweet aspects, with the nectarous quality of jasmine smelt through ozone, are given a cheerful piquancy by the spicy top note which pinches you by the nose upon stooping to smell the beautiful flowers. The nuance of the blossoms themselves is beautifully varied: white ones are spicier, colourful ones are "greener". The overall character is clean and with a soapy facet, a fact that makes freesia a favorite candidate for inspiring the added scent of soaps, shampoos, body lotions and so forth. It's no wonder freesias stand for innnocence!

Little did Friedrich Heinrich Theodor Freese (1795-1876), a German physician from Kiel, know that the proposal of the name by his friend and plant collector Christian Friedrich Ecklon would result in such a popular cultivar and perfume "note". But it's perhaps even more interesting to note that a minority of Europeans have specific anosmia for freesia, although most Europeans report that freesia is one of the strongest scents known to them! McWhirter concluded that "inability to perceive the scent is a recessive character. Tests of 1,600 subjects showed that the frequency of the recessive phenotype was high in those of Eastern European and British Celtic descent (at about 10%) and low in those predominantly of Scandinavian, English, Dutch, and German descent (at about 4%)" [source] 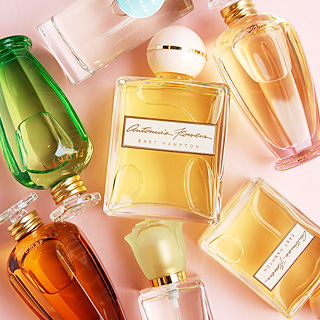 History of a Trend
The trend for using freesia notes in fragrances began when Antonia Bellanca-Mahoney first brought out her Antonia's Flowers perfume in 1984. It is a freesia dominant fragrance because this is the flower sthe famous NYC florist was most enamoured with. The great perfumer Bernand Chant (Aromatics Elixir, Azuree, Cabochard) composed it for International Flavors & Fragrances (IFF) using headspace technology to replicate that electric freshness that natural freesia exude. Antonia was adamant that her fragrance should be free of the tricks of scented seduction, she didn't want a fragrance that would "remind her of old ladies", but one that would be light and reminiscent of her flower shop; she hadn't been using perfume for these reasons and she thought it was time to find one to claim her own. She focused on freesias because they "knocked your socks off, like trumpets in an orchestra; everyone else sings backup, even the lillies". The result was the definitive scent that put freesia on the map.
Since then, not only has Antonia's Flowers become a cult favorite, it also has catapulted an entire avalanche of freesia notes containing fragrances which take this jolting, fresh, spring-like note as a departure point of clean, feminine, pretty compositions for every woman.

Constructing a Freesia Note for Fragrances
Even though a type of freesia oil can be extracted, all freesia notes in perfumery are uniformely synthesized, usually with copious amounts of linalool (the dominant constituent in over half of freesia cultivars), hints of jasmine synths and green notes. Natural freesias in some breeds also display other related monoterpenoids; 2-penylethyl acetate (sweet, honey-like) and benzyl alcohol (fruity smelling) as well as limonene (fresh lemony, sweetly citrusy), ocimene (green and terpenic with vegetable nuances), and alpha-terpinolene (fresh and delicately lilac-like) in supplementation of the linalool. Perhaps one of the most intriguing facets of freesias is that they display ionone (violet) characteristics while living, but they lose those notes when cut!!

The amateur or natural perfumer may opt to recreate a freesia note as need be via using white verbena essential oil, which has plenty of the floral woody ingredient linalool. This is not however a note you often see cited in natural blends, probably because its main use is acting as a "modifier" rather than a dominant character-giving note. Freesia in mainstream perfumery is paired with other clean, crystalline floral "notes" of lab-synthesis, such as cyclamen and lily of the valley, or magnolia, or the shriller, rosier peony.

List of fragrances with a dominant freesia note include: