I recall as a child discovering with excitement the furry exterior of bubble-bees, the kind you don't see any more, the desire to fondle only being overcome by my learned fear of its sting, which would result to a self-sacrificing end for the little critter. No matter that my first sting was only in adult life, when an errant bee was lured by my Fleurs d'Oranger (Serge Lutens), one sunny spring morning. I also recall superstitions upon which bees had to be given the news of a death in the family, and even fed a piece of the sweets and wine of the funeral meal, or they would perish as well. In my apis-loving culture the use of honey, royal jelly, bee pollen and beeswax (cystomarily used in orthodox candles for mass) has always been seen as a survival of a sacred, almost magical act which connects man and woman to the pagan nurturance and divine blessings of mother Nature. It is no coincidence that Greek cuisine makes ample and delicious use of some of the finest varieties of honey for many of its aromatic dishes. Or that babies and small children are still nursed on milk and honey in this country, recalling the nursing of baby Zeus by Melisseus ("bee-man"), father of the nymphs Adrasteia and Ide and the leader of the nine Kuretes of Crete, chthonic daimones of Mount Ida, who clashed their spears and shields to drown out the wails of infant Zeus, hidden from his cannibal father Cronus. 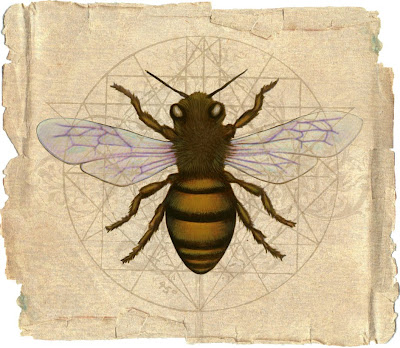 The lore of bees and honey harkens back to ancient civilisations who cultivated the arid, unforgiving soils of the Mediterranean and prized the industrious insects for their rich products and their amazing navigation skills (allegedly via tiny crystals naturally embedded in their brain) which made them easily domesticized. From freemason to wiccan, bees and honey appear frequently ever since antiquity as references to a society that is more tightly ordained than ours and an example of how nature and the eternal female finds a way for everything: even the promiscuity of the Queen Bee is a guarantee of safety and health of the entire hive, according to biologists! The survival of the bee is impressive, much like they themselves are considered a link between this world and the underworld. Mycenean "tholos"-style tombs are shaped to look like a beehive, while Melissa is nothing more than the Greek name for...bee (Μέλισσα), while Deborah is also linked to ancient bee priestesses.

My reprisal of these themes was ingeniously suggested by Roxana of Illuminated Perfume and evolved into this article, as well as a series of other posts in participating blogs (linked at the bottom, don't forget to visit!)

Although bees are related to the cult of Aphrodite (beehives are hexagonal, the sacred shape for Venus) their symbolic origin goes back to pre-Classical cults: The pre-Hellenic Aegean bee goddesses stood for the dominance of the female and the Minoan cult of the Goddess reflects this, if the small figurines, the jewels and the wasp-waists of the women on murals are any indication. A series of bee embossed gold plaques recovered at Camiros in Rhodes, Greece, dating from the archaic period in the 7th century BC reflects far older deities. Fermented honey, thought a gift of the Goddess, preceded the knowledge of wine in Aegean culture as well as in many European civilizations.

The famous golden Minoan "Bee Pendant" depicted on the left is technically immaculate and presents great merit from a conceptual viewpoint. Discovered at Chrisolakos, the burial ground outside the palace of Malia in Crete, it is now surrounded by other sacred objects such as ceremonial Labyrns (giant double axes) and beautiful gold rings and "double axe" and bee jewellery at the Heraklion museum in Crete, Greece. More powerfully, the bee stood as the symbol of Πότνια, "Mistress" or "Pure Mother Bee" according to Minoans and Myceneans. Her priestesses were called "Melissa", same as with worshippers of rural goddesses Artemis and Demeter.
The Delphic oracle was also referred to "the Delphic bee" (Μέλισσα), long after Apollo had usurped the ancient oracle and shrine, in the hymns by Pindar. The Homeric Hymn to Apollo mentions that Apollo's own gift of prophecy first came to him from three bee maidens, usually identified with the Thriae, pre-Hellenic Minoan bee goddesses!

Other peoples also proliferated bee motifs and lore: The Mayans had the Ah-Muzen-Cab (the Bee God), designating honey-producing cities (who prized honey as food of the gods). The Kalahari Desert's San people ascribe the Creation of man to bees: A bee carried a mantis across a river, but when exhausted it left the mantis on a floating flower, simultaneously planting a seed in the mantis's body before it died. From that seed grew the first man. The Egyptians believed bees to grow from the tears of the sun god Ra when they fell on the desert sand (much like the foam of the sea was considered by the Greeks to be the sperm of the cut genitalia of Cronus from which Aphrodite emerged). The bowstring of the Hindu love god Kamadeva is made of honeybees and Vishnu is often depicted as a blue bee. 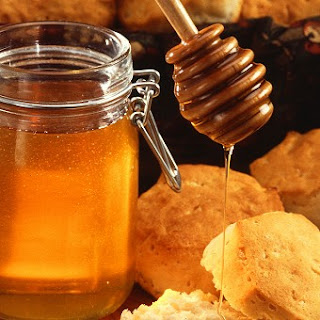 Endless varieties of honey exist according to the raw materials the bees have been harvesting to produce it and the rich aroma of each one is testament to the wonders of nature. From the more unusual, such as the almost camphoraceous honey from eucalyptus and manuka trees from Australia, to the spicy, raw bouquet of buckewheat honey through the mild and popular one from clover, one marvels at the spectrum. Ambery-dark heather honey is full of the wildlife pungent aroma, while thyme honey with its perfectly balanced, savoury taste and herbal aroma is prized among the very best. Pine and fir trees' honey is very pleasantly a tad bitter with resinous nuances, as befits the source. Honey produced by bees harvesting acacia blossoms is especially worthy of mention: sweet like the yellow pom-poms that adorn the trees, its high fructose, low sucrose content presents some advantages concerning diabetic consumption as well as better storage capacity; same with the one from linden, because of its lightly woody olfactive profile which makes it a refined option.

Apart from the amazing flavour, all honeys contain phenolic acids and hydroxymethylfurfural, the levels being highest in thyme honey, which are purported to influence estrogenic activity and cell viability of breast, endometrial and prostate cancer cells. And of course the hydrocaptive and antimicrobal properties of honey make it a supreme addition in skincare and cosmetics, promoting hydration and health of the skin. 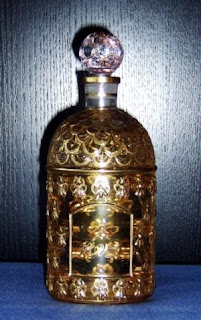 Interwined thoughts revert to me as I admire the delicate yet at the same time impressive motif of Napoleonic bees crowning the rims of the exquisite chinaware Les Abeilles by Haviland Parlon, the pattern directly originating from the time of the great dictator. Most people interested in perfume have owned, heard or read of Guerlain "bee bottles" (flacons d'abeilles). These glass or gilded flacons have small Napoleonic bees on relief, wonderfully referencing French royalty and its history, bees being alongside the more traditional royal symbol, the eagle, the emblems of the First and later Second Empire.
Napoléon I had a veritable mania for the industrious insect, which he had made into a symbol of his own reign; even made it into a flag and a cloak, wearing which he was painted by David. Bees long standing symbols for immortality and resurrection, they linked the new dynasty to the very origins of France, more Merovingian than Napoleonic: Golden bees (cicadas, to be exact) were discovered in 1653 in Tournai in the tomb of Childeric I, founder of the Merovingian dynasty (457AD) and father of Clovis. Therefore they are considered the oldest emblem of the sovereigns of France to whom the ambitious leader wanted to be tied to. The bee also presented the advantages of not being symbolically tied to the despised Bourbons nor Christianity.

Another version wants Napoleon moving into the Royal Palace at Tuileries and not wanting to keep the existing drapery with its embroidered fleur-de-lys (the previous French Royal emblem and one which also alludes to Mary, mother of Jesus). Being frugal on spending on new ones, he ordered them instead to be turned upside down, thus offering the world a new symbol: the bee. Lastly, conspiracy theorists might attribute his choice to freemasonry, where the bee stands as a hieroglyphic of the highest order.
Popular references to bees however are much simpler: From the dramatic cone-shaped hairdo of the 1960s known as the "beehive" to the Beehive Bundt cake which would make Martha Stewart proud!

Feel free to add more fragrances with honey notes in the comments section!