I sometimes wonder what would happen if the art of fragrance naming is asked to be, as the French would put it, en clair―to speak in plain language. 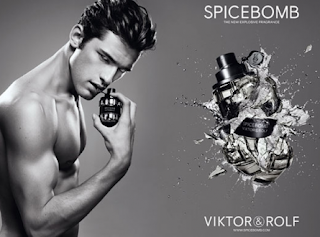 ~by guest writer AlbertCAN
I am by no means chiding the mass launches, for niche brands wax lyrical, too. (Case in point: Serge Lutens Daim Blond ought to be Daim Abricot.) Viktor & Rolf’s latest masculine introduction, Spicebomb, could benefit from en clair. To spell out its proper name would probably look a great deal like this:
Une ‘grenade’ ambrée à la manière de Tom Ford Tobacco Vanille avec un peu de L’Artisan Parfumeur Tea for Two
(An amber ‘grenade’ in the style of Tom Ford Tobacco Vanille with a little bit of L’Artisan Parfumeur Tea for Two)
Of course, the ironic thing with the truthful title above is that a copyright infringement lawsuit would probably ensue, followed by the requisite injunctions and appeals. And how to fit the sentence above onto the bottle is beyond mysterious to me. So, no in a million years. Yet it is probably the most apt description of the scent one could find, for the similarities between the scents in question are uncanny.
Now one might notice that that I’ve put quotation marks on the word ‘grenade’, for although the campaign promises something explosive and daring Spicebomb is hardly so. In fact the bomb motif is really a hand-me-down from V&R popular franchise Flowerbomb (2005), more of tie-in for marketing integration purposes. It’s a handsome tobacco-infused amber dandy with a fair hint of spice, but hardly a bomb threat as suggested by model Sean O’Pry’s tease with the grenade safety pin.
The resemblance between Spicebomb and Tobacco Vanille is truly remarkable, although I wouldn’t call them Siamese twins. V&R Spicebomb opens with candied citruses—or so I call them since synthetic bergamot and grapefruit are tempered further with fruity pink peppers, giving the scent a suave, silken sheen. It’s on the sweet side, though short of the full-on dried-fruit effect found in Tom Ford’s opus. The bouquet is really ho-hum and plays second fiddle to the tobacco accord, which really asserts its dominance after a short introduction. The press-release lists the tobacco as the base note but it really acts front and centre like a heart note since the scent is so character driven, forming a very obvious alliance with vetiver and amber. Knowing Spicebomb’s creator, Olivier Polge, I would bet my money on the liberal use of ambroxan (and even some tonka bean) when forming the amber—and indeed that amber motif is evident in Dior Homme, another creation by O. Polge. The leather and elemi are there, too, although really upholsterings to create subtle dried fruit facets. On the other hand I would say Tobacco Vanille lacks the spicy edge, though it’s hardly a surprise when the name is Spicebomb—what comes with the subtle spice is the real surprise.
Tea is nowhere to be found in Spicebomb’s press release, but the smokiness found in L’Artisan Parfumeur Tea for Two (2000) is fairly evident in the drydown of Spicebomb. It’s by no mean literal, for there’s nothing transparent or soft about V&R, but the spiciness is there—a touch, really—once its presence is felt. To me it isn’t the main attraction, just there to keep things in good social order.
Thus given all the information above Spicebomb is an interesting breed: Considering V&R license is owned by L'Oréal, one of the more conservative cosmetic conglomerates out there, having a mass-market launch based on two niche offerings—with Tea for Tea being discontinued to boot—Spicebomb is a slick take on past creations, almost like a ready-to-wear referencing a Tom Ford couture. Yet does it really take a perfumer of Olivier Polge’s calibre to do such faithful reference? I honestly don’t have an answer to that, and I might have gotten a bottle if: 1) I didn’t have a small bottle of Tom Ford Tobacco Vanille, which I have, and 2) If the bottle for Spicebomb were more sleek, as the tinted bottle looks a bit clumsy in person. Mind you, if I were given a small bottle I wouldn’t mind wearing it from time to time.* But I’m probably not detonating Spicebomb anytime soon.
Viktor & Rolf Spicebomb is created by perfumer Olivier Polge and contain notes of bergamot, grapefruit, elemi, pink pepper, cinnamon, saffron, chilli, leather, tobacco and vetiver. The bottle is designed by Fabien Baron. My review is based on a free sample I received from a sales associate at The Bay, who was horrified by me using Dior Eau Sauvage and promptly quipped, “It’s really for old men, no?” (Thank goodness I’m not buying anything from her.)
*Read: This is not a hint. Do not consider buying me this as a present: and I’m not being ironic.