It's probably not strange, but certainly unexpected, that a figure with retro connotations such as comte Robert de Montesquiou-Fézensac (who inspired not only Marcel Proust but also Joris-Karl Huysmans) should come out of a recent batch bottle of a Guerlain fragrance! Yet this is what happened when I tested Arsène Lupin Dandy, a scent that intrigued me for a long time before I put my thoughts into black & white.

(EDITOR's ADDITION: Please NB, due to ensuing legal disputes with L'Orsay who also have a Le Dandy fragrance, Guerlain has since dropped the Dandy from the name and now this is available as simply Arsène Lupin. The rest of the review mentions it with its older, longer name as that is what it was launched with at time of writing) 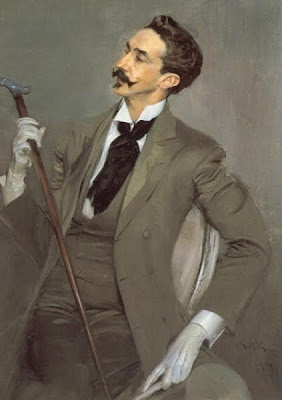 Given Jean Paul Guerlain's unfortunate recent comments and the futore which ensued, it's doubtful that we'll see another fragrance bearing his signature in the future. More's the pity, because amongst great perfumers of the 20th century, alongside his ascendant Jacques Guerlain of course, Ernest Beaux and Edmond Roudnitska, he certainly takes a place in the pantheon. Arsène Lupin Dandy, infiltrates Les Parfums Exclusifs, joined by Arsène Lupin Voyou, both in Eau de Parfum like the double face of Janus, and some of the other exclusive masculines (details here), is indeed a swan song of infinite grace and refined luxury. Much like some of Jean-Paul's best creations of his "golden years" such as Vétiver pour homme, Chamade, Habit Rouge (not Sport) and Chant d'Arômes , Dandy manages to exude richness without heaviness and luxury without one iota of vulgarity. This is how Guerlain ought to be constantly! Preferably in the mainstream sector as well.

Jean Paul collaborated, according to his own testimony, with in-house Guerlain perfumer Thierry Wasser to whom he passed the baton, on the two new masculine releases in their teak-wood-edged bottles. We will probably never find out the exact truth (especially given the two releases smell completely different and as if arrived at by different mentalities), so it's futile to press the point. Of the two fragrances, Dandy easily is the standout; the reason isn't hard to see.

Within this contemporary light woody chypre one can detect the emblematic character of 1920's & 1930's fragrances that made the reputation of Guerlain Parfumeur, such as Sous Le Vent (which which it shares the bitter green tinge of galbanum and the overall chypre elements, although it substitutes the murkiness of oakmoss with the quite different treemoss alongside patchouli and probably a smidge of vetiver). But it's also a modern enough accord to be featured in Martin Margiela's Untitled! The "nose" is reworking the best elements in the Guerlain tradition into formulae that are completely modern and can stand on their own in today's market.

Dandy is a grey suede leather which opens dark only to reveal lovely powdery nuances derived through ionones (floral violet & iris notes) and some spice later, very finely worked and flanked by patchouli and a resinous incense note. The citric aspects of the olibanum (frankincense) are complimentary to the hesperidic notes, which have a pleasantly restrained bitterish tinge, much like bergamot "spoon sweet" is the nicest to consume (same with sour cherry) because the natural tanginess of the fruit offsets the sugary aspects. The same effect is witnessed in maple suryp, which also has a passing resemblance with the resinous note in Dandy. The leather accord, immediately perceptible from the start, is in reality soft, maleable, velvety, echoing the suaveness of the literary character who inspired it. The literary character Arsène Lupin began his fictional life in 1905 (under "Lopin", until a namesake politician protested), smack-right into La Belle Epoque; an enigmatic figure in black-tie respendid with white gloves, a cape and a monocle, relieving the haute-bourgeoisie of their money, which seems like the perfect analogy for the clients of Guerlain Exclusifs!
The spices on the other hand (peppery bay and cardamom) provide a piquant tongue-in-cheek touch, fanned over the more predictable musk & light amber/labdanum impression of the far drydown, denoting the idea of a delicate "skin scent". The fragrance reads as a ballad of binary form.

For all its underlying complexity, appreciated through repeated wearings by both men and women who can snatch this easily for themselves, Arsène Lupin Dandy is a scent that does not proclaim its intricasies up front and keeps a cultivated air of mystery in the very best Voltaire tradition.

For our readers a draw of a small decant out of my own stash: Say in the comments which is your favourite Guerlain fragrance and why and I will pick a random winner. Draw is now closed, thank you!