"Funny business, a woman's career. The things you drop on your way up the ladder so you can move faster. You forget you'll need them when you get back to being a woman." The apothecary splash bottle of Sous le Vent by Guerlain resting atop my dresser with its black, disk-shaped label with gold lettering encircling it, makes me think of the logos of old cinematic companies long defunct starring dramatic heroines with high cheekbones hissing deathly lines clad in impeccable tweeds or gala-time smooth silks. Betty Davies in "All About Eve" comes to my mind as she utters those lines, her character in stark contrast to the outwardly maudlin yet steel-hearted assistant-cum-antagonist Eve Harrington. 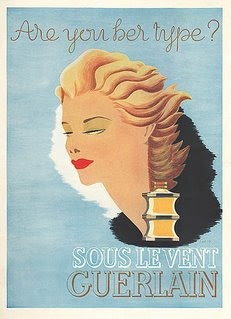 Although a literal translation would indicate "in the wind", Sous le Vent is French for "leeward" after the name of the tropical Leeward Isles of the lesser Antilles in the Caribbean: indeed the islands are divided into Windward and Leeward groups. Many among those "greener than a dream" isles were colonised by the French, accounting for an interesting, non-coincidental analogy ~the fruit of the Americas which has been Frenchified into Créole. Sous le Vent was composed by Jacques Guerlain for Joséphine Baker in 1933, according to the charming pamphlet provided by the boutique, as a pick-me up for applying after her notorious dance performances in which she often appeared in nothing more than an all too brief skirt made out of bananas on a string. Strutting her proud gazelle frame in the streets of Paris with a pet leopard in tow made everyone forget about Freda Josephine McDonald's humble St.Louis, Missouri birthplace and her vaudeville beginnings, evoking instead the glamourised image of a jungle animal: fierce, supple, ready to leap! And long before Angelina Jolie and Mia Farrow, she had adopted her own Rainbow Tribe: 12 multi-ethnic orphans, proving that titillation of the public and activism aren't mutually exclusive.

It is of interest to note in the iconography of Guerlain print material on their 20s and 30s scents that Sous Le Vent was featured in characteristic illustrations in the "Are you her type" series that included Mitsouko, Vol de Nuit , Liù and Shalimar, indicating that its eclipse among the classics in subsequent years was not due to a lack of intent. Les garçonnes were its natural audience but the ravages of WWII brought other sensibilities to the fore making an angular androgyne scent antithetical to the femme totemism of the new epoch in which the purring, slightly breathless tones of Marilyn Monroe caressed weary ears. It took Guerlain decades to re-issue it; finally a propos the refurbishing of the 68 Champs Elysées flagship store it was the second one to join the legacy collection affectionally called "il était une fois" (=once upon a time) in 2006 after Véga.

I am in the lucky position to be able to compare an older batch of extrait de parfum with my own bottle of the re-issued juice, and although Luca Turin in his latest book claims that the new is very different from his recollection questioning whether it is his memory or Guerlain's "that is at fault", I can attest that the two are certainly not dramatically different. Being a favourite of the black Venus of the merry times between two world wars, should give us a hint that Sous le Vent is a strong-minded affair of great sophistication and caliber. Difficult to wear as a scent to seduce or invite people to come and linger closer due to its acquiline nature, but very fitting as an unconscious weapon for a woman about to close a difficult business deal, embark on a divorce case or hire a professional assassin. It transpires strength! To that effect the vintage parfum offers rich verdancy, a mollified fond de coeur that is perhaps justified by the very nature of the more concentrated, less top-note-heavy coumpound needed for making the extrait or the diminuation of the effervescent citrus top notes. The modern eau de toilette is a little brighter, a little more streamlined and surprisingly a little sweeter in its final stages, yet quite excellent, making it a scent that always puts me in an energetic good mood wherever I apply it lavinshly -because it is alas rather fleeting- from the bottle.

Technically a chypre, yet poised between that and an aromatic fougère* to me, Sous le Vent bears no great relation to the mysterious guiles of Guerlain's Mitsouko but instead harkens back to the original inspiration behind it, Chypre de Coty, but also to another Guerlain thoroughbred ~Jicky (especially on what concerns the aromatic facet of lavender in the latter's eau de toilette concentration). Sous le Vent is both greener and fresher than Mitsouko and Jicky nevertheless, as it eschews the obvious animalic leapings yet retains the cinnamon/clove accent which will later be found in the fantastically "dirty" and underappreciated Eau d'Hermès. All the while however the piquancy that makes Coty's iconic oeuvre as well as Jicky so compelling is unmistakeably there. 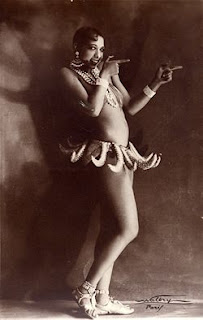 Sous le Vent starts with a rush of subtly medicinal top notes of herbs that smell like lavender, rosemary and tarragon, a full spectrum of Provençal aromata. A tart bergamot note along with what seems like bitterly green galbanum skyrocket the scent into the territory of freshness and a smart "clean". Its next stage encompasses dry accords, soon mollified by the heart chord of a classic chypre composition of dusty moss with the sweet tonality of generous flowers that evoke the banana fruit: ylang ylang notably and jasmine sambac. In the final stages I seem to perceive the dusky foliage of patchouli.

Potent and assertive thought it first appears to be, a take-no-prisoners affair for a lady who was known to dance with only a skirt of bananas on, leaving her country for France and being idolized by all social strata, it screams of individualism and élan; yet strangely Sous le Vent, especially the gangly new version, doesn't invoke the scandalising side of Josephine nor her exuberant nature. Complex and elusive, it is certainly not an easy option for today’s women's sensibilities; it is rather too cerebral, too intelligent for its own good, not sexy enough. These qualities however would make it a wonderful masculine addition to a cocky fellow's repertoire. This travel back into more glamorous and individual times is worth the price of admission. Wear it if you are really interesting as a person, it will only enhance that quality.

The vintage parfum can be found on Ebay from time to time. The current re-issue in Eau de Toilette concentration is part of the Il était une fois collection exclusively sold at boutiques Guerlain and the éspace Guerlain at Bergdorf Goodman, housed in an apothecary style cylindrical bottle of 125ml with a gold thread securing a seal on the cap.

A sample of the modern re-issue will be given to a random lucky reader!

*Fougère is a classic olfactory family -mainly of masculine scents- that relies on a chord of lavender-coumarin-oakmoss.