When the perfume gods are chastising your Hubris (in this case taking the original Opium and changing the hell out of its familiar, groundbreaking spicy bouquet "thanks" to IFRA restrictions), Nemesis comes in the guise of bland innocuousness meant to flop, namely Belle d'Opium. Long forgotten are the droves of protest ~and inevitable adoration~ on the addictive powers of the original Opium by Yves Saint Laurent; the almost contraband repackaging in certain countries so that it wouldn't pose challenges at customs; and the Australian peanut growing governor who banned its sales in his county. Belle d'Opium merely raises an eyebrow at best with its almost masculine structure, which isn't wholly intentional and belies the fanfare and the Romain Gavras commercial (watch here) with which it was launched to the scene a little while ago. 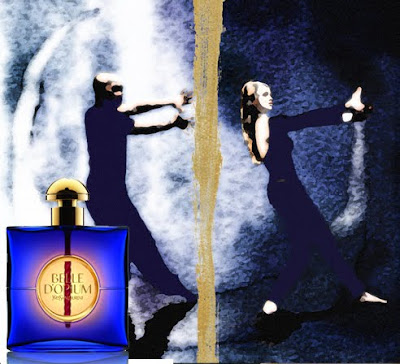 It's no fault of the competent perfumers, Honorine Blanc and Alberto Morillas, but rather a capitulation to the sacrificial pyre that the "Intentional Fragrant Abyss" (our own patented IFRA acronym, which seems more like it) is pushing most modern perfumes into. Firmenich, who produces the juice for bean-counters L'Oréal, is obviously too afraid to bypass these new restrictions and given a cheapskate budget they are following the bland and confused brief to the letter: Make a programatic spicy floral-oriental for people who are afraid to venture outside Lahore for fear of coming to terms with real poverty and those who think visiting Paris means shopping for scarves signés, stuffing on croissants and doing Le Louvre in under 3 hours.
Oddly, the perfumers were obliged to pronounce such silliness as "the fragrance was inspired by France's cultural references such as the Belle de Jour film or Belle du Seigneur book [they wish!] but also international references, like Bella Swan in Twilight [there you go!] who is a fresh-faced young woman, a romantic figure later acquiring dark psychoses." [sic, I kid you not]. It's very bad timing that Armand de Villoutreys, president of Firmenich, was put on record in the September issue of Cosmétique Mag admiting there is no time for the company to work properly: "We receive an avalanche of briefs and the whole chain is overheated. It's mechanical, in the sense that we ought to be very quick and we don't have the necessary time to devote to each step". Uh huh...

Although the listed notes of Belle d'Opium include jasmine, gardenia, peach, sandalwood, lily and pepper, I'm scared to report that the whole smells of neither, but rather an abstract and shapeless spicy-woody composition, beggining with a muted fruity-cardamom note and ending in the familiar woody-ambery-patchouli drydown of myriads of modern fragrances, plus an incense hint. Spicy perfumes, like masterful ganster films, have the great advantage of having a core duet of players who battle for reign within the gang crossing each other and siding with other forces in order to prevail; you're at the edge of your seat to see who will overpower whom. Just observe the majestic (and statement-making) Poivre by Caron with its pepper & clove shot-down at dawn. If only Belle d'Opium had the guts to double-cross its partners, we might have something memorable in our hands. As it is, we're not only far from -even- PG13, but firmly into the Nickelodeon channel.

To add insult to injury, neither the sillage nor the lasting power are technically adequate for an Eau de Parfum, which ~with said perfumers involved~ suggests a quickly churned out "generic" please-the-masses deodorant for the price of a proper perfume.
What bugs me most? According to inside info I have the name Belle d'Opium was chosen to ride on the heels of Yves Saint Laurent's best-seller and will be eventually pulled in favour of simply "Belle". If Belle reminds you of... B'Elle (a fictionary flanker of Elle by the same brand maybe?), it's because that's the concept to begin with. Be Elle? Nah....Shame, really!

Available at major department stores in Eau de Parfum concentration (from 53 to 90 euros).