What does it say if a perfume writer ~who is supposed to stay atop trends and new things (or at the other end of the spectrum occupy herself with rhapsodising over classics and unearthing rare vintages)~ decides to write about a perfume by Italian jewellers, coming out as recently as 2008 and semi-forgotten amidst the plethora of new releases? Is it a testament to delayed reflexes, that upon revisiting Jasmin Noir by Bulgari (or Bvlgari if you want to keep the Roman spelling) several months after its launch, I found myself captivated mid-bottle by its rich, woody, full-bodied and curvaceous silhouette? At this point, I cannot deny the pull that a mainstream but really well-made fragrance can exert upon me. 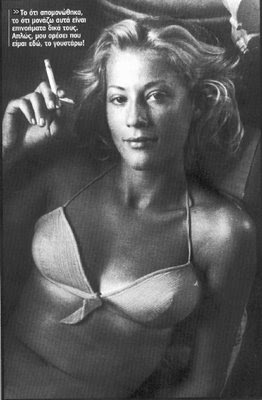 After a handful of maudlin and wall-paperish "me too" scents by the brand in recent years, like Omnia Green Jade, Voile de Jasmin or Bulgari Aqua, I didn't really expect waves; yet I was pleasantly surprised to find myself curiously attached to my classic bottle which reprises the elegant, frosty glass lines of Bulgari Pour Femme, only this time in lacquered black. Perfumers Carlos Benaim and Sophie Labbée at IFF nailed it this time around: The composition smells rich and classy, with a succulent hint, but not too floral and rather subdued, fulfilling the criteria of modern consumers in the 25-40 group to which they originally catered for. A concept well visualised in the commercials featuring Kate Moss with serious bling on her neck. But the fragrance stands on its own two feet, away from any industry brief or statistical focus group aspirations.

If Jasmin Noir isn't more sung by the perfume trobadours, it has to do with a certain incongruity between name (and therefore promise) and delivery: This is a floral woody rather than the reverse, with segments taken from both Sensuous by Lauder and Tom Ford's Black Orchid, while the emphasis is neither on jasmine nor on any sinister noir proclivities. Bulgari themselves say: "Jasmin Noir is a flower of the imagination. It is white, immaculate, and conveyes pure mystery, revealing intriguing sensuality at nightfall". And I would have to agree with the imaginative part as well as the sensuous promise, if not the white descriptions which leads one to expect a white floral.
Bulgari's Jasmin Noir starts on the sparkling green note of budding gardenia (full of the piquant, fresh note of styralyl acetate) opening into a vague ~not very identifiable~ fresh jasmine vine accord which soon exits the scene. Floral haters shouldn't be frightened, nor should indole-phobics pause: this is the equivalent of a thriller by Roman Polanski; blink and you miss the scary parts, it's so subtle. Nutty and lactonic (milky) accents and the dominant, permeating, pleasant scent of licorice then appear, muting the floralcy and embracing the whole in a different sort of sensuality than that of white flowers; cozy, youthful sexy, very modern with a good dose of aromachemical Ambroxan, but not insipid. This stage lasts at sotto voce (we're talking quite discreet sillage here) almost for the duration of the fragrance's presence on skin, taking a subdued ambery-vanillic haze, flou and sustained for a long, long time. The perfect "I miss your scent on the sheets" kinda of fragrance...

People who like Tom Ford Black Orchid Voile de Fleur for its emphatically feminine floral notes (tuberose) and also like the woody backdrop of the original Black Orchid but are seeking to branch out a bit, are advised to try Jasmin Noir by Bulgari. Lovers of Guerlain's 90s classic Samsara who want something more subdued and youthful might find in Jasmin Noir a helpful ally. Men who are not averse to a little sweetness (and anise) with their cologne and like the idea of Lolita au Masculin might steal a spritz or two as well.

Jasmin Noir is available in Eau de Parfum concentration from major department stores and from bulgari.com.