Gustave Claudin writes about Marie duPlessis in Mes Souvenirs: “She was fickle, capricious, wild. She adored today what she hated yesterday. She possessed natural elegance to the utmost degree. One could certainly say she had style. No one could copy her originality. As long as florists were able to provide them, she always went out with a bouquet of white camellias”. 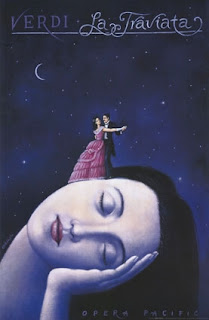 Marie Duplessis is none other than the inspiration for the character of Marguerite Gautier, famously known as “la dame aux camellias”. Her natural sensuality and maturity beyond her years are a logical fit for a perfume like Attrape Coeur, formely known as Guet Apens. 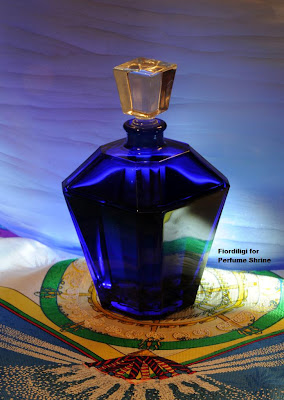 La belle de nuit aux violets that is Guet Apens was composed as a limited Christmas edition by nose Mathilde Laurent 10 years ago (1999) when Guerlain had its first inflow of funds from LVMH's initial investment. A slight retouche by Jean Paul Guerlain three years later resulted in another Limited edition called simply No.68 (not to be confused with the new Cologne du 68 ~for a complete breakdown of that entanglement please see my detailed article here)
Was the sobriquet non sonorous enough to English-speaking ears to keep it in production? The resinous, powdery, vanillic juice at the core of No.68 bore ties of consanguinity with both Guet Apens and Terracotta, you see. 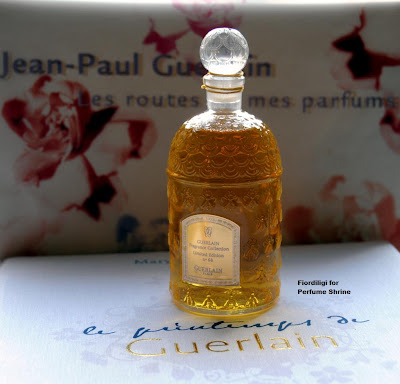 Guet-Apens was finally renamed Attrape-Coeur and since 2005 has joined the ranks of the permanent collection of Guerlain to the rejoice of perfume lovers, reissued upon the occasion of the renovation of the flagship Guerlain store on the Champs-Elysées. Although the scent is usually credited to Jean Paul Guerlain (rumours want the then working on Guerlain project Insolence, perfumer Maurice Roucel to also having had a hand in it), the original scent was composed by Mathilde Laurent, the nose behind the controversial Pamplelune with its sulfureous grapefruit and Shalimar Eau Legere/Shalimar Light (the 2003 version) which was so fabulous. Tact prevents me from elaborating longer on the possible rupture, but suffice to say Mathilde Laurent is now composing scents at Cartier.

The phrase Attrape Coeurs means "heart-catcher" and it is lovely in its connotations, although it can have its adversaries too. Hearts are usually a corny matter, depicted in nauseating permutations as a symbol of romantic love. Guet Apens on the other hand means "ambush" in French, which makes for a much more intriguing name, but maybe that is just my opinion. For Attrape Coeur I think of a seducer, a woman who is out to get men entrapped in her tentacles, but all that done in a most elegant and non calculating, non vulgar way

In a way it goes way back to another era. It evokes the real Marguerite Gautier, famously known as “la dame aux camellias” and her influence on French society, both as the heroine of the novel by Alexandre Dumas fils and as a representation of the Parisian courtesans of the 19th century. Modeled after a real person, Marie duPlessis (real name Alphonsine), lover of Listz at one point and of Dumas naturally, dead at only 23 years of age due to consumption but having made her reputation already, Marguerite is a very alluring personality. With her pale complexion due to tuberculosis and her manners of a grande dame she captures the attention of the Parisian high society. Camellia of course in not featured in Attrape Coeur (it has no significant scent anyway), rather dark violet is, which is very apt taking in mind that Violetta is the name of the heroine in the opera version of the novel La Traviata (which literally means "woman who strayed") by Guiseppe Verdi and numerous theatrical versions, hence the association.
In the enchanting and nostalgic Langage des fleurs, a book by Charlotte de la Tour, violet stands for secret love. Violets then with a little underscoring of woods and iris form the core of the perfume. 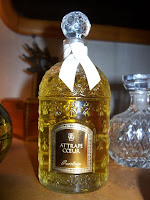 Identifying Attrape Coeur as a Guerlain happens after it sheds its veils like Salome one by one. The opening of Attrape Coeur is as if iris got suspended in a snowy mirage, fresh, tingling, hazy, reflecting light in all directions, not unlike the charming disposition the demure Apres L'Ondee coyly reveals. A little fuzzy, fruity tone (reprised in MDCI Promesse de l'Aube and Chinatown by Bond no.9) smiles with the beatific smile of golden mosaics in Roman villas. The glycaemic nuance of violets, undescored by a mysterious greeness, a fleeting earthiness, is winking in a jar on the countertop of a French patisserie in Toulouse. And all is poised over an animal's warm, vibrating belly as it luxuriates in front of a blazzing fire.
Even jasmine makes a brief appearance, but then I regrettably lose it: it’s a lovely jasmine note like that in another Guerlain, Flora Nerolia: it remains fresh, green and dewy. Compared to other offerings from Guerlain the base is somehow between Shalimar and L’instant : not as animalic as the former, not as sweet and –dare I say it?- cloying as the latter, it combines the element of eathereal iris and sandalwood in order to give stability and powdery dryness that is much needed to bring balance to compositions based on sweeter elements. The creaminess and luxurious, plush feeling of Attrape Coeur remind me of the opulence of Bois des Iles by Chanel; but whereas the latter focuses more on gingerbread-like milky sandalwood, the former is anchored in powdery, warm amber. It's that alloy that gives the tone, with a little vanilla, tonka and perhaps civet (which I was not aware of particularly, meaning it is restrained), so characteristic of Guerlain perfumes. Attrape Coeur is formally classified as a "fruity chypre rose animalic" (although to me the rose is safely tucked in there) and gives me the feeling that were Parure composed with peach and violets instead of plum and lilacs it would be quite close in feeling.

Attrape Coeur has a lingering, creamy aura of ambery woods which makes it very popular with people enamored with comforting scents, blooming on the skin and lasting on my wrists the span of a whole day going on well into the night. This is especially satisfying rising from a plunging decolleté as it is such a wonderful perfume and a nice surprise at this time of fleeting perfumes that make us apply over and over again.

To add to the confusion ~noting the additional "s" in the name which appears by mistake in "Perfumes, the Guide"~ let me mention in passing that a special Bacarrat edition of L de Lolita Lempicka in extrait de parfum with golden netting and blue topaz is also nicknamed L'Attrape Coeur and that L'Attrape-cœurs is the French title under which the novel by J. D. Salinger more widely known as Catcher in the Rye circulates under. Talk about picking a popular name! 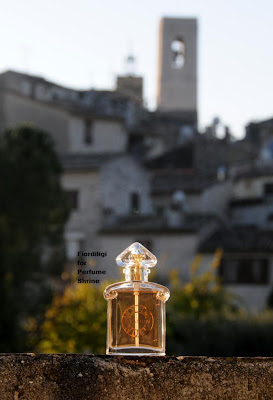 On the other hand, Guerlain themselves, further the confusion. Vol de Nuit Évasion , introduced in 2007, is despite the name a completely different fragrance than the classic oriental Vol de Nuit from 1933. The Guerlain tagline presents it as "a nomadic homage to a classic scent". But actually it is simply the Eau de Toilette concentration of Attrape Coeur !(This was confirmed, apart from my own nose, by official Guerlain representatives later on). Yet it is circulating only at duty-free stores in France at train stations and airports (contrary to Osmoz's quote linked); clearly aimed at the travel-retail market which is experiencing a resurgence. Considering it's 1/3 of the price of the exclusive Attrape Coeur, it's a great bargain and not to be missed if you get a chance.
The bottle is following the classic emblematic design of Mitsouko and L'Heure Bleue with the upside-down heart stopper (slightly vandalised in the upcoming La Petite Robe Noire) but with the "circle" design of the name which appears almost cinematically-styled on the Sous le Vent flacon now. A lower concentration means Vol de Nuit Évasion whispers in hushed tones whereas Attrape Coeur would sing like a dramatic soprano (which is indeed the direction in which La Traviata's Violetta is taking). It's a good middle ground.

And a little footnote on Guerlain Ambre: Notice this is the bottle lantern design used in Guet Apens! And as to how Guerlain Ambre smells, I will leave you to perfume historian Octavian Coifan: 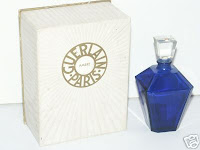 "Ambre (1890) is said to be the first perfume of Jacques Guerlain. It is a very delicate and refined perfume based on the smell of ambergris tincture. It is not a sweet perfume (the ambre 83 type) but dry and deep. It has incense rezinoid, woody notes, labdanum, some balsamic notes (benjoin), orris. It is profound and dusty as the church wood or the very old books. A simple perfume that evokes a ray of light in an abandoned sanctuary."

Pic of Guet Apens, No.68 and Vol de Nuit Evasion by Fiordiligi (copyrighted), authorised for use on Perfume Shrine; of Attrape Coeur bee bottle shot by eowjdula/mua, of Guerlain Ambre via ebay. Artwork by Rafael Olbinski via allposters.com.
*Share with link: Friday, January 16, 2009