Why would a legend need modernising? Why would anyone take a mythical perfume such as Shalimar and create lighter versions of it?
The answer is simple and rather alarming on certain levels: the modern young consumer doesn't especially like the original Shalimar by Guerlain. I said "alarming" because the passing of years and change of tastes means a diminished turnover for the product and because it entails tampering with a landmark in the history of perfumery. However surely the presence of flankers (follow-up fragrances that share some common traits with the mother-fragrance in terms of name and design) means that the original fragrance is successful and well-known by reputation. Otherwise it wouldn't make sense commercially!

Indeed Shalimar presents a difficult problem: its status makes it iconic, but the modern consumer too often perceives it as musty, terribly old-fashioned, with too much "skank" (the term Americans use for heavy, pungent animalic scents, but also for exhibitions of vulgarity by non-ladylike women). Although, as previously discussed, it has been tampered with through the years ~for both reasons of allergens being included in the original formula and unavailability of certain key ingredients~ Shalimar still retains its aura of decadent lack of inhibitions and musky radiation of predatory élan. Therefore Guerlain embarked on an adventure of modernisation. 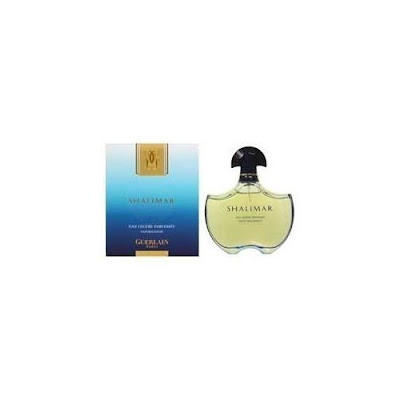 The first attempt in Shalimar's modernisation was introduced in 2003, created by Mathilde Laurent (who also created the formidable Guet Apens/Attrape Coeur for Guerlain) and was baptised Shalimar Eau Légère. Arguably the name sounds like anathema to hard-core perfumistas everywhere: who has ever thought of a Diet Shalimar? The cornering of an alternative market however proved to be a wise decision and a good move in terms of business stategy: Shalimar Eau Légère appealled to younger women who had only vague recollections of the original or even actually found the original difficult to wear yet were keen to own their own Guerlain piece of history. And it also appealed to a certain Rock n'Roll side of some of us, with its print ads featuring Patti Hansen with her two daughters by husband Keith Richards of the Rolling Stones, Alexandra and Theodora. The setting of boho-chic clothes and luxurious baroque interiors touched a sensitive chord: tradition and modernity could co-exist!

How is Shalimar Light/Eau Legere different than classic Shalimar?
The effervescent composition of Shalimar Eau Légère sidetracks the musky, animalic base in lieu of a lemon-cupcake accord that is deliciously cool, folded into a fluffy vanilla cloud with abstract woody and lightly smoky tonalities. The opening, sustained for several minutes, is refreshing and yummy like so many modern compositions that focus on that accord, with I Love Love by Moschino and Light Blue by Dolce & Gabanna being prominent commercially successful examples. Whether that was at the back of the minds at Guerlain headquarters or not, is debatable.
It certainly smells like a modern fragrance, but at the same time it retains some of the haunting recklessness of the original mysterious beast with its recognizable sweet-ish oriental and sandalwood notes. That could be attested by testimonies of its underlying naughty nature still being perceived by people who have smelled it on my person. The DNA, the pneuma is there but the offspring is its own person and it lends itself to some wonderful wearability on the part of many perfume lovers such as myself.


In what was a business decision when Mathilde Laurent fell out with Jean Paul Guerlain, a rejingled version was issued about one year later and credited to Jean Paul Guerlain. Although the two are very close, the later interpretation is even more restrained and less complex in the base with a lime-like top note that echoes sparkly beverages instead of lemon and bergamot. 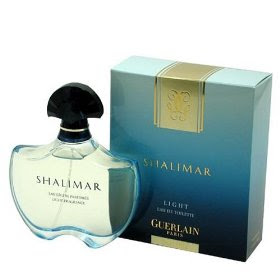 This small difference in smell presents a problem of differentiation between batches, since the resulting version is widely known as Shalimar Light, yet it appears that both that name and Shalimar Eau Légère Parfumée appear on the bottle with a line break.

The best way to ascertain which batch you are smelling or buying is looking at the colour: the earlier version is straw-coloured in a bottle with a blue-ish edge along the sides and bottom, while the later version is somewhat bluer.
The fragrance came in a light blue box with a light-golden-beige interlay where the traditional black was, different from the usual Guerlain boxes and featured the name Light on one side and Eau Légère Parfumée on the other.

Neither Shalimar Eau Légère nor Shalimar Light are in production, both being limited editions of Eau de Toilette, but erratic batches of the discontinued fragrances do turn up on Ebay, peripheral stores and discounters from time to time.

The Introduction of Eau de Shalimar, a 3rd Version

Eau de Shalimar is the latest version in the Shalimar flankers stable, introduced in April 2008. Curiously it is attributed to Mathilde Laurent, who however left Guerlain for Cartier 4 years ago. Whether its juice is the same as any of the previous attempts has been the focus of a search for minutiae among perfumephiles who pay attention to every move of their favourite house, myself included. 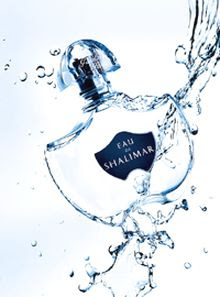 Eau de Shalimar seems like a face-lift that has resulted in too attenuated features: there is nary a little frown and that deducts something of the lived-in quality that Shalimar possesses. The rumour of an inferior bergamot essence replacing the vintage ingredient and the shortages on Mysore sandalwood, as well as the lightening of the powdery aspects of coumarin and iris, might account for the effect.

Between the different batches I appreciate the original Shalimar in vintage extrait de parfum and parfum de toilette, but I find myself wearing Shalimar Eau Légère by Mathilde Laurent more comfortably, especially in the summer months.

So is Eau de Shalimar that different? The official response by PR official Isabelle Rousseau is categorical: "Je vous informe que la fragrance Eau de Shalimar est la même que Shalimar Eau Légère Parfumée, réalisée par Jean-Paul Guerlain." (ie. I inform you that the Eau de Shalimar fragrance is the same as Shalimar Eau Légère Parfumée, created by Jean Paul Guerlain.) Taking into account that this is the woman who had specified to me when exactly the reformulated batches of Mitsouko Eau de Parfum started circulating (June 2007, for those who missed it), I have no reason to doubt her credibility or sincerity. Still, a miniscule variation might be due to different batches of ingredients.

The bottle of Eau de Shalimar is easy to distinguish among its predecessors: made of transparent glass but in a different colour. The label with the fragrance name is in midnight blue color, while it is enclosed in a white outer box. It is available at major department stores as 50ml (1.7 fl.oz.) of Eau de Toilette.