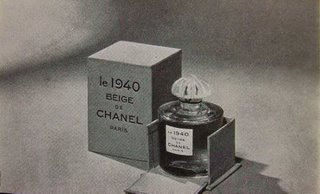 It's uncanny how one comes across the most shocking and astounding news sometimes. Forcing us to interrupt what is a series of posts on something particular even! On hindsight, since I am about to talk about Sycomore by Chanel later on (as it is a vetiver-based scent after all), maybe it isn't that irrelevant as it seemed at first.
But let's revert to how I found out about it. There I was casually reading one of the blogs I visit often, Perfume Posse, and LizS posted this:
"I was jogging by Saks in NYC last night, and they have in the window all the les exclusifs by Chanel. There is a HUGE poster of one called BEIGE. its sitting next to the bottle of Sycomore. New Release?? I can’t find out any info online…has anyone else heard of this? I hadn’t been to Saks this weekend despite seeing the window displays, I guess I didn’t notice the name on the bottle".

Of course Beige by Chanel was one of the rare vintage fragrances that hark back to the days of Gabrielle Chanel herself and formed a holy triad: Rouge, Bleue, Beige. According to Octavian Coifan, fragrance and fashion historian:

"Chanel created in 1929 a very fresh spring collection with dresses in red/blue/beige in jersey (a sport style with stripes and geometric pattern) as depicted in a Vogue review from that year. In the same year Jean Patou launched Le Sien, the "unisex" perfume (chypre) that was inspired also by the sport spirit. Chanel and Patou promoted in those years a day fashion inspired by sports, with geometric patterns and young look. Maybe Chanel wanted to answer Patou's sport perfume (Le Sien = Her's) with her famous colours - red, blue and beige - used in jersey's sport dresses. But those perfumes are also an echo of the French Flag (bleu, blanc, rouge)".

The fragrance itself is described as echoing the composition of No.5 (much like the other two in the triptych do), yet the resulting scent being like a cross between Vol de Nuit and Arpege (which is formidable I bet!). The basic chord seems to be jasmine, orris and amber.

So what is happening? Is Chanel planning on re-introducing their old Beige (and maybe eventually more older compositions) in their Les Exclusifs lineup? Or are they changing the formula enough not to resemble the vintage, very rare juice, like they did with the chic Sycomore? (another defunct Chanel from the days of Mademoiselle). Are Bleu and Rouge next?
And why are they aiming these splurgingly luxurious fragrances at the American audiences first? May I remind you that the equally quitessential house of Guerlain went the same route with their exclusive editions of Cruel Gardénia and Spirituese Double Vanille...which is interesting in terms of marketing, to say the least.
The plot thickens; mark my words!