Structure of a Perfume: What it is, How to Achieve it and the Myth of the Fragrance Pyramid

Consider flipping through a fashion magazine for a minute: Sandwiched between glossy pages of advertising with models in ecstatic surrender to the sheer beauty of any given potion of seduction, you will find editorial guides that teach you that fragrances are classified in olfactory "families" and that they develop like music "chords" into top notes, heart notes and base notes, built into a "fragrance pyramid": maximum volatility* ingredients first; medium-diffusion materials following them after the intial impression vanishes; tenacious, clinging for dear life materials last. That should make it easier, right? Well, not exactly.

The thing is most contemporary fragrances are not built as neatly and the bulk of fragrance descriptors are written with a marketing consideration to begin with. It's not a plot to mislead, but the industry is still shrouded in mystery, offering a rough blueprint rather than an analytical Google map into the largely uncharted terrain of fragrance composition. After all, look what happens with "perfume notes"; we're given the effect in the press material but the real ingredient hiding behind the fragrance note is something else entirely.

So how does one go about it?

The Fragrance Pyramid and Other Myths of Mysterious Structure

Recalling Pharaonic mysteries more than hard science the term "fragrance pyramid" entered the vernacular as a means to educate the public into how perfumes are actually constructed. It was legendary perfumer Jean Carles (Shiaparelli Shocking, Dana's Tabu and Canoe, Miss Dior) who used this stratagem to explain a perfume to an industry outsider. The "fragrance pyramid" concept embodies the classic three-tiered French structure of such great perfumes of yore as Ma Griffe by Carven (another Jean Carles creation) or Bal a Versailles (Desprez), where the denouement reveals distinct phases resembling a 3-D presentation. You get all different angles while the perfume dries down on the skin; a slow, engaging process to an often unexpected end.

Consider too one of the tightest traditional perfume structures, the "chypre" (the name derives from the homonymous archetype perfume by Francois Coty, in turn inspired by the ancient blends from the island of Cyprus, i.e. Chypre in French): a harmonious blend (i.e. an accord) of bergamot (a citrus fruit from the Mediterranean basin), labdanum (a resinous extraction from rockrose) and oakmoss (a lichen from oaks). This compact form, like a musical sonata, has a clear progression of themes, from elegantly sour to resinous/sweet, down to mossy/earthy, but all work together in simultaneous harmony, becoming more than the sum of their parts. On top of this basic skeleton perfumers may add flowers, fruits, grasses or leather notes, giving a twist to this or that direction like a shift to a kaleidoscope; this allows them to flesh out the core's striking bone structure, just like makeup accents luscious lips and expressive eyes over solid jaws and prominent cheekbones.

Not every fragrance is built on the pyramid structure (or the "chypre accord" for that matter), nor is it a foolproof guide of deciphering a perfume's message. Guerlain's Après L'Ondée (1906) plays with the contrast of warm & cool between just two main ingredients: violet and heliotrope; the rest are accessories. 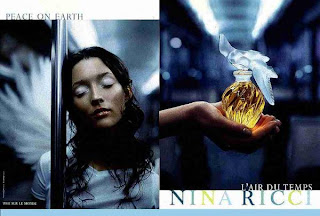 Comparing Guerlain Shalimar (1925), Nina Ricci L'Air du Temps (1948) and Lancôme Trésor (1990) we come across three different styles of composing, of structuring a fragrance: The first is reminiscent of older-style fixation of natural ingredients (lots of bergamot) via the triplet of animal products (civet, an animal secretion), balsamic materials (benzoin, Peru balsam) and sweet elements (vanilla, tonka bean). The second is pyramidal. The third is almost linear, the same tune from start to finish, a powerful message on speakers.

In linear fragrances the effect is comparable to the unison of a Gregorian chant: the typically fresh top seems entirely missing, replaced by trace amounts of intensely powerful materials boosting the character. Lauder's White Linen or Giorgio by Giorgio Beverly Hills are characteristic examples. Sophia Grojsman was in fact the one who introduced this minimalist style with maximalist effect, composing an accord of 4-5 ingredients that comprise almost 80% of the formula (as in Trésor, based on a formula originally made for herself). This accord was then flanked by other materials to provide richness and complexity. Times have changed, fragrance launches have multiplied like Gremlins pushed into the ocean and consumers' attention span has withered to a nanosecond on which to make a buying decision. No wonder contemporary perfumes are specifically constructed to deliver via a short cell-phone texting rather than a Dickens novel published in instalments in a 19th century periodical. Other considerations, such as robot lab compounding, industry restrictions on classical ingredients due to skin sensitising concerns and the minimalist school of thought emerging at the expense of Baroque approaches, leave recent launches with increasingly shorter formulae. But that's not de iuoro bad either. One of the masterpieces of perfumery, Guerlain's Mitsouko, consists of a short formula! A succinct, laconic message.

Some fragrances are built like a contrapuntal Bach piece and others like Shostakovich: Comparing a fragrance by Jean Carles or Edmond Roudnitska with one from Sophia Grojsman or Jean Claude Ellena are two different experiences. That does not mean that contemporary perfumes are devoid of architectural merit. On the contrary. Refined compositions like Osmanthe Yunnan or Ambre Narguilé (both boutique-exclusive Hermès, called Hermessences) showcase the potential of this school. Structure is not only given by arranging the volatility of ingredients. It's how each material plays its delineated role into achieving the overall fragrance. Structure is consolidated by using the requisite materials and ratios to provide what is commonly referred to as "the bones" of a fragrance. Most often these materials happen to be synthetic, because they consist of a single molecule (in contrast a natural, such as rose absolute, can contain hundreds of molecules), they're stable and produce a closely monitored effect in tandem with other dependables.

For instance Grojsman's Trésor uses a staggering 21,4% of Galaxolide, a synthetic "clean"/warm smelling note. Jean Claude Ellena is famous for maxing out the technical advantages of woody-musky ingredient Iso-E Super in his fragrances for structure and diffusion.

In the end structural analysis is for the professionals. The wearer can experience the fragrance linearly, circuitously or languidly; it ultimately depends on his/her sensitivity, perception, attention-span and education.