Etat Libre d'Orange Like This Tilda Swinton: Musing on a Muse 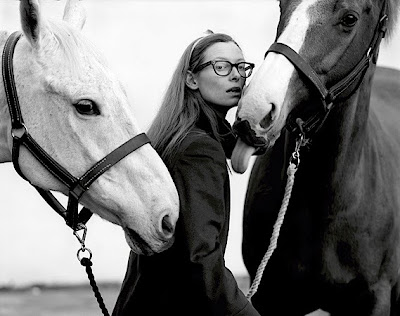 Etat Libre d’Orange, the brand of interesting scents and provocative names, takes on another unusual muse; after Rossy de Palma, the cubist-looking Spanish actress renowned for her work in Almodovar films, the visually striking and fiercely talented Tilda Swinton is their next "muse". The enigmatic, ambiguous, eternally pale and socially provocative actress (living a polyamorous existence in Scotland) broke into the scene with Virgina Woolf's Orlando film adaptation in 1992 never to divert far from our attention span ever again. Even though Tilda is not exactly beautiful (or pretty, in the conventional sense of big eyes, round contours, flowing mane) she is arresting and compelling to watch, making the camera love her. Etat Libre d’Orange dedicates their latest fragrance, inspired by the verse of the Persian poet of the 13th century Rumi and named Like This to Tilda Swinton, rendering the most unexpected "celebrity scent" in a long while. Perhaps the choice wasn't really that unexpected: Several perfume enthusiasts in the online community when asked which celebrity should have their own fragrance mention her name, adding that Etat Libre would do her justice (that remains to be seen, but I am willing to test the theory out!)

So what is it with unusual, non silicone-friendly beauties that could be termed jolie-laide lately? We had noticed the phenomenon when Balenciaga had chosen Charlotte Gainsbourg a while ago for their new violet-laced steely scent Balenciaga Paris. Even though Charlotte, Gainsbourg's daughter by Jane Birkin, has known controversy since infancy (Lemon Incest is a hard act to follow!), somehow her contemporary profile minus Antichrist is rather tame. Her family life, married to director Yvon Attal, is steady, even bourgeois. Tilda on the other hand enjoys a much more controversial profile, a patrician background and her Celtic features and high colouring are unpredictable and more distinctive than Charlotte's. The White Witch part in The Chronicles of Narnia: The Lion, the Witch and the Wardrobe (2005) was plenty memorable.

What is more interesting is that there seems to exist a brave new frontier in fronting fragrances through faces that communicate a certain intelligence (Tilda has been involved in installation art and cutting-edge fashion, notably for Victor & Rolf) and visual bravado. The audience has been tired of mainstream predictability and needs new "flesh". Is it also an indication of feministic streak that re-awakens through a bras-de-fer with the cemented ideals of Hollywood-esque attractiveness? Tilda is a creature of subtle and underground sexuality, which highlights the mystique that fragrance can inspire admirably. And perhaps the female buyers of fragrance long for it to be again -after decades when it was forgotten- a discreet game of mapping their own identity, intelligently and cohesively. In the words of Tilda herself: "I'm basically interested in identity, and I still find fascinating the question, 'How do we identify ourselves, and how do we settle into other people's expectations for our identity?' "

Like This was composed by perfumer Mathilde Bijaoui, including notes of yellow mandarin, ginger, helicrysum (everlasting flower/immortelle), neroli, Grasse rose de Mai, heliotrope, musk and vetiver, as well as the new synthetic Potiron Jungle Essence (Mane laboratories) reinforcing the smell of pumpkin. The word pumkin ~alongside its echolalia and the findings of Dr.Hirsch about its scent augmenting penile blood flow~ makes me giggle a bit when contemplating the polyamorous environment of Tilda. Is this intentional? It would be fun to think that it were!

Like This by Etat Libre d’Orange will be available in Eau de Parfum 50ml and is launching on 13th March 2010.
Photo of Tilda Swinton via papercastlepress.com/blog
*Share with link: Tuesday, March 02, 2010