Wheelbarrow, lay off the whip and don't rush the horses,
you don't need to hurry when you've got your love so close by.
When he smiles, the world smiles at me,
so let the wheel run where it might,
and wherever it goes, it's fine by me. 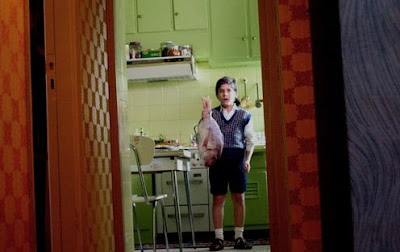 Any mention of Bosphorus, the strait between East and West, uniting and at the same time dividing Constantinople (Istanbul), which lays on both its banks, never fails to ignite a very palpable nostalgia laced with a smattering of pain for any Greek. We're automatically thinking of the failing grandeur of the Paleologi dynasty and lamenting for the times when Greeks and Turks co-existed in peace for centuries in this most cosmopolitan of Eastern cities. Traversée du Bosphore (Crossing the Bosphorus) by L'Artisan Parfumeur, like its namesake strait, was the straw that broke the ~proverbial~ camel's back, as anything referencing the city of Constantine will make me reminiscence yet again of my forebearers and the sweet camaraderie they had to abandond due to political turmoil. But The City, Istanbul, is in reality neither Greek, nor Turkish. It's neither christian nor muslim. It's a cultural border, a place where everything meets and unites, a cauldron of cultures and men; the place which millions of different people, of different nationalities and religions, loved madly through the centuries. A city so beautiful that there was no other way to call it than The City, η Πόλη!

Traversée du Bosphore comes now from Bertrand Duchaufour and L'Artisan Parfumeur as the symbolic strait between modern French perfumery and its oriental heritage. The unisex fragrance was fittingly inspired by a journey to Istanbul, when at the crack of dawn the cobblestone streets still retain their sleepy languor, like heavy-boned odalisques stealing gazes through the lacework wooden panel of the musharabieh, and when the many fishermen set out to catch their day's worth, packing nets, salty sardines and pita bread. You can easily lose yourself promenading unhurriedly through the small alleys towards the seraglio and Kahrié djami with its blue-peacock mosaics, gazing at the narthex's domes for hours or the many fountains where pilgrims ritualistically wash their head and hands before proceeding. It's a slow world, filled with beautiful wistfulness.

The strange thing about Traversée du Bosphore, part of the Travel series in the niche brand's subplot, is how a -by now- cliché concept (i.e.eastern exoticism) that should be a foregone conclusion (loukhoum, tanneries, saffron, milky salep drink, tobacco in hookahs, opulent roses, strange white flowers......hasn't Lutens exhausted that genre?) smells interesting and contemporary; nothing like a heavy odalisque looking through the parapets or Alladin rolled into plies and plies of plush carpets. Instead it's a gouache of a scent: a transparent suede floriental with soft musky notes, a marriage of rosewater and suede.

Indeed, the list of official notes for Traversée du Bosphore reads like a shopping list of things to find in a Turkish souk or at the very least smells encountered around a Turkish souk. The apple-laced çay (tea) is very popular and no one makes it more delicious than Piyer Loti Kahvesi at Eyup (the European side of the city), a stone's throw away from Sultan Ahmet Mosque and the Byzantine apotheosis that is the temple of Aghia Sophia. Loti is the writer of Aziyadé (see the perfume inspired by it) and knew a thing or two about sensual abandon...Tobacco is still smoked in hookahs; not only by old men in derelict coffee-shops, heavy in political talk, but from younger ones as well, when they finally sit down to have an aimless break. Men and women alike buy fresh phyllo pastry, almonds and pistachios to make baklava, and Turkish delight by the pound to bring back at home. The market is filled with golden and red heaps of spices, precious saffron and dried Turkish roses for using as pot-pourri. Tanneries do work merrily (Turkish leathers have competitive prices), although the effluvium isn't anything one would associate with perfume.

But the summation of the notes or the panoramic vol plané shot does not really tell the whole tale: Duchaufour was no stranger to Byzantine formulae, including everything but the kitchen sink before, and the results are diverse: from the baroque patina gold of Jubilation XXV for Amouage to the carnal tryst of Amaranthine for Penhaligon's, all the way to the deceptively diaphanous muddy-incense of Timbuktu for L'Artisan. His compositions include many pathways that lead to a gauze of orientalia.
For Traversée du Bosphore Duchaufour eschewed clichés to come up with a composition that marries on the one hand Anatolian leather (you will only smell grey suede, really, not harsh quinolines; it's comparable to the note in Sonia Rykiel Woman-Not for Men! and Barbara Bui Le Parfum) and on the other hand Turkish Delight (loukhoum), into a unique interpretation of the leather genre; velvety and whispery soft, opening upside down: After the brief apple çay top (blink and you'll miss it!), you sense the suede and only later the powdery loukhoum accord.
The strangely greyish powderiness of iris dusts the notes like white copra dust enrobes the small rose-laced loukhoum cubes, while saffron with its leathery bitterish facets reinforces the impression and balances the sweeter notes, much like it kept vanilla in check in Saffran Troublant. The iris-leather accord in Traversée du Bosphore weaves a whispery path together with a hint of almond giving a light gourmand nod. The whole smells like rosewater sweets wrapped in a suede pouch, never surupy and very skin-scent like (incorporating that Havana Vanille base), although a tad more flowery feminine than most men would feel comfortable with. It's a fragrance which smells nice and simple like a nostalgic song from an old movie which dies down to a murmur, and might demand your attention to catch the smaller nuances.

As for me I know well that the past is inextricably tied to the future, and revel in thinking of Istanbul as the pathway where cultures and people will eternally meet...and part.

For our readers a draw: one sample to a lucky commenter. Draw is now closed, thank you!
Tell us where you would envision the next travel series by L'Artisan should take us.

The bottom music clip and the film stills come from the Greek 2003 film Πολίτικη Κουζίνα/A Touch of Spice by Tasos Boulmetis, starring George Corraface and exploring the culinary philosophy that maps the course of modern Istanbul and the fateful, doomed romance between a Greek boy and a Turkish girl before the deportation of Greeks in 1964. It's uploaded in its entirety with English subtitles on Youtube: the first part is on this link and you can take it from there. Happy watching!
*Share with link: Thursday, January 13, 2011