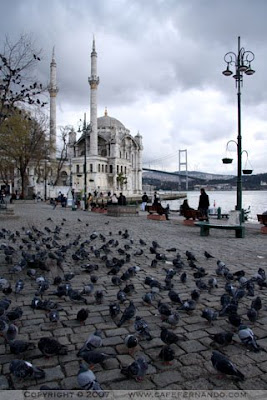 "The ghosts return at night, little lights for unredeemed souls
And if you gaze up at the barricades, you’ll see figures looking back at you
And it’s then that a complaint wanders you through the cobblestone alleys
Of Constantinople, a lover from yore, whom you find in someone else’s embrace".

Travel Memoirs begins with one of the most sensuous destinations: Istanbul ~the Ottoman name under which the former capital of the Byzantine Empire, Constantinople, is known today.
Initially the city was named after the Roman emperor Constantine the Great who made it Nova Roma, over the site of the ancient Greek colony founded by Megara citizens simply named Byzantium. Yet the name Istanbul itself is based on the common Greek usage of referring to Constantinople simply as “The City”, because it was the crown jewel of medieval cities with a population and grandeur that exceeded many western European cities, such as London, Paris and Rome, for centuries. It derives from the phrase "εις την Πόλιν" or "στην Πόλη" {(i)stimboli(n)}, both meaning "in the city" or "to the city".

And it is no surprise that in an Empire whose majority of the population was Greek or speaking Greek, there is still a strong Greek element running through the fabric of memory when one sets foot on Istanbul’s soil. But the Ottoman heritage is none the less interesting to witness: minarets and mosques, majestic palaces, bazaars, carpet dealers and salep sellers on the street peppered with excellent cuisine and suggestive dancing render the visitor captive of its charms. It’s this fusion between Occidental and Oriental that gives Istanbul its extraordinary character. A character of strange melancholy: perhaps it’s the ancestral call…

Passing through the arabesque cobblestone on Istiklal across from the fish market, one enters the Cukurcuma district, full of antique shops, lazy cats sunning their bellies and the aroma of slowly roasted, dark coffee on hot sand, Turkish coffee (Türk kahvesi), made the traditional way. The preparation begins by boiling finely powdered roast coffee beans in a copper ibrik, the shape of a tiny ewer, with the addition of cardamom and (optionally) sugar. The thick liquid boils and boils again ceremoniously, emitting the aroma beyond the scope of the little terraces where it is served. Made one cup (fildžan) at a time, where the dregs settle and a thick golden cream forms on top, the köpük, it is a process of slow anticipation, a largo of animation. And also a journey into the past and the future. In this small fildžan I can almost glimpse the Levantine Arabs bringing the fruit of coffea bush to Constantinople. The Ottoman chronicler İbrahim Peçevi reports the opening of the first coffeehouse in İstanbul:

“Until the year 962 (1554-55), in the High, God-Guarded city of Constantinople, as well as in Ottoman lands generally, coffee and coffeehouses did not exist. About that year, a fellow called Hakam from Aleppo and a wag called Shams from Damascus, came to the city: they each opened a large shop in the district called Tahtalkala, and began to purvey coffee.”

But I can also forsee the future: those sludgy grounds left at the bottom serve for tasseography, an old tradition of fortune telling. The cup is turned onto the saucer and the symbols formed are deciphered by some older woman.The flavour of cardamom and sometimes kakule (pistachio grains whole seed "pods", pistachio-looking like of the cardamom plant) settles in the mouth, lingering for a long time, like the prophecies revealed by the symbols on the cup. “Will they ever come true?”, one wonders gallivanting through the medieval alleys.

In Kapali Carci (the Grand Bazaar with the 1000 shops) one comes across all kinds of scented products. Fragrant balms for the hair, henna paste for body and hair, oils of rare plants and fossilised resins, like lumps of gum benjamin (benzoin), Turkish sweetgum (Liquidabar orientalis) and all the spices of Arabia. If one persists there are manuscripts, or should I say copies of old manuscripts posing as older than they are, with recipes using them. One of them is "Theriaca Andromachi Senioris", a Venice treacle recipe that uses benzoin appearing in the 1686 d'Amsterdammer Apotheek, a honey- or molasses-based alexipharmic composition once thought to be effective against venom. First developed in Italy, then exported throughout Europe from Venice and ending in Constantinople. If only the offered manuscript were authentic…

And of course there is Anatolian rose Otto (from Ottoman) which leaves an intense trail of almost fruity scent to one’s hands after handling the precious little bottles, with the name Gül (Rose) written on the label. I try to recall if any commercial fragrance captures the intense, decadent and yet also fresh odour of such an essence and come up with none. One is hard pressed not to haggle with the local sellers who are expecting so and the little treasure is secured into a handbag, folded with a silk handkerchief depicting seagulls. It will linger in a drawer with old, frayed photos of ancestors, impregnating their precious memory with the essence of the place they begrudgingly had to leave.

Pic shows Ortaköy Mosque (officially Büyük Mecidiye Camii, the Grand Imperial Mosque of Sultan Abdülmecid) and the Bosphorus Bridge by cafefernando.com.
Translation of lyrics by the author.
Clip from the intro of Greek-Turkish film Politiki Kouzina, uploaded on Youtube by JasonSeaman1.
*Share with link: Monday, March 17, 2008