Of all the spice notes, saffron with its bittersweet flavor is the one most opulently and oneirically represented in compositions that are highlighting its antithetical facets: sweet and leathery, acrid and rich. The impact is based on its inherent strong contrasts and juxtapositions, yet the aroma itself possesses a polished delicacy that distinguishs it amidst the concucopia of other gourmand or spicy scents. Here are some of the fragrances best highlighting saffron and its golden glory.

Safran Troublant by L'Artisan Parfumeur
In India it is customary to aromatize rice pudding with saffron stamens soaked in the milk used to make it. This composition by Olivia Giacobetti goes for the warm, pleasantly sweet facet of saffron imbued with the softness of vanilla and milky sandalwood. The simple and cozy aromatic mélange is brought to the boil by the addition of a slightly cumin-like note (although none is listed), raisin and rosewater. The Indian feast is closing with a decadent, sensuous dessert (with ambery undertones, slightly powdery accents) that doesn't stick around for long yet makes you appreciate the fact that here is where Kama (the art of love) was born. 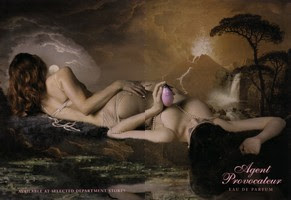 Agent Provocateur by Agent ProvocateurWhen this fragrance first launched in 2000 in its ostrich-egg-sized pink bottle, little did one expect that the scent within would be atavitistic to the lineage of impressionable floral chypres of yore. The big Moroccan rose in its heart, much like in classic Jean Couturier's Coriandre from the 1970s, is complimented by a paper-y woody note of amber and vetiver combined with warm musks, but it is the saffron along with the upbeat coriander that bring a rather animalic and weirdly "dirty" quality to the fragrance making it the olfactory equivalent of an aged Hollywood star the morning after she has had a rampant night in bed with a nostalgizing fan half her years.

Al Nabha by Haramain
If Thaif rose mixed with Dehnal Oudh is your dream come true, then you will be well catered for with this exotic, musty mix of both these ancient aromas of the East recommended for men. Dehnal Oudh supposedly aids motivation and meditation as it brings communication with the transcendent and invokes a sense of strength and peace; but I find that it is the saffron accent that touches the earth with its juxtaposition of earthy delights to the spiritual ones of oudh. I feel that it is the perfect companion to studious winter solitude.
(if you want to find a dehnal oudh distributor in the West, try this link)

Black Tie by Washington Tremlett
The bold saffron note is brought into culmination through the combination with other spices and herbs (cardamom, sage and galbanum). The rose-geranium heart is effortlesly elegant, backed up by a woody vetiver-rich undercurrent that likens it to the husky-voiced Czech & Speake's No.88; yet the former's aura is quiter, more refined and the spice accents make it intriguing enough to render it unique in the current masculine selection; and very fitting to be worn by women as well!

Cuir de Lancome (re-issue)
The at once dense and soft aroma of quality suede is complimented admirably by the inherently leathery aspects of saffron, yet the whole is immersed in the translucence that precious labradorite possesses thanks to hesperidic touches of sweet mandarin and elegantly acrid bergamot. Perfumers Calice Becker and Pauline Zanoni have managed to make a reformulation that defies the disdain usually reserved for the former in that it succeeds to smell enticing and worthy of acquisition even if you are a fan of the vintage version.

Evening Edged in Gold by Ineke
Independent perfumer Ineke Ruhland has been creating a line of fragrances that follow the alphabet, as we mentioned while starting the ABCs with After my Own Heart. Evening Edged in Gold is the fifth in the series and although it has been praised for its rendering of exotic sweet and narcotic blossoms ~like Angel's Trumpet and suede-apricoty osmanthus~ via a stop at a perverse candy-story out of Alice in Wonderland, it is perhaps the bittersweet tang of saffron that holds it from becoming intoxicating to the point of no return, reminding me of the Maldon sea salt chocolate from the Paul A. Young chocolaterie in London.

Idole de Lubin
A pirate idea of boozy rum in a walnut-shell deep within a big leather sac, like a hidden treasure in the depths of some uncharted sea. Olivia Giacobetti had a streak of uncharacteristic epiphany: density in the playground of Safran Troublant, her other saffron scent. More masculine, less vanillic and cozy, Idole has sparkling facets of sweet spirits along with the lusciously dark, dry leathery and animalic background. If I truly loved amber fragrances some more, this could have been my companion on the snowy mountaintops of Kaimaktsalan while sipping saffron-infused black tea.

Opôné by Diptyque
Although I have never personally managed to wear this successfully and my decant has been relegated to the swap list, I find that the saffron and rose accord is potently showcased here for those who do not have access to the spice itself for educational purposes. Pot-pouri like, with rich damascones and damascenones ingredients, and rather dusty, Opôné was named after an ancient trade center in Somalia on the east coast of Africa, but this is a travel I would personally rather take on another medium.

Comme des Garçons 2 Man by Comme des Garçons
Composed by Marc Buxton in 2004 for Rei Kawakubo's brand of avant-garde tailoring, the fragrance has such radiance and clarity that the warm, smoky ambience never becomes the low-life den it could have been and even the incense does not veer it into the mystical; instead it remains suave and polished. The cumin, wood and vetiver elements compliment saffron in a masculine clarion to battle for the urbanized battlefield rather than muddy Bannockburn and I personally find that the modern warrior who would wear this one would definitely manage to steal a gaze of contemplation and interest from me.

Ta'if by Ormonde Jayne
Dates and pink pepper combine with golden saffron to evoke a stop on the way on the Silk Route with the slight green tinge of dampness of fallen leaves in a desert oasis. The unusual note of broom reminds me of the comparable treatment in Dior's forgotten marine-oriental Dune. More spicy than fruity, but with a clearly detectable honey rose heart that blooms lusciously in the warm air of a summery evening, Ta'if is one of the Ormonde Jayne fragrances that although I don't often wear I admire a lot and prefer to the rather lesser Orris Noir which also includes saffron.