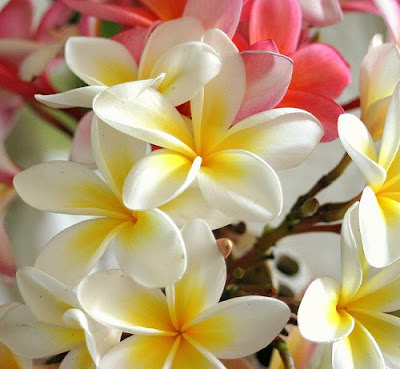 Three bottles were donated to Rumble in the Jungle Gala, organized by Friends of Bloedel on January 30th, 2010.
The Story of Frangipanni Gloves:
Ayala Sender, chief perfumer and founder of Ayala Moriel Parfums, tells how the perfume came to be: "It was one of those indecisive April days, alternating between cloudy and warm, and pouring rain. For a while, I sought refuge inside the glass dome that housed tropical birds & flowers, and that's where I found a blooming fangipani tree in Vancouver for the first time". It is thanks to this tropical gem at the heart of Vancouver that Ayala was able to find a real, living frangipanni flower for reference, and was able to recreate the scent of fragipani flowers using pure botanical essences.
Frangipanni Gloves* is a perfume that layers a whiff of frangipanni flowers with the leathery-powdery undertones of suede perfumed gloves of Victorian era. This tropical white floral perfume has an intoxicating yet delicate aroma, sweet and humid, underlined with suede-leather nuances and a hint of spice.
The City of Vancouver has cut its funding to sustain the conservatory and it is scheduled to close March 1st, 2010. This will leave tens of tropical birds and plants homeless, and is a huge loss for the people of Vancouver! Proceeds from sales of Frangipanni Gloves go to the Bloedel Floral Conservatory in Queen Elizabeth Park in Vancouver: When you purchase Frangipanni Gloves (click the link) you are also helping this cause: Ayala will be donating $50 for every 9ml bottle and $30 for each mini bottle to the conservatory in hopes that it will prevent it from shutting down, so that you too can enjoy the scent of the living frangipanni flowers.

* "Frangipanni" was a name of a mid 19th century Italian marquis who invented the method to perfume gloves. The Frangipanni gloves were soft suede gloves and became very popular among aristocrats in Victorian times. They were scented with a blend of various spices, flowers and roots (orris, jasmine among others) . It was only later on that the flower with the same scent (Plumeria alba) was discovered in the South America by Franciscan traveller Charles Plumier.