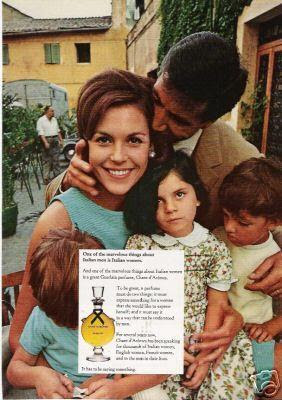 Chant d’Arômes was created in 1962 by young Jean Paul Guerlain for his future wife, who was so loyal to her favorite Ma Griffe by Carven that she didn't wear any of the fragrances of the house her fiancé was about to inherit! In a getting even roundabout way, Jean Paul created this peachy, lactonic, floral chypre to lure her into wearing a Guerlain and thus made his first foray into the illustrious line of creations of the historical house.
Erroneously translated as "Language of Flowers" sometimes, its French name in fact has the elegiac meaning of "Song of Aromas" which beautifully echoes its oneiric musical cadenzas.

The translucent opening of Chant d’Arômes ~with what seems like a dash of mandarin~ is not unlike the older version of Ma Griffe which was much brighter due to lots of bergamot and aldehydes or Chanel No.22 with its incense touch, lending a sparkling and intriguing character to the composition. It very soon melts into the embrace of the undecalactone of peach skin ~soft, fuzzy and completely mesmerising; tender like the hand of a mother, loving like the gaze of a lover in the first throes of romance. The flowers are all subdued and well blended into a medley of harmonious arpeggios, revealing little hints of this or that at the most unexpected turns, never heady, never loud. Through it all, there sings the brassy contralto of cinnamon, accountable to benzoin, but also reminiscent of the styrax ambience of vintage Ma Griffe's drydown. You would be hard pressed to distinguish any single ingredient as they all sing together with the smoothness of a choir performing Pachelbel's Canon in D; optimistic, lightly sweet, but with the slightest mossy autumnal background, a debt to the unsurpassable Vol de Nuit.
And yet Chant d’Arômes does not aim to be a link in the Guerlain chain, but making a fresh, ever young start it takes us into the realm of the eternally sunny. Although officially classified as a chypre floral by Guerlain, I find that its chypré qualities do not make it difficult, but on the contrary it serves as the perfect choice between floral and chypre for those who do not like the extremes of either category. Its innocence fondles the mystery of youth.

According to Luca Turin in Perfumes, the Guide, it got reformulated in the early 90s to an aldehydic floral of less distinguished nuances, but it has reverted to almost full its peachy glory in 2007 in the famous bee bottles.
Extrait de Parfum was discontinued at one point but is now available at the Paris flagship boutique in Les Parisiennes line; worth pursueing for those who find that the Eau de Toilette lacks the desired staying power.
I have found that the latter performs much better in the sunny and warm weather it naturally evokes, rather than the colder days of the year, and it never fails to put me in a bright and happy mood no matter what might have intervened.