"As cruel as the typical degenerate Derby winner", the lithe, tall redhead is standing in the centre of the room with her Edwardian silk drapped dress and her fairly modern views, which she airs freely, to wreck havoc with whom she targets.

Her venomous lines are nevertheless obliterated by her stunning physique and as she dangles her cigarette-holder with the bored air of a person whose existence is oblivious to the Great War around her, you catch yourself having your eyes hooked by  the corners of her full rosy lips in anticipation of her passing her tongue over them to draw a wet line that glistens from across the room. That's Sylvia "pulling the bath strings" and she masters the game.

Sentiers de Cometes by parfums YeYe is suffusing this scenery and this heroine with its emancipated vampish touch to a T. Its bright opening of vivid citrus followed by the more complicated silkiness of floral essences caressed by tonka beans is a glimpse into an orientalised salon, the kind we don't see anymore unless it belongs to a sinophile.
Not dangerous unless manipulated to be, nor innocent to be sure, Sentiers de Cometes is a fragrance that makes one yearn for the days when you could put a jewelled band on your forehead and some marabou feathers on your shoulder and descend to dinner. I miss that kind of glamour even if I never lived through it. 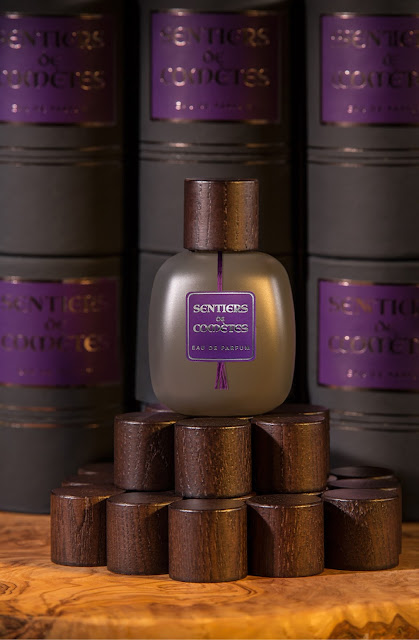 The YeYe Parfums brand was founded in 2007, initially focusing on Home Fragrances: Diffusers and Candles and has acquired a loyal following since. The brand's first personal fragrances were introduced in 2015 a trio of artisanal scents. Ryan York, Creative Director & Co-Founder and Ernesto Sanchez Bujanda, In-House Perfumer & Co-Founder are behind the brand.The simple but beautiful bottles featured a wooden cap and a tasselled label.
*Share with link: Saturday, October 22, 2016