Malle and Benaim Lecture at Harvard Graduate School of Design 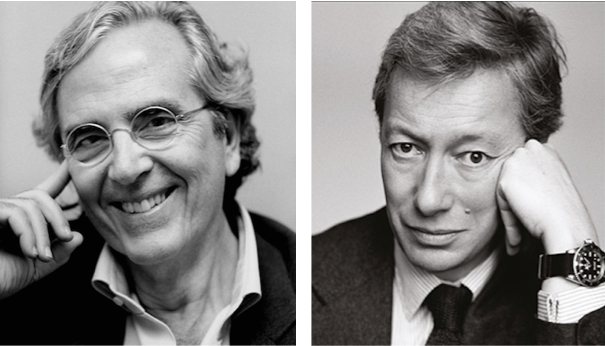 Frédéric Malle will speak about design, the creative process, the fragrances themselves, and their ingredients and history, joined in conversation by perfumer Carlos Benaïm.

Carlos Benaïm (left image) spent his childhood in Tangier, close to natural ingredients that gave him a taste for beauty. He later trained under legendary American perfumer Ernest Shiftan, where he instilled a boldness and bravado into his creations.

Frédéric Malle (right image) was born in Paris into a family deeply involved in perfume and the arts, including his grandfather, who worked closely with Dior to create Parfums Christian Dior; his mother, who was art director of the Dior house of fragrance; and his uncle, the film director Louis Malle. After studying art history at NYU, seeking to master every aspect of the perfume trade, Frédéric Malle worked at French ad agency Havas International and at fragrance lab Roure under master perfumer Jean Amic before establishing Editions de Parfums Frédéric Malle in Paris in 2000, which soon expanded to department stores and stand-alone boutiques in New York, Rome, and London.

Rejecting the norms of mass produced fragrance, seeking a return to luxury and creativity, Malle has kept his company on a carefully controlled scale in order to empower the fragrance creators while offering the customer an exceptional experience. He has developed his fragrances through collaborations with well-known master perfumers of today, including Dominique Ropion, Jean-Claude Ellena, Maurice Roucel, Olivia Giacobetti, Pierre Bourdon, Edmond Roudnitska, and (son) Michel Roudnitska.

Malle regards fragrance creation as analogous to publishing a book, with the nose as the author, the name of the fragrance as the title, and himself as editor in chief. This metaphor inspired the sophisticated yet restrained brand identity of Editions de Parfums. His shop interiors—including the Greenwich Village store designed with architect Steven Holl—include Malle's own invention: the "smelling column" that first appeared in the boutique in Barney's New York, which allow a customer to experience the scent and appreciate its complexity in isolation from the surrounding air.

For accessibility accommodations, please contact the events office in advance at events AT gsd.harvard.edu or call (617) 496-2414.