Patricia de Nicolai is repositioning themselves (the new bottles being one of the hints), if intimations are any indication, and no luxury niche brand today is complete without a generous helping of the infamous oud perfume ingredient. Not that there were any audible borborygmi coming from our collective perfumista stomachs craving oud, but apparently a boy or a girl can never have too much oud; or so the aroma producing companies would make us believe. Amber Oud by de Nicolai however is oud prowling in kitten's paws, so delicate and purring you might be mistaken for thinking there is some problem with the labeling. Because Amber Oud is mostly a glorious aromatic amber fragrance with copious helpings of premium grade lavender fanned on resinous, plush notes of velvet.


The combination of amber (a 19th century trope resting on labdanum & vanillin) with oud/aloeswood is not unknown to niche or Arabian-inspired perfumes; if only in name, both Diptyque and by Kilian have utilized this blend to good effect (there's also the Rasashi and Arabian Oud brands). The nutty and musty character of the modern oud/aoud/oudh bases with their Band-Aid vibe is very well tempered by a tried & true combination that somewhat sweetens the bitterness of oud and renders it more Westernized and silky to the touch. Tonka bean and lavender is also "a marriage of true minds". This 2 by 4 is played like a quartet that produces a single harmony. 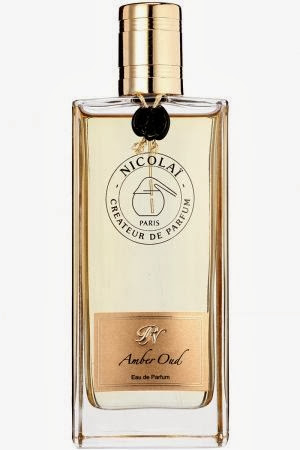 In Patricia de Nicolai's Amber Oud the blast of lavender at the beginning is the dominant force which takes you by surprise and which might make women think this is more men's gear than girly girl stuff. But they need not fear. Gents and ladies alike will appreciate the seamless procession into a balsamic smelling nucleus. The inclusion of sage is beautifully erogenous, recalling human bodies in sweat, cleverly juxtaposed with the washed brightness of the lavender and the camphorous hint of patchouli. Seekers of oud (lured by the name) might feel cheated and there is no eye-catching innovativeness in the formula itself, but de Nicolai is continuing on a path of wearable, presentable, smooth perfumes that have earned her brand a steady following.