What do we know of India really? Its people say सत्यमेव जयते (i.e. truth alone triumphs), a motto inscribed in all local currency, but to our western mind this vast country is a tapestry of so colorful a thread and such intricate a yearn that it is almost impossible to exhaust it if one had two lifetimes over to do so. Bombay Bling! by Neela Vermeire Créations aims to give us a glimpse of this tapestry. Testing it I was expecting to savor this complexity; to paraphrase Dracula addressing Harker before coming to London, I so longed to go through the crowded streets of your mighty Bombay, to be in the midst of the whirl and the rush of humanity, to share its life, its changes, its deaths. The fragrance didn't disappoint. On the contrary. It rekindled the desire to go to India again, to merge myself with it. 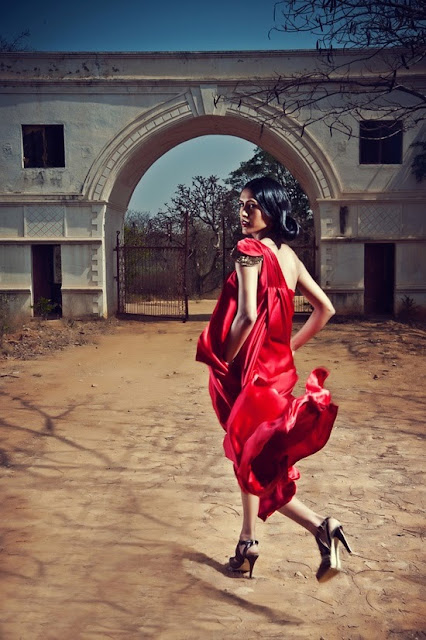 
Bombay Bling! by Neela Vermeire is meant to fuse the dichotomy of India: the advances of the economic world and the colorful culture. The underbelly of the big city combined with the glitter of Bollywood on the vast sandy stretches of Juhu beach and the Queen’s necklace. Fortunes made and lost on the Bombay stock exchange and gambling dens of Mumbai. Beyond the Deccan plateau's archeological ruins...a figurative arm's length beyond the place where Alexander the Great wept, his fate, glory and dreams behind him, before him only the sea...where the cenotaphs of rajputs of Jaisalmer lie... there, in that still shrouded land a giant is stretching its legs and testing its strength; India. An exuberant fragrance, Bombay Bling! takes as a point of departure the mingling of tart, juicy fruits (an unripe mango veering into citrusy tang) squirted over lush flowers of the subcontinent and underscored with a humming woody backdrop. The deep, earthy sweetness of patchouli leaves blends with the banana note of the ylang. Brown sugar and cumin-like intimacy, like when you're smelling a lover's sweat, dripping on sandalwood chippings; milky, soft drydown, yet radiant and fun loving, like a lime and paprika dish with a side of mango chutney. Above all Bombay Bling! is optimism in a bottle!

Bombay Bling! is part of the original trio of fragrances issued by Neela Vermeire Créations which also includes Trayee and Mohur (the fourth instalment, Ashoka, is launching soon). These Indian inspired perfumes, like Chants of India, draw upon the tradition, history and cultural milieu of that vast Eastern sub-continent in which Neela herself has roots. These are truly "transparent orientals", modern and wearable, and therefore it comes as no surprise that Neela commissioned Bertrand Duchaufour to compose them for her niche line.

They are all satisfying tenacious and project with varying force, with Trayee the most introverted and Bombay Bling the most extroverted. Their trail is delicious, creating a lasting impression.

The song is of course originally from film Mother India (music by Ali Naushad Saab) but this is a very popular Greek-lyric version called "My poor heart, how can you bear it" (lyrics written in the 1960s by Demetris Goutis) hereby sung by Eleni Vitali. A small token of appreciation of one people to another...

Disclosure: I was a sample by Neela.