Guerlain gives us a vacant eye zombie. Like Natalia Vodianova's baby blues look empty and not quite there in sepia pictures, lacking the density , the pathos, the slicing through paper that darker eyes carry, yet those vacant blues carry their own strange allure, Shalimar Parfum Initial L'Eau is a very pretty thing posing in a company that it probably shouldn't be among. Taken individually, it is a soft, enveloping, delicate scent of fairies. Taken as a member in the Shalimar company, it's too baby-ish to be taken seriously. 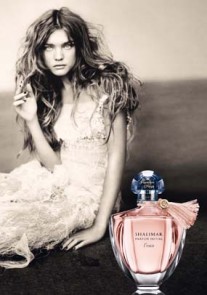 The commercially successful experiment of Shalimar Parfum Initial (2011), an introductory Shalimar for those consumers who knew the brand through their cosmetics &  skincare or for the young clientele that always associated the classic Shalimar with older generations and longed for a version to claim their own (see also Shalimar Eau Legere/Shalimar Light and Eau de Shalimar for previous efforts into this arena), gave us hope. For 2012 Guerlain, as we had early on announced, was bent on launching a flanker to the modernised Shalimar Parfum Initial version (a flanker to a flanker, if you like) this spring, called Shalimar Initial L'Eau.  Now,  this is exactly why I usually tend to dislike the concept of flankers: it's so easy to lose track or confuse things, ending up discussing a completely different thing than your fellow partner in the discussion.

Shalimar Initial L'Eau is both a lighter and drier new formula on the previous experiment, not just a different concentration or a new bottle edition (Shalimar in general knows more limited editions than it can possibly count). The bottle is the exact same style as Shalimar Parfum Initial, only in a lighter hue with a baby pink ribbon on the neck (instead of a greyish blue one) bearing the familiar G medaillon. The similarity leads me to believe that they do intend to keep this version in the line as just a different concentration of the Parfum Initial, not only a one-time-thing limited edition. Especially if it proves a good seller.


Perfumer Thierry Wasser was put on record saying he chose a specific grade of bergamot from a Guerlain communelle (i.e. a special reserve that Guerlain keeps for each of their famous ingredients) which is a tad greener and zestier than usual. What is most distinguishable however, smelling the finished fragrance, is a premium grade neroli which gives a subtle, refreshing tonality, lightening the formula considerably and further making it fluffy and airy. If Shalimar Parfum Initial is a watercolour, this is a rinse.
Despite the mentioned notes of "greenery" in the official press release, such as lily of the valley, freesia and hyacinth, the vividness of the bright citrus notes with a lightly sweet aspect is what stays with you.
The new spin doesn't really boost the green freshness (like that in Miss Dior Chérie L'Eau) but focuses on the neroli essence and a tart grapefruit top note to counterpoint the traditional carnality of the original base of Shalimar (built on opoponax resin, all powdery splendour, Peru balsam and benzoin with their rich, treackly aspect and quinolines with their leathery, sharp, disturbing bite).
Instead the leathery note in Shalimar Parfum Initial L'Eau has been further toned down than it was in the Initial (annihilated you could argue) substituted by an admittedly delicious crème brûlée note. Overall we're witnesses to the deliberate culling of the balsamic aspect that makes Shalimar so famous and recognisable.  This leaves us with a spectre; a fascinating apparition amidst the shadows, blink and you'll miss its ethereal form, but is it related to Shalimar of old? No, it's not.


What I find most surprising for a Shalimar version is the relative lack of tenacity and sufficient projection: three generous spritzes on my arm (catching my trench-coat sleeve too)  have lasted just 4 hours and no one but myself was aware of the fact that I was wearing perfume. For an eau de toilette concentration it's not totally unusual, but for Guerlain and for a flanker in that iconic oriental stable it is most peculiar.