Much as I was predisposed to at least enjoy the unashamedly girly Idylle Duet and dislike the sanctimonious (I thought) Shalimar Parfum Initial, both new releases by the historic house of Guerlain, the perfume gods tipped the scales off and landed me into a case of reverse hubris: I found myself being quite lukewarm on the former, while enjoying very much the latter! How's that for irony? 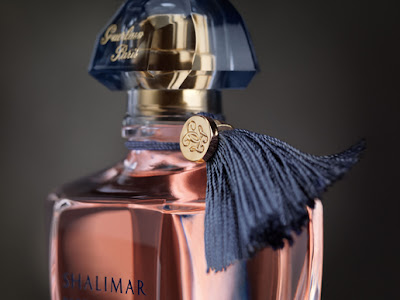 Indeed Shalimar Parfum Initial, credited to perfumer Thierry Wasser as well, is in almost an unrecognisable style to the other feminine release of this year: rich, satisfying, with a smoothly polished texture like silk moiré, it bears little relation to the anaemic and maudlin composition of Idylle Duet. A sufficient dose of healthy scepticism had struck me like a ton of bricks upon setting eyes on the press release images of the new flanker to the iconic Shalimar: a pink Shalimar, for Christ's sake? Isn't anything sacred? My eyebrows were reaching the roots of my hair in exasperation! But upon testing the actual jus on my skin and letting the blotters, lavishly soaked with it,  on my desk for some days I realised that, corny as it might sound, we're not to judge a book by its cover. Shalimar Parfum Initial is the brave, valiant and well-crafted effort of Wasser and Guerlain to present the house with their own Eau Première, much like Chanel did with their own numeric monstre. After all, much of Guerlain's prestige resides indeed with such venerable classics as Mitsouko and Shalimar.So, what's wrong with "Mon Premier Shalimar", the tagline for this flanker fragrance, assuming the juice is good? Absolutely nothing, that's what.

From a marketing angle, everything is set for success with Shalimar Parfum Initial, aiming at the target Guerlain is so keen on attracting, the fashionable 20-something to 30-something woman with money to spare: The warm pink-fleshy tint of the liquid is familiar to consumers of fruity and gourmand perfumes, attracting them by the token that the colour of the juice is indicative of something more than just a pretty shade. The boosting of citrusy notes up top (the synthetic bergamot is not wildly different than the one used in the reformulated classic, yet it smells more vivid and more vibrant here) give the necessary "freshness" that is a sine qua non for modern audiences. The lush vanilla and tonka ensure that the trademark sultriness of the seductive original is not lost nevertheless.
The beautiful bottle (much sleeker in real life than in images) is tactile, friendly, yet imposing too; its deep blue cap with a tiny ribbon attached an homage to the classic design but also a pretty object that presents itself as something novel. Naked Natalia Vodianova posing in the advertisements of the perfume, shot by Paolo Roversi, is testament to the fact that both men and women stop to stare (and occasionally ogle) at a beautiful supermodel who promises sex at the wink of an otherwise nubile eye.All boxes checked for the marketing team, thank you very much!

The composition of Shalimar Parfum Initial focuses on a precarious balance: the standard oriental accord of bergamot and vanilla is fused with zesty orangeyand light notes which "lift" the base up much like Shalimar Light did with its lemon cupcake opening modernising the old standby admired on grandmas and mamas, but shyed away from my the daughters. Still, what would Shalimar be without the come hither? Guerlain quotes rose petals and jasmine for the floral elements, but it's essential to note that should you be searching for florals, you should look elsewhere: this is a wonderful and wonderfully oriental specimen with little flowery prose; all heaving, all sighing, with the seductive warmth of tonka beans (rich in the cut grass and hay note of coumarin) and of rich, caramelic vanilla pods on woods and what seems like the resinous opoponax. The addition of fresh, warm and sweetish white musk is something that would be polarising for the standard perfumista in search of more complex, "dirtier" musk, but the growling part is transmitted through the low hum of the smoky base that is as animalistically seductive as a rutting beast, just hiding beneath the subtle eroticism promised by the top notes. If I were to find a fault with Shalimar Parfum Initial it is that in essence it is no less than the 4th re-twinkinling of the tried & true Shalimar Light Eau Legere recipe in search of a frontman presenting it to the public now that Jean Paul Guerlain is exiled from his own house... 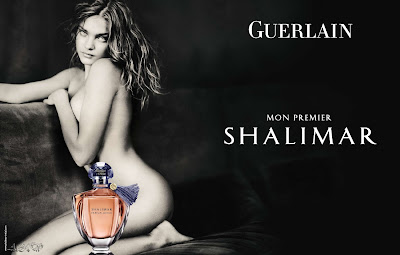 
The music in the commercial clip is Initials BB by Serge Gainsbourg.
*Share with link: Tuesday, May 17, 2011