In a move that recalls Serge Lutens (and his own Fourreau Noir), Guerlain is issuing another "version" of the mythical Shalimar creation from 1925, right after they issued an introductory flanker with their Shalimar Parfum Initial; it's now time for  Shalimar Fourreau du Soir. (pronounced Foo-roh dee swahr, "evening seath/ evening dress") According to Guerlain: "This stunning one time edition makes wearing Shalimar even more irresisitable. The lace print and the leather butterfly are both features from the roaring twenties, the era of Shalimar".The inspiration comes from a true story: Madame Guerlain wearing an evening dress in lace abord the liner Normandie and an unforgettable perfume that stirred the senses and made everyone hanker after the new scent: Shalimar.
The new perfume edition is targeting the Christmas gifts market and will launch October 2011. 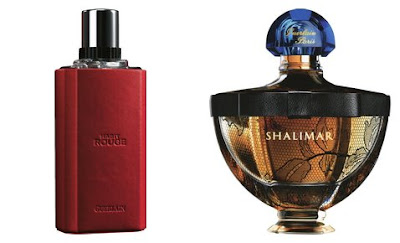 Men will not remain uncatered for, in the realm of Guerlain limited editions for Christmas gift giving. The classic Habit Rouge (in many ways the men's Shalimar) will be encased in a robe of leather (habit de cuir), as depicted.
Habit Rouge Habit de Cuir is also launching in October 2011.

Nota bene: Both fragrances inside remain the same as currently circulating (in the case of Shalimar that means the recently reformulated juice).