‘Now come’, thought Lucile, ‘he’s only holding my hand as we cross the park. It’s spring, no need to worry. I’m not sixteen any more’. But her heart beat wildly. She felt the blood drain from her face and her hands, and rush to her throat, choking her ... Son Coeur bat la chamade.
―Françoise Sagan, “La chamade” (1965), excerpt taken from “Perfume Legends: French Feminine Fragrances” by Michael Edwards (1999)
~By guest writer AlbertCAN 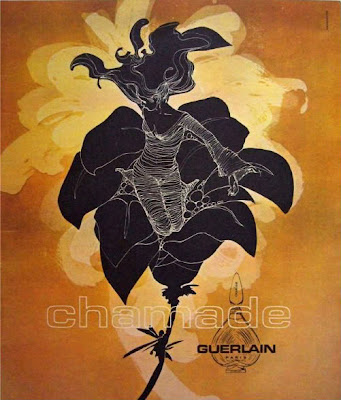 
(Military) A signal or an army’s surrender during battle, usually by drum or trumpet

[from French, from Portuguese chamada, from chamar to call, from Latin clamāre]


The heart perhaps is the most impossible of all. The untamed is virtually untouchable by a sound mind, marching to its drum beat, questing for only its desires. Logics and perspectives may temporarily girdle its mad gallop, only to let it rampant again once passion reigns supreme. Often mankind speaks of progress and civilization, how the likes of smallpox or polio are either eradicated or nearly so from the face of the earth. Yet no modern physician can ever cure a broken heart―and the latest gamut of anti-depressants only address the brain’s chemical balance―nor any vaccine can successfully prevent one from falling in love with the wrong person. Caesars and czars may come and go, inciting awes and fears with the might of the day, but the hardest thing to govern, as shown time after time, is still the heart.

Nowadays one need not to venture far to see the modern casualties of the heart: tabloid newspapers or gossip standards shall be evident of our fascination of its unpredictability, ranging from the latest indiscretion of the Hollywood stars du jour to the myriad of advice columnists dispensing hope to the unrequited. Or the plain crimes of passion, a plead of temporary insanity that allows one to walk away even from murder. The brain may be our largest organ, yet we speak from the heart when feeling amorous; when emotions run rampant we wear out hearts on our sleeves. We make a promise to our love by crossing out heart, and our hearts go out to anyone who loses their significant others. And when we know what we want? We set our hearts on it. Our intelligence may set us apart from a Darwinian point of view, yet it is our heartbeats that set us in motion, navigating through the illogics of it all.

The heart of Paris at the end of the Sixties was certainly beating wildly: a flourish of intellectual and artistic new waves, combined with a sound economic welfare, marked a full turn from the sobriety of the Fifties. Yet that few years of gaiety were "killed" by the 1968 Paris uprising: urban trenches were erected in the heart of Paris as street cobblestones were turned into medieval artilleries. Order, calm, harmony all gave way in that heated moment as everyone’s heart beat la chamade. It’s under this mixture of simultaneous cultural boom and bust, this combination of light and darkness that perfumer Jean-Paul Guerlain put his finishing touches on Chamade (1969), one of Guerlain’s fragrance masterpieces.

That’s the simple version of this story.

True to any Guerlain crown jewels cultural icons endorsing one another in Chamade, drawing upon references of different époques and interlocking them all in the most fascinating ways. Literature, cinema, military history all play part in its development; even a beloved Italian Renaissance masterpiece painting is involved.

In the next episode I shall explore the immediate cultural muses to Guerlain Chamade and answer an all-important question―What exactly does French novelist Françoise Sagan, cinematic icon Catherine Deneuve and Napoleon have in common?