“We chose Maurice Roucel to receive the order because we were deeply impressed by his olfactive creativity over the last four decades. During this time, he has developed his own way of creating remarkable scents by combining his unique inspiration and profound knowledge,” commented Frédéric Mitterrand on the decision to appoint Maurice Roucel Chevalier de l’Ordre des Arts et des Lettres. 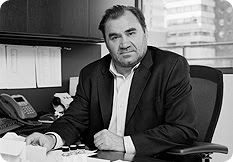 The Ordre des Arts et des Lettres is a French award from the Minister of Culture and Communication and was instituted on May 2, 1957. President Charles de Gaulle included it as part of the Ordre National du Mérite in 1963. It is awarded to people who have made significant contributions to the arts, literature or the advancement of these fields. The recipients are not exclusively French nationals.

Maurice Roucel looks back on 40 years of creative work in the perfume industry. During this time, he has worked for many renowned manufacturers of fragrances. In 1996 he joined Symrise and has since created many signature scents for the fragrance house. Among his most successful creations are Be Delicious by Donna Karan, Guerlain's Insolence and L' Instant, 24 Faubourg by Hermès, L by Lolita Lempicka, L'Onde Mystère by Armani, for women as well as Hypnose for men by Lancôme, Kenzo Air for men, Pleasures Intense by Estée Lauder, Musc Ravageur and Dans Tes Bras for F.Malle, Iris Silver Mist by Serge Lutens and many more... (K de Krizia perfume anyone?)

Maurice expressed his gratitude: “I feel very proud to have been made part of the order for my work as a perfumer. It’s always a challenge to find a way to express your individualism and at the same time meet the expectations of your customer and to give the consumer what they desire.”

A decision that surely leaves perfumery with an enhanced significance in the field of the arts.

Read an interview with perfumer Maurice Roucel on this link.
*Share with link: Tuesday, January 31, 2012