When Lutens launched L’Eau Serge Lutens, in 2010, he didn't mince his words: ‘When I presented L’Eau to my team, I felt like Saint Just informing the nobles they were going to lose their privileges.’ The concept behind L'Eau by Lutenswas interesting to analyse, even if the reality of the fragrance was lukewarm to hard-core Lutens fans such as myself. Now, he's following up with a second "Eau". Who, the magus of orientalia? Apparently yes. 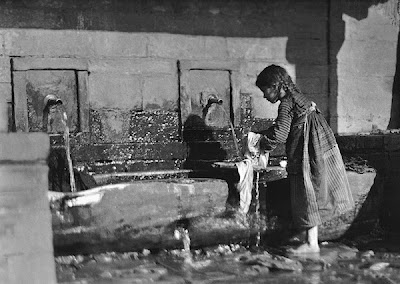 True to his signature blend of humor and provocation, next March the divine Serge will be presenting the follow-up: L’Eau Froide, a clear eau de parfum concentration of fragrance that will see his previous Eau joined by a similar-looking bottle. (1.7oz/50ml and 3.4 oz./100ml, 69 and 100 euros respectively at select doors stocking Lutens fragrances in March 2012).
What will Serge Lutens's upcoming fragrance L'Eau Froide smell like, though?

He only reveals frankincense aong the fragrance notes, the classic Catholic and Orthodox ecclesiastical incense note. ‘Frosty’ and ‘glacial’ are enot adjectives we tend to associate with incense (rather pyrocaustic is, although on Perfume Shrine we have devoted a whole series to different  varieties and  nuances of incense fragrances). But Serge’s response is probably what matters anyway: ‘People only notice the pyrogen facet in smoky incense burners… but not the coolness, except for the church’s.’Incidentally, Lutens is no stranger to incense in his impressive line already: Encens & Lavande takes on the ashen facets of lavender-nuanced smoke, while Serge Noire is the spicy, warm & cool contrast of serene meditation.
Back to the newest Lutens L'Eau Froide: "To begin with, it is cold, but in a nice way. Smells like rosemary, pepper… a slightly spicy-aldehyde-y effect, like bay leaves. A minty sensation too, plus a woody pinch of eucalyptus. Who knows, maybe it’s meant as a wink and a nod to Morocco’s “hammams”, or Turkish baths?" writes Nicolas Olczyk trying. it. 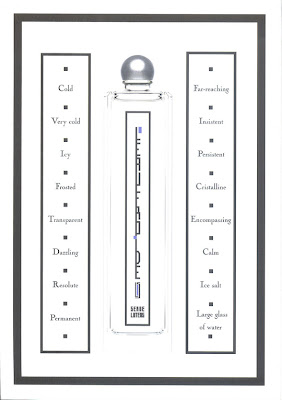 The bottle and the box are inscribed with iterations of coldness...cold, icy cold, frosted, transparent, crystalline, calm, ice salt, large glass of water...
I'm a firm believer in the cooling properties of unadulterated frankincense which I burn regularly: After all, the raw material shares citrusy top notes in itself, which dissipate and volatilise quickly rendering that cool smoky ambience we associate with stone temples of old.
One is quick to suppose that this "second act" might actually be an abandonded mod in the creative process of either of Serge's previous incense fragrances (or even of his L'Eau), but I can't wait to smell this aromatic interpetation of one of my favourite notes all the same. Expect a full review soon!