Speaking of the ethereal allied to the feral in fragrances while reviewing Tubéreuse Criminelle by Serge Lutens, I had tied the former to that other "otherwordly vampire of piercing eyes which draw blood inveigling us into submitting willingly to its almost sacral fangs", Messe de Minuit by Etro. To say that it is the most arresting in Etro's elegant line is no exaggeration, but neither would it be an overstatement to claim it has the most striking mien in current perfumery! 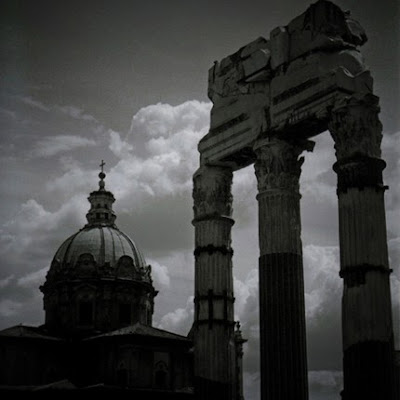 Messe has the admirable quality of producing gut-instinct reactions in everyone who comes into contact with it much like the Cloisters in the Metropolitan Museum of Art in NYC or the haunting executions chamber of Madame Tussaud's in London. Like the distant cousin who is neither elegant nor pretty, but when she sits on the piano everyone is mesmerized into attention, Messe de Minuit has a way of making you fall under its spell. Wearable it is not for most social occasions, even if one loves it like I do, so my personal solution for enjoying its wonderfully witching emissions all the time has been the discovery of the exquisitely luxurious candle: In its thick glass jar with its wide golden lid with the Etro logo on, it decorates my study at home, besides my old books collection and my antique camera from the first decade of the 20th century. Opening the lid equates a religious experience that reminds me poignantly of my own mortality, much like listening to the Commentatore scene of Mozart's Don Giovanni does, when he appears booming "Don Giovanni a cenar teco m'invitasti".

Even though the name (Midnight Mass) alludes to the catholic service of Christmas' Eve, in my experience the fragrance changes considerably depending on the season/climate, from the chillier crypt mustiness of the wintertime to a sage-like fuzzy warmth and gingerbread tonality in the warmer months. It in this frame that the fact la mama Sofia Loren chooses to wear it in the balmier nights of the South should be evaluated.

Introduced in 2000 by perfumer Jacques Fiori of Robertet (his tour de force in his many compositions for the textiles & fashions Etro line, founded by Gimmo Etro in 1968), Messe de Minuit starts damp and musty and brightly citrusy, with a scent that reminds me of raw pleurotus mushrooms left in the fridge for a couple of days. In this regard it is the shadowy mirror image to another citrusy incense fragrance from Etro, the more luminous Shaal Nur. The herbal and mildew-like quality gives a compelling weirdness to the perfume. The opening note also reminds me of the aromatic, herbal tête of the Slovakian liqueur Slivovica, but also of a frenzied July unearthing artefacts in the cave of Le Portel in the Pyrénées under the alternating hot sun and the cool shade of the archeological sheds. 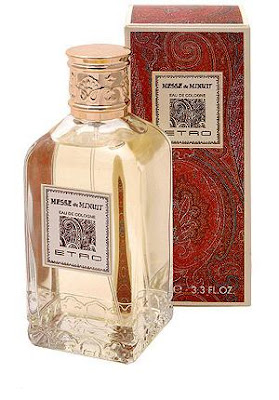 While Messe de Minuit is touted to be "an incense fragrance", its core is nowehere near other popular incense fragrances. Passage d’enfer by L'artisan Parfumeur, Comme des Garcons Kyoto and Creed's Angelique Encens (all wonderful!) are completely different; they present a more serene attitude that still has a beguiling quality about it, drawing you closer, not further. Messe de Minuit on the other hand creates a needed apostasy. It also doesn’t possess that rich, resiny, sweet, smoky quality that I associate incense with, perfectly exhibited in Comme des Garcons Avignon or Armani Privé Bois d’Encens. It is as if the REMNANTS of incense smoke have settled down and been dampened in a old Paleochristianic temple. No holy smell , no passage of angels , no spiritual elevation. On the contrary , this is an abandoned abode , a lonely place deserted by man and God that has been festering demons and evil spirits , unhealthy and perverse. I can definitely see the face of the Antichrist in the background….
And then , what a surprise! It becomes really warm, quite spicy and deeper with bitter myrrh and sweetens considerably thanks to the amber and a touch of honey, almost urinous but not quite. Those old demons know how to play tricks on you. They put on a slight smile to beckon you in and eat your soul. And it also becomes earthy and “dirty” and makes you wonder about a certain frustrated humanity they once had that has become a distant memory to them. And it lasts, as if damnation will be forever. As it should be. I can see Anne Rice’s vampires wearing Messe de Minuit effortlessly while cruising in the human world.

Messe de Minuit is available in Eau de Cologne concentration at Luckyscent in the US, Senteurs d'Ailleurs, Liberty and Escentual in Europe. The packaging has recently been redesigned (black & white design, silver cap), depicted hereby is the (prettier IMO) older one. The matching candle, which is gloriously fragrant even unlit, is available at Fragrancenet.