It's been called "Werther's Original in a bottle". It's been called "Infusion de benjoin". It's been called "a vat of Polish fudge made of condensed milk" or "cajeta". To my mind, it's neither, though I can see where the assessments are coming from. Prada Candy is simply the most unexpected launch of this autumn coming from the most blasé designer brand. I defy anyone to smell it and come up with a definitive verdict in less than a week's testing. It just keeps you guessing, is this for real? 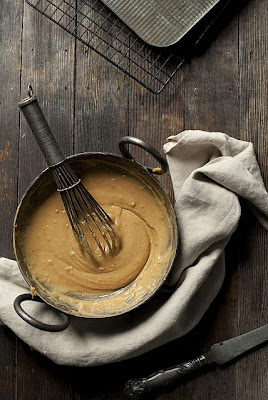 There's something inherently sophisticated about the Prada fragrance line (the apotheosis being L'Eau Ambrée; in contrast some of the Infusions are limp-wristed to me) and though at first glance ~or rather, sniff~ that's not apparent in Candy, in the end you realize that it could have been Pink Sugar, but it's not. It resembles the best-selling Aquolina scent in some respects; the strawberry-flavoured caramel being melted in a hot plastic cup, at some intergalaxial fun fair where waitresses are clad in A-line skirts embossed with lip prints in pastel hues. That doesn't mean that Candy is not a departure for the brand; something by  that name in a pop canister resembling a pink-edged coffee press is meant to be sweet and teeny-bopper and not coming out of the mind of Miuccia with her Communism background, right? Is catering to lower instincts like hunger and lust an opium for the people?

But there's thankfully a certain comfort factor about the new Prada fragrance instead of just dessert sweet, thanks to the deft of hand of perfumer Daniela Andrier; it's a complex gourmand oriental with a balsamic, drizzling, sexy background that holds it from becoming a total "teenagers-don't-know-any-better" mess. I'm not entirely convinced it's the best fit the brand could come up with (and it's not "me", which might be influencing me), but it's got a certain pull-in factor despite the identity crisis (Watching the commercial with Léa Seydoux I don't know if I'm supposed to laugh or hide my eyes out of shame on the protagonists' behalf). In short, Prada Candy is that confusing phenomenon: a fragrance that doesn't fit with Prada's image (much like L'Artisan's original Vanilia with its "simplistic" ice-cream cone scent was incongruous with the hippy, boho style of the rest of the brand), but somehow manages to appeal all the same.Of course one could argue that Prada might slap their label over a bottle of water and it would still sell like hot bread. True.

The composition features elegant musks up top with the intense flavour of milky, creamy caramel mixed in, some of the caramelic accents reminding me of the upper edges of lavender's spectrum. That caramelic note takes almost licorice & tonka facets, complex, abstract, like a passing kinship with the original Lolita Lempicka perfume. There is benzoin resin in the lower range of notes (much like in their best-selling Infusion d'Iris scent), purported to be as much as 12% of the formula -which I find hard to totally believe as benzoin is a known sensitizer- that creates a moiré effect between cozy and powdery. Benzoin naturally possesses facets like copal, a smell between medicinal and sweet, with earthier components (Smell Guerlain Bois d'Arménie which is full of it) . This characterises the drydown (i.e.the final phase of persistence) of Prada Candy on the skin after the first half hour following spritzing. The musky "dirty diapers" note, like baby urine, creates a background of soft suede and darkness reminiscent of a lot of vintage fragrances (it's the sexy note in Shalimar). A sneaky wink. And this is exactly why Candy is not dumping the brand or just aiming at a younger demographic, as one would be quick to cauterize at first "reading" of this launch.
The sillage is nice and cozy and the lasting power very satisfactory, after a while it becomes a skin scent.
I don't think I will be buying a full bottle, but I will tuck in  many samples in my bag for when I want to (contendedly) get down and silly. Nothing wrong with that!

Prada Candy is available at Eau de Parfum concentration at major department stores, starting from £40 for 30ml/1oz. and online (check the selection of discount fragrances for even better deals)
ETA: A new flanker, Candy L'Eau, a lighter interpretation, is introduced in spring 2013.