“All of us grow up in particular realities — a home, family, a clan, a small town, a neighborhood. Depending upon how we’re brought up, we are either deeply aware of the particular reading of reality into which we are born, or we are peripherally aware of it.”

Thus says Chaim Potok and today I am honoured to having been picked to introduce you an ultra cool project cinematographer (& man about the arts) Brian Pera and perfumer Andy Tauer will unfold in the coming weeks (We will have giveaways of samples and downloads and interviews, so stick around!).

Brian Pera introduced me to Evelyn Avenue, "a street in Memphis, Tennessee, located in the “midtown” area. There are tons of trees, old houses, people walking dogs or riding their bikes. [...]There are no garages, so you’re encouraged to say hello to your neighbors when you get in and out of your car, or to avoid them more creatively.". This neighborhood from real and lived in suddenly became an Internet small corner where the comings and goings of several creative minds are documented. They're also perfume related in a more tangible way, with a ten-year-long collaboration, with Andy Tauer's project Tableau de Parfums, portraits inspired by the shorts of Pera’s ongoing film series, Woman’s Picture; Woman's Picture is a series of short films involving childhood memories of the perfumes their mothers and grandmothers wore and what they represent to them. These shorts will be available for download on Evelyn Avenue and on DVD through the store at the time of each fragrance’s release, along with a novelette related to the character.

It is Perfume Shrine's honour to introduce you to Miriam's story today, through a perfume novelette:

"The sixties are saying bold patterns, geometric prints--and short, shorter, shortest--
but mother sticks to what she knows. Her nightgown is simple: a
pale floral design on a turquoise background, floor length, probably satin. 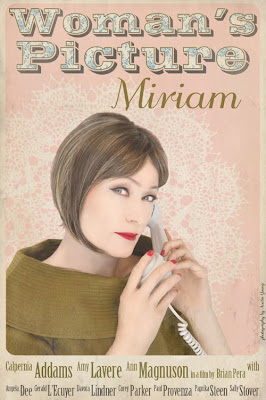 It has a mauve colored sash. She sits at the vanity, brushing her hair. At fifty, I’ll remember the feel of the fabric of this nightgown against my face, like the pillow on my bed, the feel of going to sleep, and how infrequently my mother let me near enough to touch it. The vanity is dark wood, possibly
mahogany. Mother got it from her grandmother, who got it from no one knows exactly where. It’s really just a table but mother has made it something more. Three generations of women have set themselves down before it, preparing, refining, thinking, rethinking.

The perfume mother wears, her signature scent, is its own little island, located at the farthest right end of the vanity. The crystal bottle reminds me of a tear drop. The stopper is long and sharp like a glistening dagger.
I’m seven years old. Mother is the world to me. Every morning, after I wake, I walk the hallway separating our rooms. I’m quiet so mother won’t hear me. I stop at her room and stand there in the doorway, watching her from behind. She finishes her hair and applies her make-up. She regards
herself for a moment in the mirror, pivoting to find the right angle.

I can’t read her face. It’s some kind of performance, it seems to me. It’s as
if she’s rehearsing. I pretend I know what she’s thinking, putting thoughts
into her head. I pretend I’m her audience and that in some way we’re
communicating through this performance. It’s the closest I come to under
standing her but I have no words for what I’m seeing and feeling.

She reaches for the bottle at the edge of the vanity, drawing it closer. She
lifts the stopper and dabs once on each side of her neck, observing her
reflection. Before she replaces the bottle she holds the stopper under her
nose and she closes her eyes, drifting off somewhere on the smell. She looks
like pictures I’ve seen, women lost in private moments, enacting some kind
of ritual no one else is meant to see. The pictures make the moments
public. Staring at them is like watching my mother from her doorway. You
feel you know these women. You might be them - if not now, then one day."

The Series launches its first episode of the portrait series, MIRIAM, on Evelyn Avenue, coinciding with the launch of the MIRIAM perfume, the first release by Tableau de Parfums. MIRIAM features Ann Magnuson as a home shopping network hostess whose life has reached crisis point. MIRIAM will be available for download in the third week of October, when there will also be a prequel of the companion ROSE. Miriam Eau de Parfum by Tauer Perfumes launches on October 7th at Scentbar (the brick & mortar store of Luckyscent) in Los Angeles, while the day before several of the Woman's Picture shorts will screen at the Royal T Gallery in Los Angeles.

There is a host of people participating as well so check them out for more news:
September 7: Persolaise September 14: Olfactorama September 21: Perfume Smellin’ Things September 28: The Non-Blonde October 5: Perfume Posse

Tomorrow on Perfume Shrine, a preview of Miriam EDP, a surprise and a giveaway!! Don't miss.