Plus ça change, plus c'est la même chose.
(The more things change the more they remain the same.)
French proverb

For the majority of the summer Perfume Shrine has been investigating a grand perfumery mystery. The million dollar question: Finding the name of the next fragrance to be launched by Christian Dior. For two months, though living in separate continents (Elena in Europe, me in North America), we have been busy searching and researching high and low, busy forming hypothesis on what will happen within the up-coming months.

Now the keen readers might have deduced that we were only interested in the name and not anything else—for yours truly have sampled it way back on the second week of July and lived with it for a whole day, silently and carefully observing its sillage and diffusion. In fact when the Russian Elle made the announcement two weeks ago it was merely a confirmation of what we have secretly known for months. The intrigue started on an unassuming Saturday, July 9 to be exact. Elena received a short message from me (for privacy reasons details of day have been modified):


"I just came back home feeling very intrigued because a very chic young lady I know was wearing a fragrance I simply couldn't identify. For hours it was driving me insane: It smelled fantastic on her, but I just couldn't name it! My first guess was 31 rue Cambon, but I know the Chanel has more ‘gras’ and a bit more pronounced black pepper. After 2 hours I finally had the courage to ask her what she was wearing. Turned out she was wearing the latest Christian Dior, yet to be on the market—she got it as a gift. Now, she was too elegant to name drop..."

Surely we all have moments which a story is at the tip of the tongue, knowing how frustrating it is to name that fragrance, the music we’ve just heard or that book we have just enjoyed. But to name a fragrance that is not out on the market? I now know why the antagonists in Russian folklores often ask their subjects to find the thing I do not know as one of their cruel tasks!

The fragrance itself was not hard to figure out on the other hand. As I communicated to Elena within the same message: 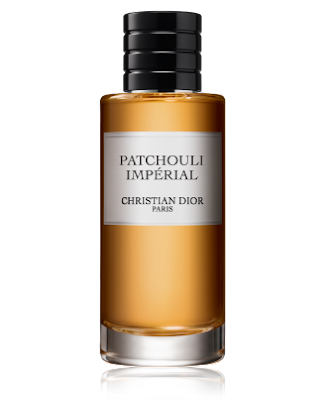 "I can tell you that the new Dior fragrance, if the news can be verified, is a modern chypre and a kissing cousin (and I do mean kissing cousin) of Chanel 31 rue Cambon with pronounced patchouli, orris, incense (my money is on frankincense), musks (I sensed ambrette and modern musk effects), and spices (definitely black pepper, but more complex as well) with a stable and sustained development and a very work-appropriate sillage. Not a lot of citrus, but neither is Rue Cambon. The only thing that I consider an improvement is the patchouli and the black pepper facets are slightly more nuanced than 31, which is sharper. The orris used in this Dior is not as obvious. I observed the fragrance for hours and the smell is an engineered marvel, as it did not waiver a bit throughout the duration".

Even until now, months after sampling it, the scent of Patchouli Impérial still floats comfortably on my mind, steady as a diver’s back, delicately forceful as the gaze of a Nubian woman. Its structure concise, its proportions disciplined. Looking at the official notes I now can recognize how the Sicilian mandarin modifies the Calabrian bergamot, almost hidden with the piquant smoothness of Russian coriander seeds—all could have easily gone unnoticed but they are there, interesting second glances. Now of course the patchouli is decidedly present—the Indonesian variety, mind you, having a slight pungent, crisp green characteristic—but hardly a solifolia at all. Rather the patchouli used here is a context, straddled between the bergamot and the musk, creating a modern chypre effect, and, when paired with the sharp cedarwood (Atlas, not the Virginia variety, would be my vote) and sandalwood (most definitely a convincing replica for costs and conservation purposes)...the effect isn’t too far from, again, Chanel 31 rue Cambon in my humble opinion.

I am in no means to suggest or to imply that the juice of the venerable, contemporary Chanel classic somehow accidently slipped into the analytical lab of Parfums Dior, nor I am in any position to suggest François Demachy, who authored Patchouli Impérial, of imitating the work of Jacques Polge and Christopher Sheldrake. Yet Monsieur Demachy’s tenure at Chanel is fairly evident with the latest Dior composition, injecting an abstract richness into the realm of Dior fragrances while carefully editing the existing Dior archive. All this cannot be coincidental.


Still, here's another million dollar question: What’s with the lateral lineage when Dior and Chanel are originally supposed to stand for almost opposite views on luxury?
Many avid readers of Perfume Shrine will no doubt have read Elena’s less than optimistic review of the latest Dior commercial, how stars of the bygone era like Grace Kelly, Marlene Dietrich and Marilyn Monroe—the last being forever linked to Chanel No. 5, no less—have been used to advertise J’Adore. Interesting to note that Dior did not hire anyone to play dress up: All of the bygone stars are brought back using CGI technology. Dior, in short, is re-editing its history much like what Coco Chanel did throughout her life.
Let’s consider that facts here: In order to raise its competitive advantage LVMH, the mother ship of Dior, needs to grow by making commercial acquisitions. (LVMH's latest acquisition of Bulgari is yet another stern reminder.) Yet in the current economic environment the few remaining worthy brands are, in the case of Hermès, rarely available aside from a minority stake. And in the case of Chanel the shares are 100% unavailable, having owned by only the Wertheimers. All of which in private equity.
So what would you do if you were Bernard Arnault, the chairman and CEO of the French conglomerate LVMH if owning a stake in Chanel is not very possible within the immediate future? Given the choices I would have done exactly what he did: hiring the former Chanel deputy perfumer, imitating its legacy. It’s nothing personal, just business.
(On the flip side why is Chanel being content on being commercially competent when Dior is nipping at its heels, especially given the recent releases such as N°19 Poudré? That’s honestly not for me to answer at this space—but certainly begs the question, no?)
What strikes me as interesting with the latest l’offre is the dialogue between Polge and Demachy, almost a perfumery development process ~Jacques creates an essai olfactif while Demanchy suggests the possibilities of the theme. To comment, to reflect. I think if one approaches from this perspective this fragrance will be interesting.

But all that aside the bottom line to me, of course, is that now I cannot smell this fragrance without thinking of the lovely young girl who introduced me to this scent. She was wearing a navy print flouncing chiffon mini-skirt on that day, cut to perfection just right above the knees. Fantastic legs and just a great pair of strappy leather sandals. A beautifully cut solid black top, with impeccable silken shoulder-length hair and almost perfect manicure. Funny how I remember people when they have a way with fragrance.

Christian Dior Patchouli Impérial is created by perfumer François Demachy and contains notes of: Sicilian mandarin, Calabrian bergamot, Russian coriander, Indonesian patchouli, cedarwood and sandalwood essence. It’s the latest addition to the upscale La Collection Couturier Parfumeur Christian Dior line and is available for order at Dior boutiques worldwide and the official website. Patchouli Impérial is marketed for women, although as a patchouli fragrance it can be used as unisex under the appropriate context.