Nuit de Noël by Caron is definitely among the legends that made the name of Caron. Conceived and launched in 1922 by Ernest Daltroff, the founder of the French house and a self-taught perfumer, it includes to great aplomb that famous base (a ready made mix of ingredients that produce a specific effect) Mousse de Saxe, composed by Marie Thérèse de Laire, flanked by amber, moss, vetiver, rose, sandalwood and jasmine.[If you don't know how it smellsor its story, I suggesting first reading this Nuit de Noel review. ]
Getting a vintage bottle of this precious fragrance is akin to savouring a well-aged liqueur, full of nuance and dark corners. Trying to date bottles is a bit less of a nonchalant exercise, but here's a small guide with photos to help you through. 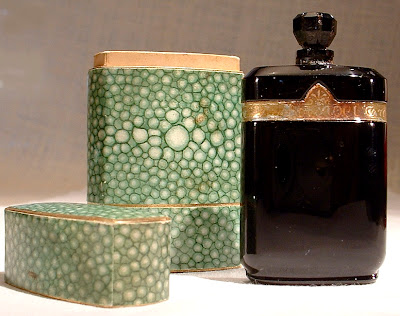 The original extrait de parfum of Nuit de Noël came in opaque black bottle designed by Felicie Vanpouille /Francoise Bergaud with a faceted boule cap and a box shaped like a purse in green shagreen (i.e. rawhide with a rough, granular surface, made from the skin of a shark or seal). The little golden "band" around the shoulders is meant to echo the headbands of the flappers to which it was addressed originally. There is also a green tassel hanging from the cap of the box (not depicted), further reminding of a cute clutch. There was also an outer white cardboard box, to protect the green shagreen. The interior of cardboard cap reads CARON 10 rue de la Paix Paris FRANCE. The dimensions are 4.5" high with box around 4-5/8" and tassell 5".
The presentation persisted well into the 1940s and 1950s, making it hard to discern specific vintages. Obviously older specimens bear more worn "bands" and shagreen boxes, even if totally sealed (a highly unlikely proposition anyway). 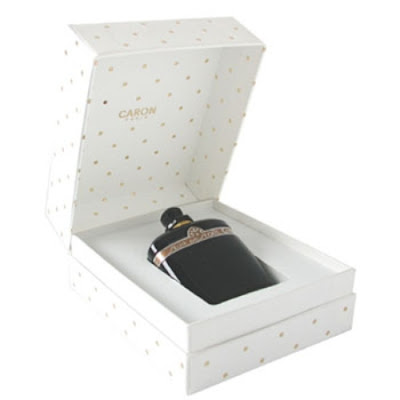 The modern presentation of Nuit de Noël since several years eschews the green shagreen and encases the art deco black bottle in the white fold-down box with the polka dots that all Caron extraits come into nowadays. Previous presentations in the intermediary years -without the shagreen box- have the white cardboard box in wider-spaced polka dots with a darker circumference. 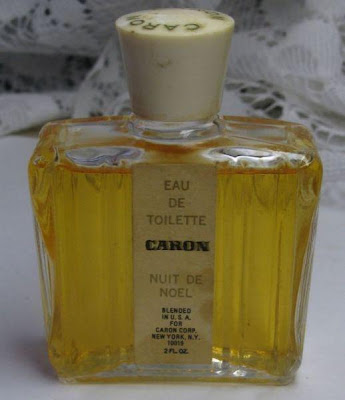 Vintage Eau de Toilette (as well as the superb and lasting Eau de Cologne) circulated in square shouldered bottles, like the one above, with a bakelite cap. The jus was blended in the USA for the American branch of Caron Corp New York N.Y. Typically they circulated in 2oz/60ml or bigger. 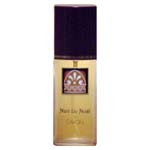 In the 1980s the whole Caron line gained a more rectangular presentation with black cap in plastic and the labels took on a decorative motif for the Eau de Toilette concentration. The one for Nuit de Noël bears the design depicted above. 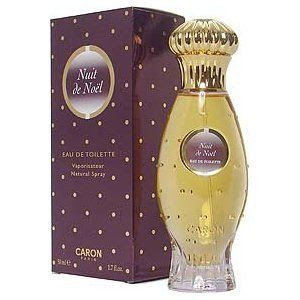 The modern Eau de Toilette comes in a purplish-maroon box with gold polka dots, while the flacons take on the familiar and legendary studded peppercorns design with the gold cap. The label reprises the colour scheme of the outer box. 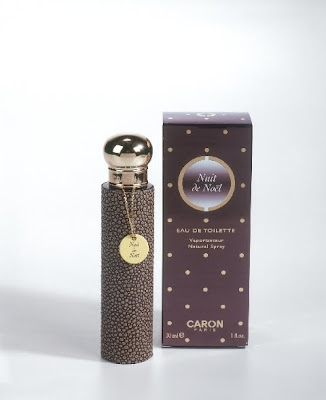 The above is an edition that appeals to the collector spirit, although it's standard merchandise. It's the 30ml of Eau de Toilette with the outer of the bottle reprising the vintage shagreen scales (although it's not shagreen this time) 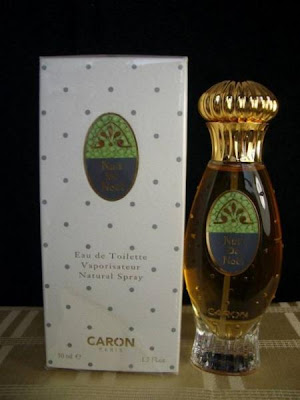 Another intermediary Eau de Toilette version circulates in the white box with the gold polka dots, but the label of the peppercorn flacon imitates the motif of the previous 1980s label, as you can see comparing the two pics.