To associate the creamy, reflective and rather introspective quality of Caron's Nuit de Noël (Christmas' Eve) with the naiveté and relative innocence of a Parisian Christmas' Eve Mass is to misunderstand it. If anything, it's a scent of late November, when huge plates of seductive marrons glacés start being displayed at the Viennese Café Bräunerhof, all starchy comfort and glazed vanillic sweetness, chased away by a shot of bitter Fernet Branca after a hearty meal. I'm instantly reminded of La dame aux Camélias (1848) by Alexandre Dumas fils, where marrons glacés were the only type of confection that the courtesan Marguerite Gautier would eat. Her clients were expected to buy bags of them for her to enjoy. Personally I expect my own admirers to gift me with Caron's Nuit de Noël instead; the two are closely linked in the amount of pleasure and allure they exude. 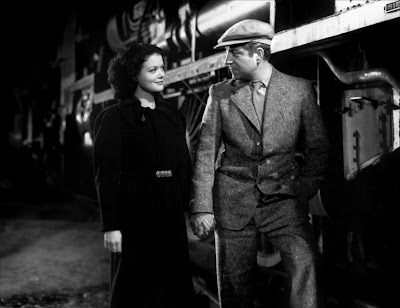 Nuit de Noël, composed by the founder of Caron, self-taught perfumer Ernest Daltroff, in 1922, is rumored to have been suggested by his longtime partner, Félicie Wanpouille, who adored Christmas Eve and the scent of warm furs and incense.
The black Baccarat botte with the golden frieze (like a flapper's headband) is forever associated with the Roaring Twenties, but the scent itself seems at odds with its times and partly its name; even though the intensely warm scent is as pliable and soft to the touch as the softest sable, a parfum fourrure indeed (with the more innocent meaning of the two), its mood is neither one of uproar nor of traditional Christmas smells (cinnamon, spices, pine, gingerbread, incense).Many insist on wearing it at Christmas' time, none the least of which is perfume collector and connoisseur Roja Dove and fashion designer Karl Lagerfeld.

Formula and Intricasies
Caron's Nuit de Noël (1922) is a soft oriental built on an accord of rose absolu and Mousse de Saxe perfumer's base (i.e. a ready-made accord of ingredients producing a specific effect), with the addition of 25% sandalwood, jasmine, ylang ylang, lily of the valley, vetiver, amber and iris. It's prismatically constructed around 6-isobutylquinoline, a leathery molecule.
The fragrance emits a cozy, inviting scent poised between the starch of marrons and the bitterness of the iodine/leathery note (hence my Fernet Branca evocation) fading into musky woods. Indeed the famous "Mousse de Saxe accord" is comprised of geranium, licorice (created with anise), isobutyl quinoline (leather notes), iodine and vanillin (synthesized vanilla). If older Carons, especially in their superior vintage form, are characterised by a signature "Caronade", a common thread that runs through them, Nuit de Noël is a good place to start this escapade into one of the most chic and historical French perfume houses. 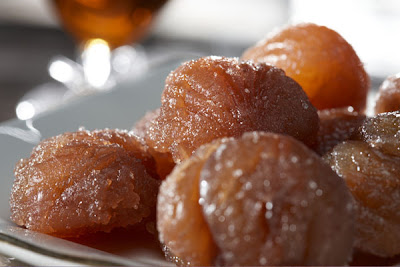 Less incensey than similarly oriental Parfum Sacré, less abrasive or bold than straightforward leathery En Avion or Tabac Blond, Nuit de Noël has a sheen that starts and ends on an unwavering tawny pitch. The spiced rum-licorice notes aplified by musk (a musk comparable to that in Chanel's No.5 and Bois des Iles) take on a rich saturation; the fragrance dries down to a powdery warmth redolent of the bourgeois scents of a festive evening spent outdoors. 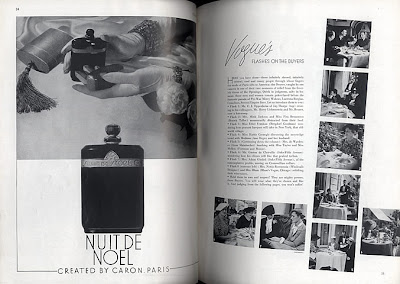 Comparing Concentrations & Vintage vs.Modern Nuit de Noel
The modern Eau de Toilette has taken a rosier take than the one in my vintage bottle from 1970 which seems oilier and darker in mood, with a heavier dose of ylang ylang. The Nuit de Noël extrait de parfum plays more on the leathery, woody notes of the Mousse de Saxe base, lasting for a whole night till the next morning; when you wake up and smell your pillow with all the longing of a passionate lover who is already missing what he has just now savoured.