Why is it that leather fragrances often produce the effect Frau Blücher's name does to horses in Young Frankenstein? Many otherwise accomodating perfume enthusiasts report some leather fragrances smelling pungent, sour or just outright harsh, admitting defeat and throwing the towel. But Etro, bless their joyful Italian hearts, have come up with the right answer for those cuirophobics: a friendly modern leather to eclipse fears and ignite desires instead. 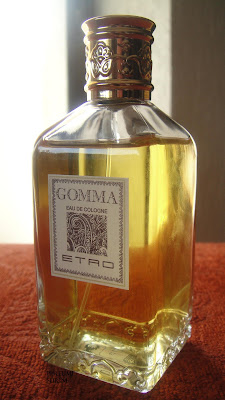 Unlike "Blucher" which (does not) mean glue in German, "Gomma" means rubber and one would expect the "hot tires accord" and elastic that is purported to be at the heart of Bulgari Black (I say "purported" because the rubberiness of Black is actually quite vanillic and smooth to me, rather than acrid as one would imagine). There is a dose of it at the top in Gomma, but nothing to frighten the horses, if you will allow the pun.
Technically a "woody chypre", but more acurately an ambery leather, Gomma is among Etro's most successful creations, if only because it's distinctive (in the Knize Ten mould) and at the same time user-friendly. Composed by legendary perfumer Edouard Fléchier, it would be, wouldn't it? Not only does it layer well under simple soliflores, if you're after that sort of thing (try it with an iris or a carnation, or even better a lush jasmine to compliment its own floralcy), but it lends itself to easy wearing throughout the day and lasts rather well on my skin and on clothes, despite it being only an Eau de Cologne concentration. I can only imagine just how satisfying an Eau de Parfum version would be.

The secret of Gomma's success? A sheer pungent leather base that is more like birch tar (Cuir de Russie, Tabac Blond) than pike-harsh green quinolines (Bandit) and most reminiscent of Knize Ten (quite close in fact, although the Knize is brassier, fruitier, with lots of castoreum). But the theme is rendered via a diaphanous treatment with a slightly herbal-soapy tonality and a pleasurable sweet accent of indefineable white flowers. It's therefore the perfect leather fragrance for summer wearing or for the office without betraying the insouciant character that a cuir fragrance brings to its wearer: You won't stand out like a sore thumb, but you will leave others wondering what is that indvidual (and delicious) smell.
Staying power is average on the whole especially taking in mind the concentration, while warm weather seems to extend the sillage/trail left behind. And as to who can wear it? "I don't know if it's a masculine, a feminine or a unisex scent." the Non Blonde proclaims. I concur. Even inanimate things take on a new 5th dimension in it! 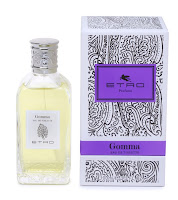 Etro has revamped their packaging recently, making all caps silver instead of gold and rendering the boxes a graphic black and white instead of the old paisley (which I prefered). You can see both versions in the pics.
A 3.4 oz/100ml bottle retails for $165, on Amazon it's 143$ but sometimes it can be found discounted.

Photo of old-style Etro Gomma bottle by Elena Vosnaki (click the pic to enlarge). Newer packaging via punmiris.com
*Share with link: Wednesday, May 12, 2010