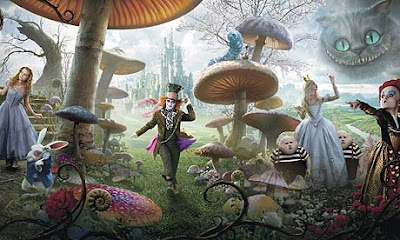 Indie perfumer Roxana Villa of Roxana Illuminated Perfume has created a trial version of a green fragrance with rose at the heart titled "Smell Me". She will be giving away five samples of the fragrance as part of this blogging collective inspired by the tale of Alice in Wonderland.
GAME: To be entered to win a sample of "Smell Me" please visit each participating blog and determine which character from the story each blogger has assumed. E-mail your guess to Roxana (at) IlluminatedPerfume.com. Five winners will be chosen to receive a sample of the first edition trial of the fragrance! 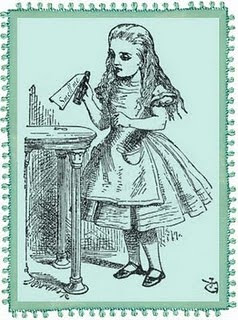 "They are rattling breakfast plates in basement kitchens,
And along the trampled edges of the street
I am aware of the damp souls of housemaids
Sprouting despondently at area gates.
The brown waves of fog toss up to me
Twisted faces from the bottom of the street,
And tear from a passer-by with muddy skirts
An aimless smile that hovers in the air
And vanishes along the level of the roofs"
~T.S Eliot Morning at the Window

Years back when I started perfume blogging I began with the enthusiasm of the passionate collector who was trying the plethora of new juice on the market as soon as they were available. Even though it was plenty, it was nowhere the sheer mushroom-sprouting-quality that has sprung lately. It was impressive just how involved and meticulous I had been in the project, first and second and third chorus echoeing in my ears "try this", "try this", "try that"... It was hard finding one's way into this enchanted land of fragrance, but once one did, everything began to have meaning and a passionate discourse among aficionados began concerning the relative merits of this or that. I recall I was grinning on several pretensions, as I continue to do. Some call me stregatto, others prefer to call me sane. The crux of the matter is that several things have changed as online perfume writing and online discussion of perfumes has evolved and we're seeing an expansion from all strata. I continue to file all in my big library and note little cryptic notes, which might make no sense, in the borders. Can I help anyone find their way in the entangled fragoland? It all depends on where you're going. And if you don't need to delineate a specific course, then it doesn't really matter which way you go and you're in for the ride down the rabbit's hole if you walk long enough. It's all good!


Check for hints of the other characters:
Roxana at Illuminated Perfume Journal
Heather at Memory and Desire Won't be participating after all due to personal reasons
Lucy Raubertas at Indie Perfumes
Beth Schreibman Gehring at The Windesphere Witch
Tom at PerfumeSmellin'Things: The hint is "quote the raven: 'teatime'"