A sexy actress in her boudoir after her performance: Pensive , smiling hazily to herself as she lifts her hair off her forehead and gazes at her image in the mirror. Her most enthousiastic fan has sent her armfulls of liles , bunches of honeysucle and posies of hyacinth to fill the room and her lacy clothes with an initially fresh and sweet fragrance , with a penetrating aroma that becomes deeper and slightly decaying as time passes. The whole concoction is intoxicating somehow, yet it makes her think of him with nostalgia. She thinks she's falling in love... It's a Grand Amour. It has to be! 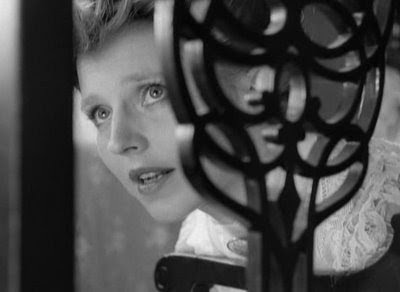 That had been my impression of this rich floriental, composed by Isabelle Doyen, redolent of heady flowers and a balsamic ambery base when I had tried it for the first time back in 1997 when it launched, on a trip to Austria. I recall that the splendid presentation of the butterfly bottle alongside the dewy flowers in the filigree vases around with their fin de siècle ambience had captured my attention and provoked the above image, which is still firmly with me after all those years. The recollection made me nod my head a little when I read Tania Sanchez in Perfumes,The Guide saying: "[it]has impressive ambitions, combining aloofness and warmth in search of that magical proportion that turns a starlet into a star".

Grand Amour immediately stroke me as a little decadent and "intimate", not as airy as the majority of the Goutals I had hitherto tried, and indeed, alongside firm staples Passion and L'Heure Exquise, most of my favourite Goutals fit into the category that the Goutal people term as "capiteux"; more or less "heady". Inspired as it was by the bouquets that the cellist Alain Meunier presented to Annick during their courtship Grand Amour is officially described as "A perfect balance of carnal flowers, lily, hyacinth, honeysuckle. A hymn of sensuality with notes of amber, musk, myrtle". 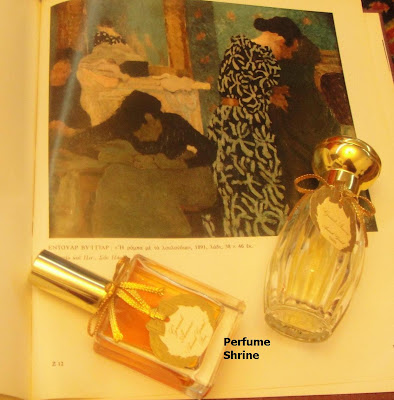 The atmosphere of Grand Amour is one of sustained uncertainty, poised as it is between the unctuous base of its resinous orientalia and the grassy, sappy, almost refreshing floral top; honeysuckle first reveals its yellowish, nectarous blossoms, reminding me of the exquisite moment when winter falls into spring, then hyacinth takes reign with its intoxicating pollen-like aroma. Its powdery, dry earthiness is the perfect accompaniment to these first days of spring when the longing to see new bulbs erupting sprouts is so ingrained into the melancholy of a long winter. In several ways (the soap, the powder, the hyacinth) Grand Amour is comparable to Guerlain's classic Chamade from 1969, another head-long dive into romance, yet I do not detect much of the characteristic galbanum and oakmoss of the latter (at least in its vintage form).

The Eau de Toilette highlights more of the romantic, soapy aldehydic hyacinth notes while the Eau de Parfum of Grand Amour is more base-heavy in the incense-like myrrh tonality and allover denser and sultrier. It is also naturally more orange-hued in contrast to the light straw-coloured Eau de Toilette, so don't be alarmed if you come across dark juice, it's not necessarily spoiled. If you really like that sort of effect and are that sort of woman, I guess you need both versions.

Grand Amour by Annick Goutal is available as Eau de Toilette (30-50-100ml) and Eau de Parfum (50ml, 100ml) in the classic gadroon bottles and in a red butterfly bottle at boutiques carrying the Goutal line and several online venues. Check Lianne Tio's Nederthelands boutique on this link as well.