The history of the Guerlinade accord, original & re-issued Guerlinade perfume by Guerlain

Like many other confusing matters pertaining to fragrance history the often quoted name Guerlinade stands for several seperate things and disentangling them is at large an exercise in minutiae. Historical minutiae being within the scope of Perfume Shrine from the very start however we hope to cut through the knot which perfume companies often present us with. So this little guide is aiming at providing answers to what the Guerlinade accord is, how Guerlinade smells and in which Guerlain perfumes it can be discerned, which fine fragrances were named Guerlinade and their packaging and availability as of this minute. 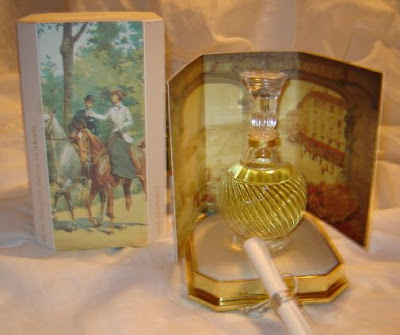 Originally La Guerlinade was the code-name for an olfactory harmonious blend ("accord" in perfume-speak) ~possibly conceived by Pierre-François-Pascal Guerlain* but first referenced in relation to Jacques Guerlain** ~ that typified Guerlain perfumes in their classical compositions and made them the stuff of legend: Bergamot, jasmine, rose ~especially the Bulgarian version rather than the Turkish one~, orange blossom, iris, (possibly vetiver), tonka bean, and vanilla are said to be the main ingredients comprising it. Of course the exact formula of this special accord is guarded with the zeal Fort Knox is, but most perfumephiliacs can identify the above notes forming the characterist nuance of the chord that runs through the melody of L'Heure Bleue (along with trademark heliotropine) ~especially in Parfum de Toilette and vintage extrait de parfum~, Shalimar and Vol de Nuit; this nuance either captures in its guile or haunts with terror the fragrance enthusiasts. The fragrances composed by Jacques Guerlain especially are intensely redolent of this accord, although Mitsouko is less immersed in it, opting for the oakmoss chypre base under the notorious peach-skin note.

Strangely enough, the term only entered popular parlance outside of the Guerlain labs at the launch of masculine scent Héritage, as Sylvaine Delacourte, artistic director of parfums Guerlain reveals! Like a silky veil, the Guerlinade softens any sharp angles and smothers the composition in the purple hues of twilight. Its feel is polished, bergamot fusing its elegant freshness with rose and vanilla and the tonka bean gives a vague sense of hay, powder and tobacco. But its perfume-y ambience can also feel somehow retro which is why sometimes modern tastes run antithetical to its rich, textured feel.

Guerlinade nevertheless also happens to be the name of a Jacques Guerlain creation from 1921 which came in a beautiful bottle of intensely faceted crystal, shaped like a lekythos. The Guerlain archives include a vegetal lotion issued in 1924 with the same name, an early thought of an ancilary product so to speak. The scent after some "renovation" was re-issued as a seperate, limited edition Eau de Parfum in a new Baccarat flacon design to celebrate the 170 years of Guerlain in 1998 (circulating again as Guerlinade in a presentation that depicted paintings of Parisian life, depicted above) and later re-issued yet again in Les Parisiennes boutique line (in standard bee bottles, depicted below) upon renovation of the 68 Champs Elysées fragship boutique in 2005. Nevertheless the actual scent was different than its predecessor and the famous accord: it had a predominent streak of powdered lilac (a lovely one at that) ~and perhaps a touch of oily hyacinth garlanding it with its "dirtier" streak~ and little relation to the characterist chord that Guerlainomaniacs recognise instantly. Its powdery retro formula (a little iris, a little tonka) explored bouquets of impressionistic vignettes of Parisian life amidst equestrian scenes when gentlemen with horse-drawn carriages would bow down to pick up the handkerchiefs of ladies blushing beneath their veiled little hats. The homage in Guerlinade the fragrance was more that and less an actual reproduction of the exact secret formula for the Guerlain house "signature". 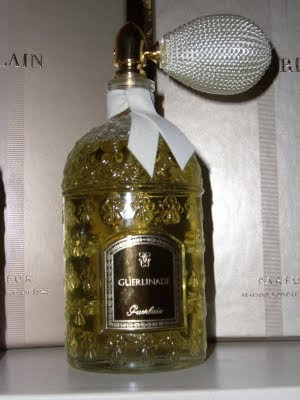 Today the fragrance named Guerlinade is discontinued and no bottles can be found at boutiques Guerlain updrading it into a collectible. Much like happens with other elusive limited editions such as the Harrod's aimed Belle Epoque from 1999 with its musk-veiled tuberose, the No.68 limited edition which reworked Guet Apens, the Champs Elysées Bacarrat turtle/tortoise bottle amongst them...

Yet the renowned accord hasn't died; far from it! The classic Guerlinade harmony was revisited in a Limited Edition commemorative Eau de Parfum fittingly called 180 Ans de Création (meaning 180 years of creation and issued in 2008 to commemorate the 180th anniversary of the house of Guerlain) Jean Paul Guerlain twisted the idea of the classic Guerlinade harmony, realising its aura is often perceived as admirable but a little outdated, and thus added contemporary accents in the form of grapefruit, pink pepper and white musk. The result is elegant, polished and a study in dry warmth and I sincerely hope it becomes more widely available than the gifts given out to the participants of the 180th anniversary celebration. In the meantime we can admire and savour the classical Guerlinade, "un état d’ Esprit", in several vintage Guerlain fragrances where it is shining in all its unadulterated glory.