On occasion of the celtic lunar calendar day of the oak which is on the 10th of June, today I am grabbing this chance to introduce a new feature, the Mythology Series, which will fuse folklore, poetry and some of the most prevalent myths concerning aromatic plants.

The oak tree with its bittersweet timbre has been a symbol of stability and silent might ever since antiquity. It therefore comes as little surprise that it was attributed to Zeus, the mightiest of Gods. In Dodona, the sacred place of Zeus’s worship, where every summer ancient Greek tragedies and comedies are performed anew in its open-air amphitheater, oak trees that seem like they have been growing since the dawn of time reign supreme. Their leaves were crowning the winners of the drama competitions and the chariot races in the glorious past. Today they cast their welcome shade to the weary traveler who has been up the creek towards the ancient oracle, the second in importance in the whole Mediterranean after that of Thebes in Egypt. Legend wants it that two eagles, hatched out of the same egg, flew over the sea; one of them descended in Thebes, the other in Dodona, thus affirming the regal choice of these places of worship. 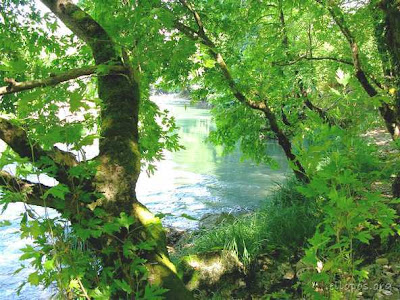 Contemplating the oak tree, one is transfixed by its hefty circumference, the long-extending branches full of wide leaves, the rough texture of the bark and the lichen that attracts itself on it (Evernia Prunastria or simply oakmoss), of which perfumery has justifiably occupied itself for long. It suffices to catch a hint of that mossiness in famous chypre perfumes like Dior’s Miss Dior, Cabochard by Gres, Carven’s Ma Griffe and Chanel No.19 to realize how the grandeur of the oak tree is lending a facet of that characteristic to the ambrosial parasite.

Conversely it is the fruit of the oak tree, βαλανίδι, which has been fed to swine for centuries as cheap supplement to their diet, and even the divinely favoured Ulysses had to witness his companions feed upon them when they were transformed by Circe into said domestic animals. The fuzzy green balls crack open under the nail with a surprising bitter herbal scent to later reveal the more familiar nutty aspects. And the association with might must not have escaped those who onomatized the inner edge of a male organ as βάλανος/balanos (etymologically derived from βαλανίδι)!

In celtic mythology oak stands as a gateway between worlds, or alternatively the vantage point where portals could be erected, while in Norse mythology it is connected to the warlike god Thor. But even in modern lore, oak has never lost its symbolic resonance that ties it with quiet power and mighty dominion. In Gone with the Wind, the tranquil, gentile mansion of Ashley Wilkes and his bride-to-be Melanie, where Scarlett is turned down thus catapulting the plot, is fittingly named Twelve Oaks. Throughout the novel it acts as the idealized place of refuge from the constant turmoil that the war has brought into the lives of the heroes and contrasts with the more cheerful Tara; the latter plantation like the female protagonist comes through thanks to its adaptive powers. When the old and majestic Twelve Oaks crumbles, it takes forever with it the dreams of the old, secure way of life for Ashley and Melanie...

In perfumery oak wood extract can be used to bring aspects of the imposing feeling of the oak tree into woody fragrances for men or women. with dry, liqueur-like accents. Now that oakmoss essence has been heavily rationed and synhetic approximations like Evernyl do not give an adequate substitute, oak wood extract, although less green and mossy, or even fougère-tinged is increasingly used, coupling especially well with wine accents, fruity scents and reinforces vanilla notes. This is how Serge Lutens used it in his Paris exclusive Chêne (French for oak) and in Miel de Bois. Baldessarini Ambré for men is another scent which exploits those facets to good effect. Oak also makes an ilusionary appearence as a top note, interestingly enough, in Eau de Merveilles by Hermès!

A fragrance which plays upon all aspects of the oak tree is Roxana Villa’s Q, a botanical artisanal scent by Roxana Illuminated Perfume, that is dedicated to the endemic oak population of the Californian woods with Q standing for Quercus, the botany name for oak tree (quercus robur). From root to kernel and from branch to bark, Q is anchoring and centering like only an afternoon below the shade of an imposing oak can be. But most importantly, part of the profits goes into the California Oak Foundation preserving that oak population, so that future generations can be ensured of a comparable experience. (You can find Q for sale here).
And when I try to recreate the austere atmosphere of the holy oaks at Dodona, I fall back on burning the old reliable Oak/Chêne candle by Diptyque, whose scent transports my spirit into a land of forever-living lore.