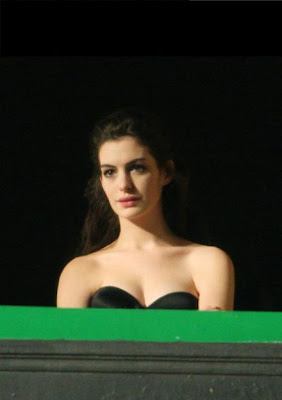 Lancôme presented their latest fragrance Magnifique to the press featuring their new ambassador, actress Anne Hathaway, at the Grand Palais in Paris. Talented and pretty stars are nothing new in the Lancôme galaxy and their previous choice of Kate Winslet as new face of Trésor had me enraptured. Hathaway (who had professed a predeliction for Chanel's Chance) is equally lovely in a Snow White suit instead.
Magnifique set out to olfactively interpret the colour red, from the bottle, to the colour scheme of Hathaway's dress, to the admitedly cheddar-heavy US print-ad. Hence to avoid the latter factor, I chose a picture from the upcoming Peter-Lindberg-directed commercial, in which Hathaway poses as a cross between a Nikolaos Gyzis and Edward Hopper model.

Technically, Magnifique is a spicy woody floral, composed by Firmenich perfumers Olivier Cresp and Jacques Cavallier (a collaborating duo on many popular fragrances).
The inspiration, according to Woman's Wear Daily was Nargamotha/cypriol (Cyperus scariosus). Nagarmotha is a plant of the Cyperaceae family, also called Nagar Mustaka, which grows wild in the Madhya Pradesh region of India. Highly-prized for its roots, it is often used in compounding perfumes (especially since it acts as a fixative and is quite economical), in the manufacturing of soaps and incense sticks, as an insect repellent and for medicinal purposes. Associated with milkweed, Indian nard, jatamansi and fekhand, it appears in the spells of Vashikarana: It's said that a man applying it to his forehead is assured of a long series of successful love affairs!
Steam distillation of the tubers of cypriol yields 0.075-0.080% of an essential oil, the principal content of which is cyperine. The smell of nagarmotha is woody, earthy and quite lingering; it mostly conjures a hybrid between cedar, vetiver and patchouli, with fleeting touches of cinnamon and frankincense giving a churchy feel.
Reportedly, Cresp and Cavallier came upon it while in India and liked it so much that they opted to include its essential oil in their Magnifique fragrance. Somehow this is my first stumble: really? Such acclaimed and experienced perfumers were unaware of this old ingredient and just now discovered it?

What is naughty is that there is a perfume product thus named, produced by Innospec:

"A group of fragrance industry experts has given an enthusiastic review to three of Innospec's products- Cypriol, Vetimoss, and Verdirosa. The occasion was the British Society of Perfumery symposium, held last month [July] at Towcester. Lester Bowman, head of Innospec Active Chemicals for Europe, the Middle East and Africa gave a talk to the group, and Peter Whipps, a freelance perfume expert presented the three fragrances. Cypriol, which has a spicy floral fragrance, was presented in a linden blossom room spray and peach base, where it confers the rich, natural aroma of real flowers. As well as offering good odour of its own, Cypriol has a substantial floralising effect on any fragrance".

Cypriol has been rather popular lately: a component of the latest Musc Nomade by Annick Goutal as well as Dzongha by L'artisan (where it is noted as a Papyrus note, Cyperus Papyrus, a member of the same family), Rose Kashmirie by Parfums de Rosine, the newest By Killian Prelude to Love, and Tom Ford for Men ~latter claimed to be the first to use cypriol: "that slightly dirty, sensual, sexy smell...It's not the same as natural musk used to be, but it has a bit of something that some people would think slightly dirty...I think it's warm and sensual." That claim is of course an euphemism, to put it politely: they probably publicized the fact first, since cypriol use goes as far back as Xeryus, a floral woody semi-oriental masculine by Givenchy, developped by Firmenich, in 1986! And if I am not too mistaken in Eau d'Issey pour Homme too in 1994. They're seriously putting us on, it seems! 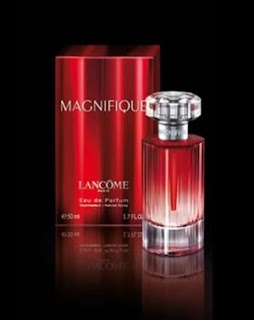 To revert to Magnifique and how it smells, Lancôme didn't veer off far on their use of their emblematic rose, a note used in most of their fragrances under one guise or another (with the exception of mighty crispy O de Lancome): many perfume lovers report a profound love for Mille et une Roses, while the peachy-rosy Trésor has its own ardent fans.
There is indeed a round rose nuance in Magnifique that veers into fruity-jammy; still, the fragrance is not considerably floral, less so rosy in the flowers-on-the-stem kind. Rather Magnifique starts as a lightly effervescent, spiked-soda sort of fragrance,with a light peppery bite and sweet fruity tonalities defying the listed cumin, as the fragrance does not present any sweaty side at all. Nor is it especially woody, which is a suprise after all the insistence on that aspect, although the nagarmotha essence does make a solid appearence; the woods are pale, pleasantly powdered but ultimately vacant-eyed and unchallenging, ready to smile and strike their best side for the camera (and yes, they do know which is their best one!). If you have watched "Diary of a Princess" with the lovely Hathaway, they're the "after" part, even though the "before" wasn't that wild either...

"The challenge was to work on wood", Cresp claimed nevertheless. Why challenge? Due to the slim number of woody juices aimed at women, since woody notes are traditionally regarded as masculine. There is of course a handful which are excellent and not masculine-smelling at all: the iconic Bois des Iles by Chanel, intent on sandalwood; the notorious Feminité du Bois by Shiseido or Dolce Vita by Dior, both focused on cedar. Then again there are fragrances that pose an androgynous spin such as the chic Sycomore, the latest in Chanel's unisex Les Exclusifs line, fleshing out vetiver.
A similar risk was taken by Lauder's newest feminine, Sensuous, a very similar to Magnifique ~albeit milkier and heavier~ composition which tries to change the demographic to a lower age group than the typical Lauder clientele according to Chandler Burr.
Therefore the challenge seems to be on the business side more than on the olfactory one!

There appear to be segments of other ideas in Magnifique: the sweet patchouli vibe of Attraction, Lancome's own less successful previous release from 2003 (which might illustrate the fact that discarded mods never trully get discarded ~and please consider the discontinued lactonic woody Feu d'Issey by Cavallier there too, will you?), or the fruity woodiness of Gucci by Gucci; maybe even the jammy earthiness of Rabanne's Black XS, as well as Dior's Midnight Poison or Elle by Yves Saint Laurent (latter two notably by the same noses).
Which brings me to an interesting question: what segregates some of the above as "modern chypres" in taxonomy, while Magnifique is a "woody"? The edges blurr in my mind and it seems to me that "woody" has now become just fancy jargon to denote edginess, a sort of fashionista It-term; I predict we will be hearing it often from now on, mark my words.
Furthermore, woody fragrances often cross borders in niche lines, being shared by both sexes, which brings me to my next point: The derivative aspect of mainstream brands trying to replicate niche trends is a manifestation of both the market's oversaturation with offerings that focus on tired vogues (the avalanche of fruity florals and trite gourmand vanillas for women, the conventional citrus woodies and screechy marines for men) as well as the desire to tap into the pool of perfume lovers who scout the micro-niche lines for something different, but cannot always have it readily accessible due to exclusivity.

Magnifique is commendable for turning its back on tired concepts. It can thus be viewed as a step in a good direction, but also as the height of cynicism in fragrance business in view of the above. I will give them the benefit of the doubt for now and hope that more companies in the mainstream sector try to diversify.

Magnifique comes in 50ml/1.7oz and 75ml/2.4oz of Eau de Parfum concentration (with accompanying Bath Cream and Body Lotion in 200ml containers) and has just launched in the US (initially as an exclusive to Bloomingdale's). It will be available around the world in September through major department stores.

For those able to read French, please visit my good friend S. on Ambre Gris for another view.