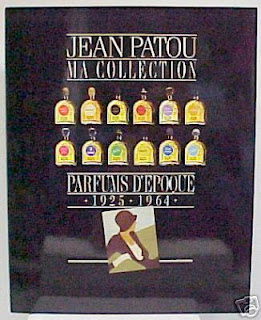 With poetic and mischievous names such as Adieu Sagesse (goodbye wisdom) or Divine Folie (divine folly) the twelve fragrances comprising Jean Patou’s “Ma Collection” pose their own little enigmas for the modern perfumphile to decipher. “Ma Collection” consists of twelve perfumes originally launched between 1925 and 1964, then re-released in 1984 under the wing of Jean Kérleo, then in-house perfumer at Patou (1967-1997) and now president of L’Osmothèque.
The formulae were reputedly reproduced faithfully to the degree that it was realistically possible, making them fascinating facets of their era in more ways than one, but earning them alas the misfortune of ultimately getting discontinued.
Despite Patou’s fame for perennial Joy, the house’s history mainly stood upon his amazing grasp of the mood of the times, translating into fashion visions, a trait also eminently apparent in “Ma Collection”. Many of the "Ma Collection" perfumes along with other 20s fragrances share an aromatic base which threads common tonalities among them. Although olfactory gems, these are scents very much embedded in their time frame. A vast ocean of difference divides them from today's fragrances.

Born in 1887 in Normandy and dead in 1936, Jean Patou was the son of a tanner and nephew of a fur-maker, joining the latter in 1907. In a few years he had moved to Paris at the small Maison Parry where he became a dressmaker earning the loyalty of a devoted clientele and opening his own house in 1914. After a stint as Captain of Zouaves during WWI, he launched his first couture collection under his own name in 1919. Success prompted him to open a New York office to cater to the demand of his numerous American clients. Impressed by the long legs of the Americans, he brought back with him 6 models (after auditioning 500), causing uproar in the French press. Later he expanded into a Coin des Sports in 1925 (with a separate space for each sport), as well as shops in the resorts of Deauville and Biarritz. 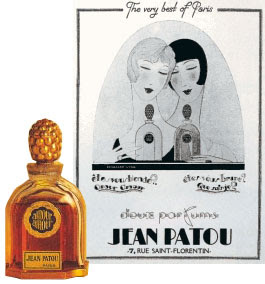 Understanding the 1920s ideal, youthful and physically fit, and admiring the American simple cuts and architectural seam lines, he was the first to introduce the casual elegance of sportswear for women and complementary accessories with his JP monogram outlined on pockets. Suzanne Lenglen, tennis Wimbledon star, wore Patou clothes on and off the court, while Ruth Elder, the American aviator, was another client. Women everywhere suddenly wanted to emulate the new lank look. But his flamboyant interpretation of contemporary art movements, such as Cubism, was the headstart for imaginative creations such as the iconic cubist sweaters. His younger sister Madeleine, an active, modern woman, also provided inspiration. His rivalry with iconoclast Chanel was of epic proportions, becoming a legend, yet it was Patou who dropped the hemline and raised the waistline, with Coco following suit.

Patou like Chanel was also among the first couturiers to include perfumes as part of a collection, a vehicle to instigate a sense of coherence to fashion houses, founding the fragrance division in 1923. He introduced his first three together in 1925, with the help of Paul Poiret's perfumer, Henri Alméras. According to Jean de Moüy, Patou’s great-nephew, they were inspired by the stages of a love affair and interestingly each was conceived for a woman of specific hair colour: Amour Amour, symbolizing the whirlwind start when heart first beats, was created for blondes; Que sais je? (What do I know?), intended for brunettes, represents the questioning whether to act upon one’s feelings; while Adieu Sagesse (goodbye wisdom), fit for redheads, signals the decision of abandonement into eros.
The bottles were designed by architect Louis Süe who also created the bottle of Joy while illustrations were by André Mare.

Upon encountering the romantic nature of Patou's Amour Amour one realises that it serves as the precursor of the floral symphony in Joy. The similarity is more pronounced at the start, with the dominance of sweet jasmine and delicate rose, while later on Amour flies into brighter, soapier arpegios of lily of the valley with a slight touch of Hesperides and salty ambergris recalling a striking gouache in sunny colours.
Although it was allegedly claimed by Marcel Billot, its true creators are Alméras and also Marius Reboul from Givaudan who contributed with the 30% inclusion of one of his bases*.
Notes for Amour Amour: bergamot, strawberry, lemon, ylang-ylang, rose, lily, carnation, heliotrope, vetiver, civet, honey, ambergris.

Que sais je? would be my choice out of this magnificent trio by Patou and not only for chromatically matching reasons; a decadent chypre with a peachy-plummy opening and a nutty aspect. Discreet touches of gourmand delights err on the side of honey and spices with a heart of generous orange blossom seguing into mossy and animalic notes which hint at some naughty affair. Resembling liquid citrines or ambery topaz mounted in gold, Que sais-je is a luxury that should be savoured in measured quantities like exquisite jewels that exhibit themselves best on black velvet.
Luca Turin likens it to Gianduja, a type of nutty chocolate candy first prepared by Pierre Paul Caffarel and recommends it for those who dislike the vanilla in Shalimar. However it is mostly reminiscent of Femme, especially the reformulated version with its sexier character including sweaty cumin. Was Olivier Cresp, responsible for the latter, inwardly influenced by Que Sais-je? I can also see it being a distant inspiration for the playful hazelnut accord in Deci Delà by Nina Ricci.
Notes for Que sais-je?: peach, honey, hazelnut wood

Dabbing a little Adieu Sagesse is akin to forgetting my everyday existence and imagining myself as a heroine in "Tender is the Night", replete with villa at the South of France and a disturbing yet intriguing background story. A crisp floral centered on the headiness of narcissus with a generous spicy eugenol accord recalling cloves and carnations and warm powdery notes due to opoponax, Patou's Adieu Sagesse shares a mysterious quality with the other two fragrances and dries into a sexy odour like a fur stole that has been kept at a carnation-filled boudoir.
Notes for Adieu Sagesse: bergamot, blackcurrant, daffodil, neroli, lily, jonquil, lily of the valley, carnation, tuberose, rose, jasmine, vetiver, musk, civet.

The "Ma Collection" fragrances are now sadly discontinued, but some of them appear online from time to time (such as on Fragrance Globe), or in shops with overstock. Eaux de Toilette come in splash or spray. The Parfum comes in 30 ml/1oz. flacon wrapped in a silk pochette. All twelve of the fragrances are sold together as collectible Eaux de Toilette minis.

Readers who will comment on the posts of the Patou “Ma Collection” Series enter the draw for a complete set of samples of all 12 fragrances.